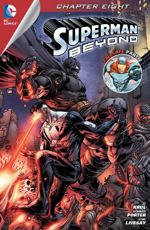 Click to enlarge
Metropolis's supercops are having a rough go of it taking on Luthor's giant skyscraper-robot. In an effort to even the odds, Walker injects himself with the nanotech he had recently extracted from Solomon Grundy's ruffians. The increased levels of nanotech surge through Walker's body, but it isn't enough. Be it desperation or insanity, Walker extracts the nanotech within his supercop partners, killing them. The powerful technology obliterates any semblance of Walker's reasoning. He's now a brute, but a brute capable of taking on the robot destroying his city.

From the Fortress of Solitude, Superman watches the drama unfold. The Man of Steel sits idle, unable to leave his stronghold due to the kryptonite meteor belt encircling the Earth. Unable to stand the madness, Superman makes a desperate effort of his own, and sets in motion an emergency strategy, one that utilizes an augmentation that will protect him from the kryptonite. It's a risky move, however, but he has no choice. Eradicator Protocol has been activated!

Story - 4: Ultimately, this is a predictable entry in the story. Just the same, I respect how it's following a natural flow from how the story was set up: hotshot supercop goes too far and Superman takes a big risk to save the day. Sure, those are some pretty obvious tropes, but they work well enough within the context of the story and presentation.

Again, the story is heavy on action, but it's surrounded by some nice plot detail, so the pops and fizzes don't take over the book. It's a good read, keeping up the quality that I've come to expect from the title.

I really only have one complaint, and it's perhaps a big one: where are Superman's lead suits? Why did he have to become Eradicator? Sure, Eradicator is far more interesting and will make for some nice beat 'em up panels in issues to come, but I can't help but wonder where the lead suits are. I actually contemplated giving the issue a three because of that, but decided to give the story in its entirety the benefit of the doubt.

Art - 3: Again, Porter steps up his game and delivers far better art than he did in the first few issues. Honestly, though, I still don't think his pencils are worthy of the title and would like to see a new art team come on board after this arc is finished. I'd like to see Trevor Hairsine or Phil Hester given a shot at the title.