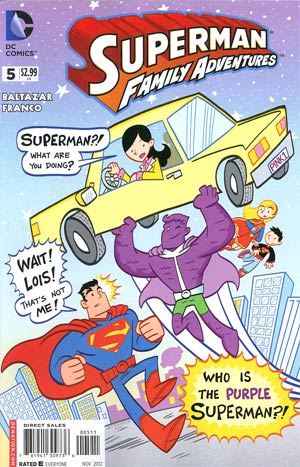 "Who is the Purple Superman?!"

Click to enlarge
This month's introductory falling meteor is a purple kryptonite pebble that Lex Luthor intercepts in mid-fall but promptly discards, interested only in more like the red Kryptonite he found in the alley last month. Otis walks out with the pebble and decides to keep it, tucking it under his hat as he heads for lunch.

After we see Jimmy fail to pick up on a clue about Clark Kent's secret identity, the purple pebble transforms Otis into a purple man with a skin-imitating shirt who draws energy from people with whom he comes into contact, putting them to sleep. When he bumps into Clark Kent, he adds some unaccountably "super" abilities to his power set!

This Parasite goes on to wreak mumbling slumbering havoc on the citizens of Metropolis. When confronted by a fully disclosed Superman, his original abilities allow him to siphon off not only all of Superman's powers but his appearance, too (including a cape but not the color palette). Seeing no other way to defeat this new and self-declared "new hero of Metropolis" than to force him to expend all his ill-gained energy, Superman puts Otis's legendary dull wits and even duller physique to work against Parasite and challenges the villain to a race.

Next, the Super Pets get a special delivery of their favorite snacks. But why is the also-included Superman action figure (also included? Ha! No.) hovering? Streaky couldn't really care less.

Later, Lex Luthor connives his way into an internship at the Daily Planet, where he hopes to gain access to secret Planet records that will aid him against the Superman Family. No such luck, as Perry basically makes Jimmy Lex's supervisor so that all Lex is ever going to get to do is make coffee and take photographs (unless there's coffee to be made). Case in point: when early reports that the Family is rescuing an ocean liner compels the Daily Planet to send its news helicopter to the scene, Lois Lane and Lex Luthor aboard, no sooner does Lex start taking pictures than Perry is calling for coffee, which Lois makes on the helicopter and hands to Lex before pushing him out the side. Thankfully (?), he has a parachute. Thumbs up from the Family, though.

His fall caught on the flagpole right outside Perry's office but getting no love from Perry himself, Luthor is driven to quit his new gig.

Superman helps him down.

Story - 3: It actually sounds much better to me when I summarize it out like that (it even makes me, you know, LOL), but nevertheless I haven't decided whether it's that the repetitive opening is getting to me or that Forrester didn't immediately ask for a reread. Either way, with this issue, the luster has started to come off this title.

Maybe it has something to do with the Smallville trick of Kryptonite having perverse effects on humans, or with allowing Parasite (one of my favorite Superman villains, from way back) to emerge from Otis (not a favorite) via that very trick. It could also be the absurd lengths they're now taking to insert coffee jokes, with or without Perry, anywhere and everywhere, to wit: A coffee maker on a helicopter as a way to get Luthor off that helicopter, which isn't any more funny to 35-year-old me than it is to three-year-old Forrester. Trust me, we reviewed it together just last night. Forrester in fact remarked that that sequence in particular was "barely a pale imitation, Uncle Marc" of cleverness.

(I always write the synopses last, by the way, and I think why the summary got me LOL'ing this time is that, for the first time, I'm giving an issue of Family Adventures a less-than perfect score even while, proofreading part of it minutes later, I'm finding something more interesting in it, albeit in a strange Monty Python kind of way, and both in brief and in my own words.)

I think I blame as well the truly disconnected-from-the-whole and none-too-adventurous-besides middle chapter, featuring the pets and a box of treats and a floating Superman action figure that may or may not have been manipulated by Fuzzy, presumably for no other reason than to toy with Streaky. Forrester was not fooled. "Stupid super cat," he muttered. "Why is he so stupid, Uncle Marc?"

Also the complete nonsense of having Luthor apply for an intern job at the Planet and get the job by rubber-stamping his own application while Perry has his back turned.

Who are either of these characters, here? Dummies, that's who. Dumbly.

Yeah, it's for kids, but this just isn't amusing. And anyway, kids aren't dumb (not all of them, anyway!), but if they're treated like they are, well, you never know what might happen. It's why I had the Teletubbies banned in Canada.

Seriously, I know people. (The thing about the synopsis being in my own words the main reason, finally, why I'm not letting the retroactive laughter while reading the synopsis for sense influence the score I'd arrived at before even starting to write that very synopsis. Was the point.)

Alright, so, Forrester didn't (and still doesn't, I'm betting) much care about any of that (it might not even all be true!), and he can't yet spot filler when he sees it. (He definitely didn't say "barely a pale imitation," but you could see it in the set of his jaw.) He did, however, NOT ask me to read it again. My father, watching from across the room, told me he was entranced by the boy's evident captivation in the reading (my father is a seriously attentive and caring grandfather, to nobody's surprise), but I could tell something was different from the previous four chapters. And that counts for me more than anything, for the purposes of this review.

Thus, 3 of 5: one point off for my quibbles, another for the perceived deflation in Forrester's enthusiasm (although I told Forrester his thing counts for two whole points... well, he'll forgive me).

(It wasn't just at the end, though, I feel I should clarify. [I'm fragmenting the heck out of this review, aren't I? It's a compensation-for-not-being-sufficiently-propelled-by-the-art-itself trick I know. {You'll get over it.}] Not only didn't he ask me to read it again, he also wasn't asking any questions or pointing at much on the page - or the screen, I should say, as we read this puppy every month on my iPad, for reasons having to do with the dudes at my usual comic book store for some reason never ordering me a first issue despite my not only having asked them to do so but also seeming to be [from everything I can humanly tell without actually hanging out there for more than is normally reasonable to make a regular and "filed" purchase {so, like, 10-20 minutes every week or two}] the single-most Superman fixated customer they've got. Or at least up there in the...)

Ok, now you're bored (if the issue itself didn't get you there first).

Which I'm guessing it didn't.

Point, then? This wasn't what I would call a "bad" issue but it wasn't nearly as good as the four that came before it. So, lower score. That's how this works, isn't it? Hold on...

Cover Art - 5: What you are not guaranteed to expect when you see this cover is that Parasite will appear inside (well, a Parasite, anyway - I'm really not especially happy about it being Otis). It's unclear thinking of Parasite was even wanted of us (I did, truth be told, but the odd thing is I was still surprised when that's where the story went), but anyway the cover strikes a good balance between teasing the story and teasing the wallet.

Are you picking up what he's putting down?