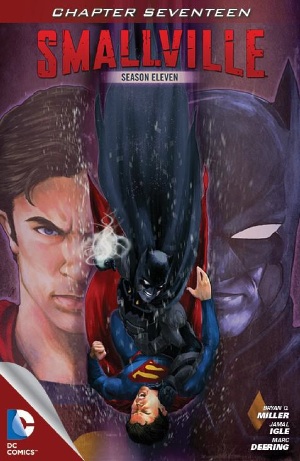 Click to enlarge
Green Arrow is pursuing Batman away from Stryker's Island and learns that Batman has a stealth "hovercraft." On that craft, Batman tells Nightwing he is relieved to have survived his run-in with the Man of Steel, on whom he has placed a tracking device. Superman, meanwhile, has flown with Bruno Manheim up into the sky for an interrogation, which leads to verifiable information about Joe Chill, the killer of Bruce Wayne's parents. Lois finds a new lead in the hunt for the designer of the teleportation suit, one Oswald Loomis. There's a Bat Signal in Metropolis.

Story - 4: There was much to appreciate about this week's chapter of Smallville. So much that I am happy scoring the chapter a relatively-high 4 of 5 but not so much that I am able to give a score for chapter 15. We'll have to continue to be patient on that one. A bit of hanging stuff was resolved this week, and some good new information was introduced - always a net positive, notwithstanding the truncated weekly form that limits exactly how much resolution and/or new information that can be reasonably provided in any one chapter.

I'll have some remarks on all this good stuff presently.

For now, I want to address the main reason this chapter doesn't rate a 5, which I'll frame as a question: Why is Batman relieved about the outcome of a fight he started for no reason?

Or, for no reason that we can reasonably discern at this point, which is precisely what begs the question. And I'm framing it as such because, while I do have an answer, it's just as based in speculation as my musings last week on why he started the fight in the first place.

Last week, I predicted the assault's eventual explanation would be one of two things: