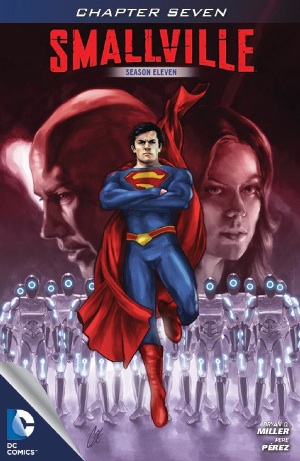 Click to enlarge
Oliver and Chloe search the Smallville cornfields for signs of the mysterious space ship and its pilot. They talk about their marriage. In Metropolis, Lois visits Mrs. Henshaw at S.T.A.R. Labs, where her husband lies in a kind of conscious coma, over which she, Mrs. Henshaw, is seriously distraught. Superman confronts Lex Luthor and is himself confronted by a military that has been led to believe him responsible for the recent incidents in space.

Story - 1: It doesn't even matter what happens in this issue, none of it needed to happen. Entirely banal and uninteresting, not to mention asinine and poorly executed, Chapter 7 is the worst this "season" so far.

Some reasons why I say that, yeah?

Opening scene: (1) Those stupid name labels, now bereft of first names for more inconsistency but no narrative gain; (2) the whole "our money" exchange between Oliver and Chloe, which fails to convey any light-heartedness despite the cliché pop culture reference or Chloe's shruggy posture, thus characterizing Chloe as rather too aggressively opportunistic for a putatively romantic context - what's she going to do, sick the Checkmate boys on him if he protests?; (3) the later exchange between the two of them over "allegory," which is confused by misplaced speech balloons on the one hand (it should have been Chloe saying "Finding the ship?" and Ollie saying "Allegory.") and misuse of the word allegory on the other - "counting your space chickens before they hatch" is not allegory, it is metaphor at best (allegory involves characters and situations that symbolize broad truths about existence - a Superman story can easily be an allegory; the chicken hatching thing cannot); (4) the sum effect of this entire scene being the impression that Chloe and Ollie don't really relate that well to one another, which is at odds with everything else we've been shown since the two of them met on television.

All we get out of this dialogic fiasco is the knowledge that Green Arrow and Chloe Sullivan were looking for the mysterious ship and are now looking for the ship's pilot. Big deal. You could have done that, and more compellingly, in a couple of silent panels.

Middle scene: Almost everything in this scene is directed at Mrs. Henshaw's complaint that Superman saved everyone but her husband. That would be fine because the complaint itself, independent of context, gets at one of the central and most interesting philosophical questions of super-hero fiction: what legitimizes a super-powered person's choices?

It also, in this case, exposes one of the central flaws that afflicted Smallville, the show: manufactured drama. Usually arising when one character is simply denied a reasonable response (and is, thus, decharaterized) to another character's anguished question, manufactured drama succeeds at nothing but sucking the very life out of an otherwise interesting situation.

Exhibit A: Mrs. Henshaw's outburst and Lois's inept response, which should have found a way to make clear that Hank was as much the hero in this as Superman - more so, maybe, given that Hank is not gifted with Superman's invincibility and other powers and was taking a far greater risk. That was an opportunity to explore important themes of heroism, which might prove useful in the margins of a tale that is heading toward Superman possibly being vilified and at odds with law enforcement because of aspersions cast against his good intentions.

Instead we got a weak character choice for Lois (she should have delivered an interpretation of the circumstances, not an apology for them - is she not supposed to be "equal" to Clark? If so, how else on earth but in situations just like this is she ever going to prove it?) in favor of plot - namely, setting up Mrs. Henshaw as a contributor to Superman's opposition, and probably a decisive one, one way or the other. (Her suicide, which Superman will fail to thwart, will be what pushes Hank over the edge.) In fact, the choices made in this issue for Mrs. Henshaw are pretty much weak all around, beginning with her assumption of conflict when she says, "All I want to do is hold his hand. Is that so wrong?" (my emphasis). This, in fact, is precisely when the scene goes off the rails (even if, technically, it's when it goes on the rails in terms of what the scene itself seems interested in - i.e., the plot stuff I already talked about). I'll allow that she might have some cause to be surly with a journalist (reporters especially are, it seems, permitted not to be real humans but only ever interested in the scoop), but what I see is a more genuine (i.e. less ironic) reason for a bit of dialogue later given to Luthor: "Never seen a stranger get that mad, that fast - you sure we haven't met before?"

There is, in other words, something fishy about this, which I submit is not some intra-narrative mystery yet revealed (as in, for Luthor, the fact that his erased memories contain knowledge of Superman's alter ego) but the sloppy and ineffective writing reasons outlined above - which also include the wholly repeated bit of dialogue (in effect, the wholly repeated complete panel) when Mrs. Henshaw and Lois first meet. Although the order is reversed, they each say the same thing to one another twice-over (in fact, Mrs. Henshaw says her thing three times - not that the raw number matters, it's the repetition-to-no-end) (paraphrased):

LOIS: The radio transmission shows that Hank made a conscious decision to help protect lives.

Once truly is enough, here. Once is fine - even the situation, this conflict, is fine if it's treated as a means to interrogate the, you know, powers-and-responsibility nexus, or whatever. Here it's just showing a woman made hostile by her grief and lashing out at the nearest object. It's one-dimensional, and bad.

The stuff about Henshaw being conscious was good detail for setting up (presumably) the painfully traumatic means by which his morality is perverted (assuming that's even what they're going to do, which if they don't, after what I've seen, I hate them), though I'm hoping that most people reading this book didn't need the pregnant pause or the repetition in "He's trapped... trapped inside himself" (not to mention, again, that other repetition). That would have been more dramatic and effective in a single line, such as "He's... trapped in there." In any case, this is the only development of any use this scene has to offer.

Closing scene: The provocation of my ire here is overwhelmingly owed to the out-of-sequence panel, which I only recognized after I left guided view and looked at the full "pages." It has to be said that this was very peculiar and bewildering in guided view, seeing Superman smash through Luthor's window, sending Luthor to the floor, then knocking with Luthor again on his feet, his back to the window. They're out of sequence in normal view, too, but the effectively wider angle allows you to more easily see the problem. And I count it as a significant problem for a "digital first" book that is supposed to be optimized for such comics-consuming innovations as guided view in the first place.

Otherwise, we have the first machinations of this new Lex Luthor against the Man of Steel, which are logical but boring in a way that prevent the development from feeling like a genuine narrative twist and more like a lazy 180 back to the very direction from which we came. It is in character and therefore appropriate for Luthor to try and defame Superman, except for the fact that this is a Luthor with only six months of memories and no real motivations other than envy and fear for even opposing Superman to begin with.

And maybe that's enough, but not when the story is told like this.

Kind of a sour belch, this issue. After last time, what a pity.

Art - 4: Pencils and colors are holding their standard, but that doesn't cut it, on the whole, where I come from.

Cover Art - 4: The cape flowing up behind Superman on this cover doesn't make any physical sense, but I get that it splits the frame and facilitates the overall design. Superman, of course, doesn't look here anything like Tom Welling, which I see simply as further general drift away from any kind of attempt at visual equivalence with the show. It's just as well. 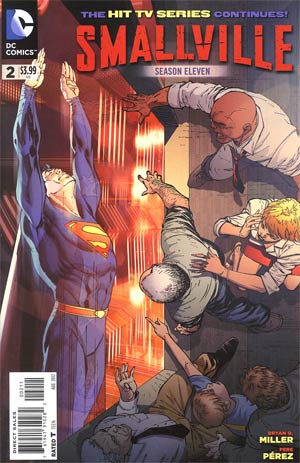 Cover Art - 4: Neither any real praise or criticism for this cover, other than to note the one guy who's hand's reflection is a mirror-image of the hand but only if the mirror was positioned above the hand, not beside it. Rotate the cover and think about it.

We're also now caught up to the end of Season 1 in the special feature episode synopses, which are laid out alongside scenes from the current edition of Season 11, further confounding their point.