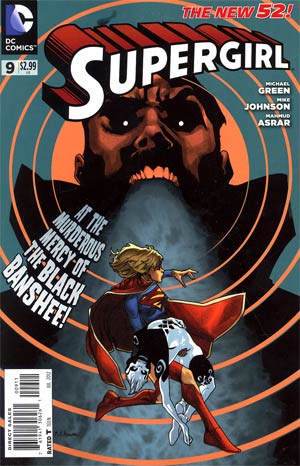 Click to enlarge
Thirteen years ago in a sheep meadow in Ireland, Tommy Smythe, his baby sister Siobhan and their mother are running from the family patriarch the Black Banshee. The Banshee wants to take Siobhan because she has similar abilities to his. Tommy, knowing his father's magic cannot hurt him, sacrifices himself to save Siobhan and possibly end the family curse. The Black Banshee cannot harm Tommy, but he can take him. Tommy offers himself in his sister's place, and as a result, his soul becomes part of the Black Banshee so long as he leaves the rest of the family alone. In present day Queens, New York, Kara Zor-El, better known as Supergirl, is caught in the middle of the conflict between Siobhan Smythe, now a being called the Silver Banshee, and the Black Banshee. This is definitely going to test the Maid of Might's resolve before the battle is over.

The Banshees trade screams back and forth. Supergirl's powers go into overload every time the Black Banshee is near her, causing innocent bystanders to get hurt and caught in the crossfire. The Silver Banshee tries to make certain Kara is taken away from the fight between her and her father. Yet, the magic that gave Siobhan Smythe her abilities is gradually taking over. The Black Banshee cannot steal the Lost Daughter of Krypton's soul as he does with humans. She must willingly give herself to him as Tommy did. The sinister Irishman delights in seeing Kara burn like a supernova as she becomes overcharged with power to the point where it feels like her body is coming apart. Not wanting to see Siobhan or anyone else killed, Kara flies headlong into the Black Banshee, allowing the villain to consume her very essence. Supergirl is no longer a threat to the Black Banshee's plans. In fact, she has made him stronger. The Black Banshee now has Siobhan in his maniacal clutches. The Silver Banshee may have to fight for her life and the lives of all of humanity to stop him. Otherwise, she may not be able to prevent him from succeeding in world domination.

Story - 3: There's been a lot of talk about the fact Superman hasn't taken Kara under his wing yet at this point in time. I personally feel this particular New 52 series isn't ready for that yet. Supergirl needs to have some adventures under her belt before Kal becomes her mentor in my opinion, but that's just the way I see things. Anyhow, this was a pretty fast read. That can be good and bad. It's good in the sense there was hardly any of the filler material present in the beginning of this series. Yet it's bad because a vast majority of the story features the Black and Silver Banshees and Supergirl beating the stuffing out of each other. Aside from the opening pages with Tommy, there is very little character development or background on the Smythe family feud. More could have been done to delve into the Smythes' past instead of seventeen pages of fighting. In spite of that major flaw, I had fun reading this issue and look forward to the next one.

Art - 4: I'm on the fence about his Supergirl, but Mahmud Asrar's visuals of the Black and Silver Banshees are stunning. This is true of most of his art in this issue. I'd love to see him with DC, especially a horror title, for many years to come.

Cover Art - 5: This image really drew me to the book. Not only did it make me curious about the story, it works perfectly as a cover for both Supergirl and a horror title of some sort. The creepy atmosphere of it will give chills to the buyer.