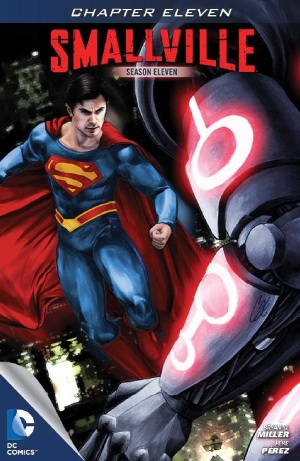 Click to enlarge
Robot Hank Henshaw and Superman fight in the Metropolis streets. Turns out Superman's efforts to talk Hank down must be supplemented with a bit of physical aggression if he is to succeed in reaching détente. Many buildings are damaged.

Back at S.T.A.R. Labs, Terri Henshaw has submitted to Superman's influence, no longer seeming to hold him responsible for Hank's accident. Hank, now just a robotic head without a body, apologizes to Superman.

Out in Smallville, Chloe and Oliver finally locate the mysterious space pilot, who turns out to be Chloe's Earth-2 counterpart. She is assailed by a still-not-completely-identified second visitor who sticks to the shadows. Upon the revelation of her identity, Chloe-2 declares that Earth-2 is "gone."

Story - 4: Here we are, eleven issues in, and if there's one thing about Smallville: Season 11 that resembles Smallville: Seasons 1-10, it's the roller coaster ride. Up one episode, down the next, this ongoing retelling of the Superman origin story has been anything but even. In other words, when it works it really works but, when it doesn't, it's a mess.

That's the basic pattern, anyway - and, obviously, from my own perspective. There was no real rhyme or reason to it on the show, and mostly I attribute it (fairly, I think) to the basic reality of the unplanned renewals and the emergence in later years of reasonably good ideas that just don't make a lot of sense given what had come before. The "Veritas" arc is a good example of this, best literally seen in the temporary addition of a "V" in the Luthor coat of arms that had always been framed in the stained glass (and always just an "L") behind Lex's desk in the mansion. That story was pretty good, but you could always just tell that nobody had ever thought of it prior to season 7.

Those were, in fact, "up" weeks on the roller coaster, if for some "down" reasons.

Season 11 chapter 11 was more an up than a down week, and it's mostly because of the intrigue in the final panels. To wit: great decision not having the pilot turn out to be Lana Lang. I've worried about a Lana appearance from the beginning of this narrative thread, and even groaned in anticipation the minute the boots started flying this week. But no: Chloe from Earth-2 instead. Awesome. (I haven't said "awesome" around here very much.) This is especially unexpected given that Chloe did not appear in either of the two Earth-2 episodes from Season 10. Kudos.

It's a choice that totally raises questions, though, as does the extra bit of physical detail now revealed on her assailant (i.e. his face, sort of). First, what were the trans-dimensional means by which she got herself here? Reverse slingshot around the sun at hyper-speed? (Yuk.) Not quite as elegant as a "mirror box," and yet possibly less MacGuffinesque, if they choose to explain it. (Which, please please please.) Also, that bad guy: you want to think Ultraman, now that you know about Earth-2, and yet you're thinking Lex Luthor, too (because of the eyes and the bald head.) And yet you're also thinking he's maybe a totally new character. (The way he's lit suggests they're still holding out a bit of mystery. Otherwise, maybe it's someone I just don't recognize?) It's good, all this wondering. Of course, Earth-2 Lex is supposed to be dead, but as the frequency with which he came back to life on Earth-1 was so great it got to be almost a defining character trait, you have to think the same might go for Lex-2.

Of course, I also wonder how they're going to clear all of this up in just one more "Guardian" installment. Or maybe they won't, but will there be room for any of this in the forthcoming "Detective" arc? How about I just reserve judgment on the pacing of this whole thing until the matter is resolved and save us all the grief?

Indeed, in that vein, I'm going to make this a quick week. For every commenter who insists the Homepage should wait for the print editions to post reviews, this is for you. Also, no particular analysis this week, for everybody else. (Heh.)

(Cannot, however, promise that for the week "Guardian" finally wraps.)

The fight scene between Superman and Henshaw left me worried about all the people that had to be in all of those buildings that had one or the other of the two fighters hurled through them, but I'm sure Supes left notes after he separated Henshaw's head from his body. That's the beauty (especially in hindsight) of a simple scene like the opening last week: establish a character trait that you then only have to imply later. This is no longer a twin-towers-destroyin' Clark Kent!

It does feel like a too-short trajectory for Cyborg Superman, though. A more satisfying battle than the ones with either Doomsday or Darkseid, to be sure - to be absolutely sure. But still. Next week's longer, more analytical review, I promise, will also have the benefit of me giving the arc a complete re-read.

Can we please get past the name labels already? Chloe and Ollie are accompanied by a label almost every time we see them, but they are easily two of the most recognizable characters in both the story and the book. We just don't need this anymore. It's a small detail, yes, but like everything else it shows judgment. Once-per-episode will do, when you first introduce a character, and only if you do this consistently every time you introduce a new character. That way, people like me say: "Thanks, that was helpful," not "Stop insulting my intelligence!" Bryan Q. Miller thinks of one twelve-week run on Smallville: Season 11 as a "mega-sode," basically equivalent to a two-hour episode on television. Once per character in all of "Guardian" would have been a-ok with me. So, next week, we'll break down the numbers on this thing. Can you wait?

I really was delightfully surprised by the Chloe-2 reveal. I also hope that, this time, she dies and stays dead. If she doesn't though, and if Tess goes full-on Super-Metallo-Tess, we might finally be getting into territory where cogent consideration of themes can take place - the nature of identity being chief among them, from where I'm sitting. That won't be anything but good, unless we hear nothing more about just how Lex's consciousness transferring procedure works, or why it won't work with a clone or even an already-occupied mind (none so augmented as his, perhaps?). I don't know. I'm still just finding this whole consciousness-transference thing underwhelming, really - it's like they figure they've used it so many times before there's no need to actually explain it this time. And so it snowballed: from the goofy whoever-applies-the-toxin-joins-the-toxin thing to the straight-up upload of Hank Henshaw into the robot.

It's all just too darned convenient.

Like no Welling in a suit because "the show was only ever about Clark, not Superman."

That, in a just world, is the kind of excuse you only get to use once.

Art - 5: I'm moving the art up from the long-running 4 to a 5 this week. It was probably the single best-executed issue overall, notwithstanding the absence of some breathtaking space vista. I laughed at the "Databank" on the disc in Hank's robotic head, and I wondered whether Chloe-2's hair was intentionally brown or whether that was more like one of those anomalies in an Archie comic where a guy will be wearing a red shirt in one panel but a yellow one in the very next panel. But, in the end, I simply found the story enabled by the art, which is exactly how it should be.