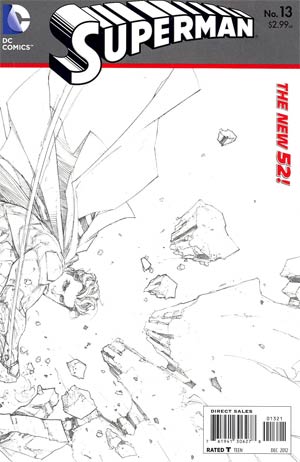 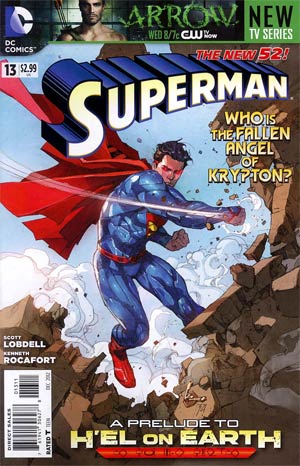 Click to enlarge
The Block is Dr. Shay Veritas' research facility. She's an old friend of Superman's that designs and tests her equipment at the centre of the Earth. He's been neglecting her facility for a while and she berates him for his lack of attention, when he used to bring her flowers and dinner. Mildly ashamed that he had lost his human sensibilities lately acting more like a 'strange visitor' he is taken aback when Dr. Veritas leans in for a seemingly tender embrace - only to collect a sample of Superman's sweat.

Veritas reveals that Superman has been bench pressing the wait of the planet for five days (5.972 Sextillion Metric Tons) Superman begins to wonder as he's never sweated before if is this him approaching his power limit or if it's because he has been underground for five days away from the sun, meaning his powers are finite needing a recharge? Then something else hits him - in light of his neglecting his human nature - he's been off the radar for FIVE days!

As Superman leaves The Block he makes a remark about Shay and her research that almost sounds like a cutting threat. Shay shrugs it off because of their history but Superman soaring to the sun for a power boost begins questioning his grip on humanity. He notes that half the populace of Earth reveres him and the other is nervous of his intentions. Being a public figure,nothing he can do will ever change that, and everything he does as Superman is open to misinterpretation - much like his journalism as Clark Kent.

Clark races to his apartment peels down to his boxers and is about to shower when he walks in on Jimmy and a female companion naked in the shower together. Having a roommate is a serious style cramper for both men but scruffy Clark just manages to make it to PGN but quickly wishes he hadn't. Perry tears a strip or two off him for not covering and filing any stories on the Superman action for five days. Clark points out that it might be a bad idea publishing the fact Superman was out of town for a week because of the negative attention it could draw in.

Lois steps in and tells Clark it's not his job to decide content, it's Perry's and though she's a producer now the "slow news week" excuse is beneath a reporter like Clark. Clark snaps and points out that Lois is in no place to question him and his morals as a journalist especially with the low level of 'magazine' crap she's been programming on PGN. Clark questions why, after only being a reporter for a measly five years, he is the only PGN reporter that believe in the news? Perry points out he isn't alone just that printed media is dying out and to keep up with the content served up in other media they have to put up with the trashy stories so they can still be there to deliver the important ones.

A while back if a reporter were fiddling with their smartphone in his presence, Perry would have confiscated it or broke it. To see Lois exempt from this has Clark even more perturbed so he uses telescopic and x-ray vision to read Lois' SMS conversation only to be even more incensed to discover Lois is moving in with her boyfriend Jonathan. Clark sullen, heads to his desk and starts browsing the web. Cat Grant jokes at Clark's hobo appearance compared to their suited office dress code but cuts short when the entire newsroom falls silent. Morgan Edge is present and is more than a little angry that his 'Superman' reporter is spending his time looking at city housing violation codes instead of his job.

Clark points out that reporters find and cover the news, not make it when it's not there. Morgan shrugs and points out he owns everything in Galaxy Broadcasting and PGN, including Clark. He also points out that if Clark can't deliver he'll replace him.

Something inside Clark snaps. Is it being in isolation for a week? Lois moving on with a new love? Perry's lackadaisical thoughts on modern journalism? Or Clark moving further into his life as SuperMAN and less as a human MAN? Whatever the reason Clark lets rip.

He has a noble moment of pointing out the ideals of journalism and his dream to be a part of it and then how somewhere along the way the profession that could once change the course of might rivers became a trashy rag and brain cell sapping TV show network. He turns to his colleagues and urges them to join him in his fight for truth, justice and the American way only for them to freeze him out. Morgan fires Clark as he resigns.

Sitting on the PGN doorstep staring at a hot dog, Clark is joined by an unexpected supporter in Cat Grant. Stunned by Clark finally standing up for himself, and inspired by his words, Cat also resigned and proposes that they start up on their own, with some real journalism rather than being forced to cover trash stories. Realizing no income is on the way for either of them Clark urges Cat to reconsider, backtracking on his words. However his sonar hearing picks up something that needs his immediate attention.

A Tripodal Curosiananium (a colossal two headed dragon) has suddenly appeared in Metropolis. Making the change into armor and leaving a bewildered Cat behind, Superman wonders if his mood is down to exhaustion, Lois distancing from him or him being a hypocrite. The time for angst is not now though as the dragon wraps itself around a group of skyscrapers. Superman attacks it for the damage to the city, secretly guilty that this creature is clearly a confused 'strange visitor'. It retaliates with a blow so powerful when Superman picks himself up he realizes he was slapped all the way to Ireland and an oil drilling facility. With no time to spare he uses his heat vision to create a thermal updraft to carry civilian workers away from the area before the dragon gives chase.

He just manages to float the workers away before the dragon's tail grabs him. Superman uses his microscopic vision to look for clues as to the creature's origin and discovers it is a construct of dead corrupted DNA, animated by something science defying - a zombie of sorts. Unable to break the creature's grip Superman uses his heat vision and the mine's natural resources to incinerate the dragon.

Superman may have been triumphant but as he picks himself up out of the flames he is greeted by his cousin Kara. Superman asks her to cut him a break, he isn't really in the mood to have yet another fight with her. Bizarrely, despite her meetings with Simon Tyco, her being back on Argo as it died and the recordings in her Sanctuary, Kara still doesn't believe that Krypton blew up and that the two of them are the last Kryptonians.

Superman is puzzled as to how and why he is being branded a liar. Kara points out the creature that he just killed was a Kryptonian creature and for it to be alive Krypton had to be too. In the mean time, a man invisible to them both, wearing a skirt and trousers, hovers above them, watching silently.

Story - 3: I'm not crazy about Dr. Veritas (maybe because I prefer Dr. Emil Hamilton and STAR Labs) but I'll run with it. I am not sure about the u-turn in Clark's personality. He JUST started dating Lucy and was finally happy to be Superman, happy to be Clark, and suddenly he's this judgmental hypocrite? I appreciate this is a new direction but making Clark a sanctimonious ass is not it - hell even in the writing Clark is questioning his actions - so is this the writer trying to please two factions? DC forcing its edgy agenda, and the FANS begging for a recognizable Clark Kent/Superman?! Whatever the case it makes the story very uneven with Clark suffering from OCD.

Superman's powers are now at a ridiculous level too, let's not go nuts guys, if he's so unbeatable how is he getting the snot beaten out of him so easy? In summary, I'm not sure about this direction at all but it's the first proper issue of the new run and unfortunately we have to suffer a crossover much like we did in Superboy with 'The Harvest' before the title can stand up alone. I think I'll give it a few more issues before I pass judgement.

Besides the Veritas character, this is nothing we haven't seen before. Lois and Clark have both quit the Planet so many times it's beyond silly as a story element. The 'Jerry Maguire' moment was honorable but obviously setting Clark up for something new. I will be honest and say so far, SO FAR, Lobdell has been delivering some ok stories, MUCH better than the horror that we suffered in Superboy. I enjoyed issue #0 so I hope the title can be more made to follow that template with Lois and Clark very soon. The cheesy humor in the narrative boxes is a no by the way - a BIG no - this is Superman, not Deadpool or Ambush Bug. I know the controversy that spoiler filled interview with Scott Lobdell unleashed, so I welcome your thoughts and comments.

Art - 4: The art is very unique, very detailed in parts and very 'scritchy scratchy' in others. The style sometimes makes some of the script difficult to follow. In places very understated. I was confused along WITH Clark when he woke in Ireland and the blow didn't look spectacular enough to warrant such a distance for example. Still over all it was the best past of the book.

Cover Art - 3: It's not bad, but comparing the Rocafort cover with Superman sporting bigger hair and this Superman. He looks far less youthful here and his armor more akin to cloth. His eyes yet again, glowing with flame - is it an edgy or tiresome look? I can't decide. I liked the stock poses for the past two covers but the AME-COMI look is getting boring now - how about something illustrating the story besides the cheesy text?