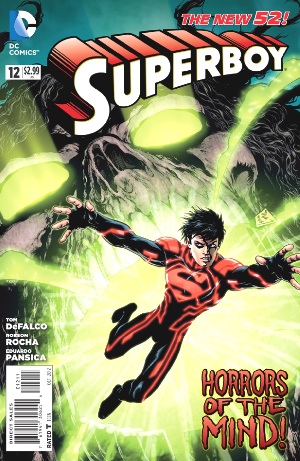 Click to enlarge
Kon-El is 'enjoying' a night out with some new socialite friends in a popular nightclub, though 'experiencing' is probably more apt. Dallas Sorrentino, a Kim Kardashian style celebrity (not famous for any particular 'talent') and landlady to the Teen of Steel has convinced Superboy to go out on the town more under the duress of Teen Titan buddy, Bunker, than personal choice.

Downing a drink called a Fruit Bomb, Kon begins to lose his sense of balance and co-ordination unlike Superman, Superboy seems extremely susceptible to alcohol. Whether it be the alcohol or a new 'danger sense' power kicking in Superboy feels a definite unease upon the arrival of a stunning redheaded woman and her two bodyguards. Dallas much to Kon's surprise makes a fast exit as the redhead approaches. Superboy attempts to use his powers to slow the trio down so Dallas can get away but as soon as he does, his TK is reflected and he is knocked down.

Shrugging off his grogginess, Kon races out of the exit to find the redhead demanding that Dallas repay her debt. Even more worrying is that the woman's eyes seems to glow with a supernatural power and so Kon intervenes again knocking away the woman's entourage and leaving Dallas unconscious on the floor. The redhead unmasks herself as Kira, Mistress of The Lost Domain and casts an illusion of some kind onto Superboy.

The illusion has Superboy in his Tron Suit fighting two demon men in some kind of barren dimension when in actual fact he is still drunkenly fighting the two bodyguards in the alley behind the club. Unable to get the upper hand while drunk, Superboy uses his TK powers on himself to vomit the alcohol out of his system. Doing so provides him with the boost of focus he needs and he makes short work of the guards. Unfortunately Kira is more than unhappy her henchmen have been incapacitated and transforms into a rotting, green, fanged witch. Her power seems to overwhelm him and that's when Kon thinks back to his initial encounter with her. Kira uses her power to reflect abilities back. So Kon decides, rather than fight back, he'll open himself up to her and hope the resulting feedback of his surrendering will take her out.

Kira is momentarily able to see into Superboy's mind and soul, the horror of something suppressed inside him knocks her out instantly and into a deep coma. As the villains make good an escape into a nearby limousine, Superboy cradles the unconscious Dallas, his thoughts a-muddle. What could Dallas be hiding? She's practically a billionaire so what could her debt be? More worrying than that, what did Kira see within him that could terrify her so much?

At that same moment, we join Detective Lure, standing in front of a strange console adorned with the S shield. On it she views Superboy's recent history. Kon's fight with Cassie, killing N.O.W.H.E.R.E employees by crashing a helicopter. The team-up with Bunker against Detritus... and even his midnight robbery which he had thought had gone unnoticed (at least with him as the culprit). It is now that Jocelyn Lure reveals that her chance meeting with Superboy was nothing of the kind. She had deliberately met Superboy and coaxed his rescue of both Caitlin and Kon-El from N.O.W.H.E.R.E. She declares she will either become his teacher or executioner.

Story - 4: The story threw you in at the deep end immediately. At first glance it was too fast but as the pacing rectified, we were given proper introductions to Dallas and Jose/Bunker and the story began to flow with some cohesion (yes, I'm in shock). I'm not sure I like Superboy being in the circle he is, it doesn't seem to be productive in his 'learning about the world and the ways of man' thing but Wonder Woman he isn't! I enjoyed Superboy's confusion with the unspoken rules of superheroism and his first taste of alcohol. Putting a spin on the concept wherein (Pre New 52) Superboy began as a big celebrity to bodyguard to one is a new take I'm adjusting to though it's far more welcome than issues #1-10. Tom DeFalco in sole charge of the writing proves sometimes that TPTB might finally have READ what they were publishing.

New things introduced: friends, the social scene, right and wrong, humor, how to dress, confusion, curiosity, conscience, fighting skill, theorizing, strategizing, story lining, tying up loose story threads. I know stating all these will get the Lobdell fans all crazy at me but let's be honest. This. Issue. Was. Crafted. Properly. Not perfectly as sadly the book has almost a year of slack to pick up but attempts on every level have been made and that's clear already.

An example is Detective Lure, introduced in just three panels, some seven months ago. Someone that was introduced that if you recall was PIVOTAL to Kon fighting the two lovers and returning to N.O.W.H.E.R.E. We never saw them meet, we never saw what was said and we only knew Kon met this stranger he met for a total of 5 minutes in a coffee shop. He then left comatose Caitlin in her care at the hospital. Seven months later I doubt even the most fanatical fan was at SDCC or KAPOWCC asking about Detective Lure. This example right here is a reason why I know feel confident the title is finally on the right road. (I'll even forgive the glaring mistake on page 5 - go ahead see if you can spot it).

Art - 4: The art was a real frustrating mix. It looked fantastic at some points then at times what I can only describe as 'scribbly.' It didn't detract from the story but was just not as easy on the eye in places. Perhaps the mental manipulation by Kira was specifically meant to be handled by a multitude of artists and inkers to exaggerate her powers, in which case it was cleverly done. I'm old school I guess and prefer one writer, one penciller and one inker.

Cover Art - 4: A pretty cool cover, I'm disliking Superboy's Tron Suit more and more these days, perhaps as it's such an opposite to Kal and Kara's, but here juxtaposed by Kira it looks pretty awesome.