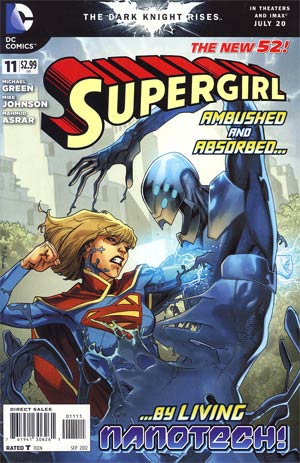 Click to enlarge
In spite of being the military's Public Enemy Number One, things are relatively quiet for Supergirl. Siobhan and Tom Smythe have tried to help her integrate with humanity. Kara ponders the wonders and the horrors of the world on which she has found herself as she flies back to the Smythes' apartment to find Tom coming out of the shower. Siobhan then teases her poor brother when she finds him and Kara together. As Tom returns to the bathroom to dress, Siobhan prepares Kara for a day out with him. It looks like Kara Zor-El might get to have moments of a normal life thanks to Siobhan and Tom Smythe.

The clothes Siobhan had lent the Maid of Might are not enough to help her fit in on Earth. She takes a piece of pizza from a waitress' tray, her powers go into overload, and a policemen attacks her. He transforms into an armored individual with nanotech morphing capabilities. Tom tries his best to help Kara with the new foe, but he becomes engulfed in the same liquid metal as the suit of this unusual opponent. Supergirl fights endlessly to defeat him. Unfortunately, he has a counter-attack for every move she makes. He can even make duplicates of himself as he begins to encase Kara in the same material as his costume. Can Supergirl stop an enemy who seems to be the perfect soldier?

Once again, Kara's abilities overload. However, she uses that to her advantage to focus her X-ray and heat visions into a point within the her nemesis' skull. A spherical device inside is the power source for the armor. Once it's burned, the liquid metal melts off Kara's attacker and Tom before our heroine is completely covered. Supergirl is victorious, but there are some unanswered questions about the man she had fought. Who sent him, and why? Kara knows he spoke the same language as Siobhan and Tom. Siobhan wants to help her. Yet the Lost Daughter of Krypton realizes she must leave to seek answers. Otherwise, her friends will be in grave danger if she stays. Tom and Siobhan agree to let Kara do what she must. They will wait for her to return to them when she finds what she's looking for.

Story - 3: On one hand, we have a good epilogue to the Silver Banshee arc and a prologue for what's to come. On the other, I do wish there were more character moments like in the beginning of this issue. At the very least a couple more pages involving Kara's attempts to integrate with humanity with the help of Tom and/or Siobhan would have been nice. Some of the fight scenes dragged on a little too much for my taste, and this seems to be a weak point in Michael Green and Mike Johnson's writing on this series.

I realize we're possibly starting a new story, but it honestly would have been great if more had been said about the soldier Kara fought. I'm not saying everything had to revealed in this issue. Yet, some tidbits here and there might have made the character feel less one dimensional.

All in all, this issue has some rough patches here and there. Some things drag on, and other things aren't explored enough. The writing does feel haphazard as a result of this. It's a very enjoyable book. However, there's room for improvement this time around.

Art - 4: Some panels look odd and seem to have been drawn in a hurry. Otherwise, we have the same amazing visuals from Mahmud Asrar. He's a great artist with lots of potential.

Cover Art - 5: This is yet another astounding piece by Asrar. It made me curious about the book's contents. That's all anyone can ask for in a comic cover.