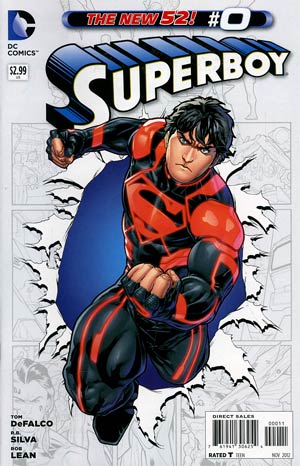 Click to enlarge
Lord Harvest thinks back to Krypton hundreds of years ago, a time when thousands of clones were created to be household drones. He talks about Kon "an abomination, bringer of horror and shame" and how he rose to lead a war on Krypton.

Even Supergirl was present during the war watching as thousands died. Though Krypton's armed forces turned the tide of battle Kon lead a small band of rebels to the weather control towers and was able to do terrible damage to the planet's climate controls.

It is a few months prior to Superboy #1 and Lord Harvest and his blood teared assistant Omen are reviewing Dr. White and Caitlin 'Red' Fairchild's progress with Experiment-02, Superboy, an apparently brain dead clone in a tank of amniotic fluid.

Omen is intrigued by Caitlin and Harvest promises they will have a meeting in the future but for now he is still halfway through explaining why he chose to clone a Kryptonian after the disaster they caused before.

The first clones were created for labour and for space exploration. Because of the intense planetary gravity, many of their astronauts were killed by the gravity pressure but farming clones and equipping them with special armor meant the clones were able to explore the solar system.

Once successful, the clones were then implemented in drug testing, medical procedures, mining, construction... their potential was developed and mass produced. At that time the clones began to rise against their makers.

Kon was the most deadly of the clones, his reign of terror caused damage to Krypton that they never truly recovered from.

Lord Harvest and Omen watch as Dr. White terminates the Superboy program. It's just as he pushes the destruct button that Superboy activates and slaughters them all. Harvest reveals that he knows about Caitlin and her potential, he watches as she rescues Superboy from the burning laboratory and reminisces the fate of the original Kon.

After Kon destroyed the weather control towers, the Kryptonians opted to kill all clones. A sleeper agent infiltrated the clone army and enabled a final assault on Kon himself... He was never found, alive or dead. The damage to the planet had been done however and though many Kryptonians lived on oblivious, the planet was beginning to die.

A Doomsday Cult rose in the planet's last years and actually wanted it to face its 'End of Days', first dismantling the space program and then discrediting anyone that researched the planet's fate.

Weeks later Harvest and Omen watch as Red tries to use VR programs to tutor Superboy. Though Caitlin is distressed that Superboy ignores a dying woman in a blaze in favor of a selfish moment, Harvest views it as his greatest asset. He also reveals he is filtering in memories of the original Kon's history through Superboy's mind as he sleeps.

He is also imbuing him with deadly combat training including adding a VR Superman as an opponent. He wants to instill the killer instinct and willingness to destroy a world the Kon and his clone army had.

Lord Harvest reveals that everything Superboy is doing and learning will eventually lead to his part in the Harvest.

Story - 5: Isn't is strange what a fresh writer can bring to the table after another loses his way?

Although it is essentially a side plot to 'The Harvest' it plays through much faster and covers all the ground in a far better fashion. The streamlined retread trims the fat and even offers a few clues to the upcoming stories. I'm keen to discover why Kara is present in ancient Krypton and how Harvest is able to recall so much, not having been there, what were these 'documents' and how did he come across them.

I'm not keen on the original Kon, he seems rather one dimensional. The last page also reveals H'El, a new character in Superboy's future. My suspicion is that Kon might even BE H'El but we'll wait and see.

I'm glad that The Harvest wasn't retread as that is something I'd rather pretend never happened. Also not keen that they still had the slaughter in the lab included, I still think Superboy shouldn't kill...

This gives issue #13 and Superboy the opportunity for a nice fresh start. Thank goodness.

Art - 5: The art is a great strength of the book. It's unique, and fits the storytelling far better now than it ever did. R.B. Silva and Tom DeFalco have great chemistry as a Writer/Artist team.

I'm not a fan of any of the #0 covers, this is far from the worst but it could be far better.

Wish this Superboy could pull off 'honorable' rather than 'bullish'.