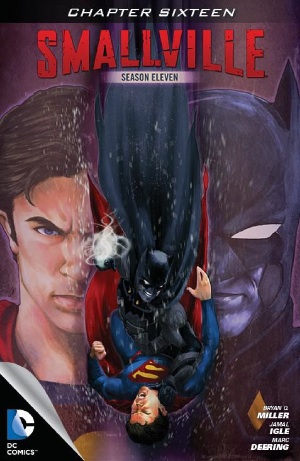 Click to enlarge
Chloe and Oliver discuss the limited progress S.T.A.R. Labs is making in their investigation into Chloe-2's spaceship and the "Crisis," as well as Chloe's ongoing unease with having watched Chloe-2 die. Oliver offers her the distraction of figuring out where the "gibberish" emails he has been receiving on his phone are coming from just before hearing about the episode over at Stryker's Island and dashes off as Green Arrow.

At the penitentiary, Batman and Superman fight. Batman reveals that his glowing chest symbol is not just a design feature, it's red sunlight that, he knows, robs Superman of his abilities, and explains that he put this together based on a range of clues - the similarity of Superman's S symbol with those of the "flying terrorists" from Season 9, blueprints of Zod's citadel, the Kawatche Cave drawings, and files he found in the wreckage of Checkmate's headquarters.

Batman then reveals that he started the fight not simply to fight but to misdirect Superman's attention away from Bruno Mannheim and Nightwing (whom Arrow intercepts; they fight, using the weapons of both weapons and wit). Superman, upon hearing that Batman wanted Mannheim not to free him but to learn about the man who killed his (Batman's) parents and understanding that some kind of misunderstanding does indeed appear to be lurking underneath all the tension, promptly ends the battle and flies off to find Mannheim and pluck him away "for a moment."

Story - 2: Unlike last issue, which served so well to initiate some rising action that I couldn't decide how to score it (yet, see below and last review), this week we have a sort of mini-climax wherein it's clear we can see a resolution to the current conflict between Superman and Batman but, unfortunately, in a way that exposes that conflict as both unnecessary and even a little bit stupid.

Oh, text label reminding us that the blonde couple who are always together and who look and act for all the world like Chloe Sullivan and Oliver Queen are in fact Chloe Sullivan and Oliver Queen... I didn't miss you, despite the fact that you've been reconstituted as first names only. And why is it now only Chloe and Oliver that draw you out? We haven't seen you since chapter 11, and do you know whom - and only whom - you there identified? Yeah, Chloe and Oliver.

Smallville, we recognize Chloe and Oliver, ok? All of us, and we remember their names. Will you please give us a break?

Otherwise, this scene is unremarkable and doesn't have much in the way of new information other than that Chloe is still freaked out by the death of her alternate self (and that expression while she's hugging Oliver suggested to me there might be Helmet of Nabu stuff as yet unmentioned) and that Ollie is getting weird emails on his phone (which will presumably connect somewhere with the Crisis arc).

The fight scene is a whole lot of I don't know what. Let's consider.

Requiring a mere flick for our boy to send Batman flying is definitely appreciated (because we all know that Batman should really never be able to compete with Supes like this to begin with), but between that and the red sunlight tech it's still not clear whence Batman derives the strength to send Superman flying with enough force to carve a trench into a concrete floor (forgiving the apparent absence of rebar in that concrete, but maybe that's a comment for the "Art" section - actually, not every panel is clear on this and at one point at least they are definitely outdoors, so ok I'll just accept that we missed some action between the end of the last issue and the resumption of the scene this week and that that wasn't concrete but just the ground, but that still doesn't explain why Batman would be strong enough to carve a Superman-shaped trench into any terrain, regardless of red sunlight or Supes' "variable-density control or gravity negation" - which, I mean, brilliant deduction, Batman: the only possible possibility!).

Also, not sure what happened to the red solar gloves in general this week - there's that bit where Superman has a grip on Batman's shoulder and something rips on the back of Batman's glove, which at first I thought was maybe supposed to be a mechanism that triggers the solar effect but upon closer inspection looks way more like a simple tear of the leather reinforcement on the back of the glove. But so dramatic!

Actually, I'll just say it: I found the entire Supes/Bats fight to be more than a little ridiculous, not only because there appears to be no logic to exactly how the "red sunlight" affects Superman - although there's dialogue to indicate it should "theoretically negate" his abilities, and getting knocked through the ground by Batman would certainly seem to indicate as much, he somehow manages (among other things) to super-speed up to Batman and break the device right there on Batman's chest, so who can really say (even considering some possible attempts to indicate that a brighter space might wash out the red solar effect, but this line of thought is probably just me trying, reaching, struggling to connect some dots that I'm not even sure are dots) - but also because of the way it seems to serve, in terms of storytelling, as "misdirection" of an altogether extra-narrative sort: not just distracting Superman from Batman's real target (Mannheim) but distracting us from the peculiarity of Batman having deduced the whole red sun angle but not whether or not Superman is a friend or foe, or whether he might have allies capable of intercepting Nightwing.

The fact is this entire high-action/low-expectation issue comes across to me as furious all-around misdirection indeed - from the fact that nothing much is really happening in this arc. What, for instance, do we learn here about the "black box," the only available clue to the "Crisis," introduced at the end of the last arc? That S.T.A.R. Labs "thinks they've found a way to access" it (my emphasis). In other words, nothing. Nothing further about Joe Chill, either, or about the teleportation technology and where, if truly at all, Lex fits in. Of course, you can't expect every issue to touch on every storyline (that would be some seriously fragmented storytelling), and I think I wouldn't even be concerned about the lack of forward motion on any of those lines in this issue were it not for the eventual pointlessness of the red sunlight Bat Symbol and the equivalent senselessness of Batman's assault on Superman to begin with.

Maybe it will be explicitly addressed. We're only a third of the way through "Detective" at this point, after all - plenty of time for Clark and Bruce to come to terms and share their backstories and c. (that path being now laid with Supes absconding with Mannheim at the end, clearly for interrogation). But it's weird, just the same, frankly, this idea that Batman would seem to have pursued such a narrow range of homework on the "alien," and feels in the moment more like an attempt to hit some familiar comic book convention (e.g., they meet > they fight > they reconcile ["So sorry for the misunderstanding!"]) than to truly explore the characters and their motivations or circumstances.

I wanted to like this, I really did. That was my first reaction - "Hmm, blueprints, symbols, the cave drawings, Checkmate ... er, Checkmate? Wasn't Waller mind-wiped by John Jones or something? Will have to ask somebody [ahem] to remind me how Checkmate got files on Clark, but anyway ... ok."

Then I thought about it.

I am content to wait for an account of Batman's motivation here, but otherwise it just seems all too convenient. He starts a fight with a super-powered being just to afford Nightwing the opportunity to apprehend Bruno Mannheim, whom Batman had already apprehended prior to Superman even being on the scene? Does. Not. Compute. And is furthermore confirmed as pointless and absurd when Superman simply flies down, picks up Mannheim and carts him off.

Seriously, though, I accept the tech as evidence of Batman having a contingency plan in the event of Superman not only intervening but also proving to be evil or whatever, but this all seems like a plan unworthy of Batman. I mean, this "misdirection" would have been much more sensible if Batman had apprehended some other high profile inmate, taking the attention away from Mannheim (in other words, misdirecting it) so that Nightwing could go after him. This way, though, you do get Mannheim out of his cell so that he can run out into the yard where Superman can easily pick him up, all fussless and mussless. Can you imagine if it turns out that that was Batman's plan all along???

Also, what I'm really objecting to is the preemptive strike.

Instead of interesting drama and/or intrigue and/or character work, we got a pair of battles - one (Superman v. Batman) predicated on some really shallow assumptions on the part of its instigator, who in the Smallville universe may well not turn out to be the "world's greatest" detective but who is clearly supposed to have some hardcore sleuthing chops and yet who seems to have completely the wrong idea about what Superman cares about or whether he can be reasoned with; the other (Arrow v. Nightwing) a formality, a piece of logic that balances the equation left over from both Batman and Superman having immediate and regular partners, and about which I have only this more to say: good character work. Most welcome.

My guess is the explanation for Batman's aggression will be one of two things: