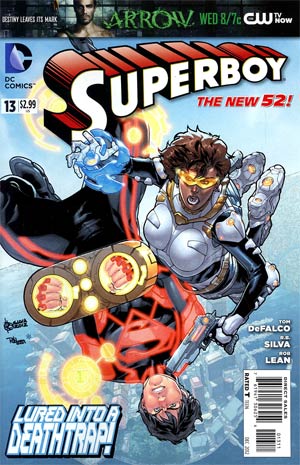 Click to enlarge
Superboy wakes to find Jocelyn Lure in his bedroom aiming a laser gun at his head.

Using his powers, Superboy hurls Lure across the room into a pile of money, she retaliates by catching him in handcuffs that nullify his powers. Lure tells Superboy she had only popped in for a friendly chat when she discovered the stolen money and as her day job is as a police detective she had to know where it came from.

Superboy admits 'borrowing' it from Center World Bank but grabs Lure and flies them to a building far away so they can focus on the 'friendly chat' and not the money. Superboy remarks on the similarities of Lure's super armor and that of N.O.W.H.E.R.E soldiers. Jocelyn buries that theory and asks Superboy to trust her.

Superboy points out that he DID trust her once, but when he did Lure let Caitlin 'Red' Fairchild fall into the hands of Harvest and ultimately The Ravagers. Lure admits she had let him down but strikes a bargain with Superboy. If she finds Caitlin then Superboy would be duty bound to help Lure when she needed him.

Elsewhere the attackers that had tried to kidnap Dallas from the nightclub are nursing the comatose Kiva. The man that wants Dallas is head of a mysterious organization and seeing the damage inflicted on Kiva by Superboy he instructs his assistants to retrieve Dallas' "protector".

The next morning Superboy meets Dallas for the first time since the attack. She shrugs it off and asks Superboy for an advance on the rent as she is short on cash, unsuspecting Superboy hands over bundles of cash and she promptly begins to spend it.

Jimmy Olsen arrives in New York, his assignment from Lois? To chase down the rumors of 'Superboy' while Clark is busy in Metropolis. Jimmy and Superboy pass one another not realizing their connection and Dallas goes into shopping overdrive. For a rich socialite, she doesn't have much cash, but she also has something that Jocelyn Lure doesn't; a true sense of fun. At that moment Lure is back at her console and interrupts a tracking search on her computer from the 31st century to put the tech to use searching for Caitlin Fairchild.

Across the city Superboy is accosted by a badly groomed hired gun who instructs him to sit in the car to meet his employer. This thug, named Bonesmasher, steps aside so his speedster colleague, Streak can attack Superboy. The original plan to whisk Superboy away quietly fails as both Bonesmasher and Streak realize they are battling a living weapon.

The police are immediately on scene, Superboy being seen as the attacker in the garish costume as opposed to the victim. Taking no prisoners the police fire a wave of bullets but the overkill never reaches its target as Superboy uses his TTK to stop them in mid shot. Literally being able to be faster than a sea of bullets surprises Kon-El, as it's something he'd never really put into practice.

H'el watches Superboy's actions, surprised that he wears the S shield, disappearing to his hideout he vows to do research on this non Kryptonian but only after he meets the son of Jor-El. Back in New York a very angry Jocelyn suits up and heads to the war zone Superboy has created.

A dazed and confused Dallas realizes with a heavy heart that her tenant 'cutie' is actually a superhuman and watches as Superboy, wanting to be left alone, starts hurling cars around and decimating the area. Jimmy sees this too and, while recording the action, calls Lois back at PGN, sending her live footage. Lois watches closely and sees the immediate resemblance to Superman pondering whether Superman has been keeping secrets from her.

Suddenly, silently, a gas pours through the streets knocking everyone out while also blocking everyone's view. Superboy is ushered into an alleyway by Lure who assures him the gas will erase the public's short term memory. They'll never know he lost control nor for some, ever existed.

Superboy realizes Jocelyn is far more than a policewoman that enjoys cosplay and demands answers from her. Lure refuses to answer his questions, reminding him of their bargain. Opening a portal to Caitlin Fairchild's location she ushers him through.

As Superboy arrives on the other side he is confronted with not only Caitlin but the other survivors of The Harvest - The Ravagers!

To Be Continued... in The Ravagers #5 (ending this storyline).

Story - 4: Not a fan of Jocelyn Lure, she's obviously from the future, having access to 31st Century technology but her character is quite abrasive and honestly quite uninteresting. Superboy is growing slowly, learning about theft (though still not returning the stolen money) but this device about him living real life is thoroughly underused. I am not buying his attachment to Dallas, as she too is quite annoying, but I understand she is integral to an upcoming arc so I'm happy to let her 'Paris Hilton' away in the meantime. I am not sure why Kon's supporting cast are all essentially the same. Poor characterization on the writing team's part or inept mental conditioning from N.O.W.H.E.R.E?

I liked Jimmy and Lois providing a link to the Super books as opposed to the title's heavy 'Adfomercial' style and their characterizations were pretty close to their depictions in the Superman title so that's a plus point. I am not liking the constant inner monologues from Kon, they were actually explaining far too much that R.B's art was easily able to tell at the same time. I like the teases of mystery far more than in the Lobdell run, they feel far more natural to the story now but please stop the incessant adverts in story for other books. Perhaps DC doesn't realize how annoying making a title a paid for advert of other books is?

By the by, Superboy is no Hulk.

Art - 4: Some lush artwork. Nice to see R.B's rendition of Jimmy Olsen again! If I have one critique it's that the TTK computer generated effect seemed to knock the art backwards. Perhaps it was the overuse of this technique coupled with the large monologue boxes that are tarnishing the art.

Cover Art - 4: Pretty cool cover showing Jocelyn in action, though her chest seem to be a bit of a focal point. It would have been nicer to see Superboy turning the tables. He seems to be taking a bit of a beating more often than not on the covers.