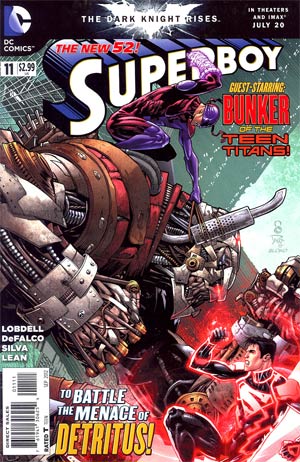 Click to enlarge
Superboy and Bunker are hanging out in Kon's new apartment. He is renting from a wealthy woman he met in a coffee shop. When Bunker questions Superboy's sudden rich lifestyle he discovers Kon robbed a bank not being able to differentiate between rob and borrow. Bewildered, Bunker suggests they go into the city. They discuss the fact Superboy has only ever learnt about life from books or the internet, with no favorite foods, hobbies, TV shows, etc. The only constant has been the S shield as it's the only thing Kon has ever owned.

Fate brings them to a tattoo parlor where Bunker adds to his back tattoo and Superboy has a barcode S shield stamped onto his right arm. Just as it's finished drying, a commotion outside leads them into costume and conflict.

A giant robot reminiscent of Metallo is attacking the city. His name is Detritus and he has the ability to absorb machinery and grow to colossal size. The villain explodes into hundreds of pieces as Superboy lands a powerful punch. But before they can relax, Detritus shows another Metallo-like ability and begins reassembling himself. Bunker continues to fight in vain to slow the robot's reassembly.

When he confronts Superboy, Detritus realizes Kon is extremely powerful and attempts to absorb him. With an explosion of TTK Superboy rips off Detritus' armored plating until he is a small, human-sized android.

Stripped of his shell the android begins to share a tender moment with Superboy where they realize they are very similar. No real memories, god-like power and no direction in life. Just as Superboy is about to let his guard down, Detritus, who was playing possum all along, attacks.

Superboy punches the android into millions of pieces this time with the parts soaring for miles into the river. Even if he could reassemble all of himself it would take a long time. Bunker suggests they make a quick escape before the authorities arrive, while Kon realizes saving the city from the android was his first act as a hero, albeit a bit more lackluster then he had imagined.

Story - 3: This was the first standalone issue the series has had and it was a mixed bag. There was a lot to face palm to and a lot to smile about.

I really didn't like that Superboy robbed a bank but I DID like the fact he couldn't grasp he had actually done wrong. Not sure I like him falling into wealth and a classy apartment. Not sure if the sudden wealth was a story device or a long term continuity thing. We'll have to wait and see. I like that he has finally decided to live up to the shield but not that he rushed into a tattoo.

Despite the lameness of Detritus this was a decent story that allowed a bit of character exploration. Incidentally this issue marks the first time Superboy has spoken more than monologued. Nice that he's finally ditching the moody angst.

The book seems to be headed back on track with DeFalco back in the credits I'm wondering if there is a correlation with his presence and the ratings the book is getting... hint hint.

Art - 4: The art was really spectacular in places this month but in some scenes it seemed a little rushed. RB Silva delivers a brilliantly composed narrative. I loved the tattoo reveal even though it was the pre-New 52 shield.

Cover Art - 3: A nice cover but just like the last issue with the Wonder Girl cameo, this issue seems like an interior scene thats just had lots of text slapped on. I would love to see more from Scott Clark but with more focus on the lead character.