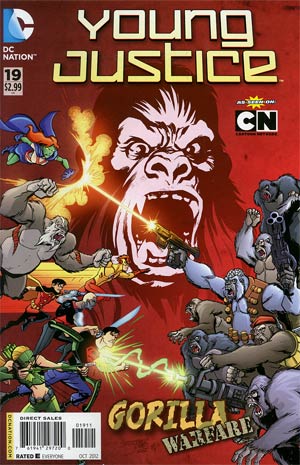 Click to enlarge
M'Gann regains consciousness and is greeted in a telepathic link with several apes named Grodd, Solovar, Boka and Primat. Her head is full of questions so Solovar tries to elaborate on their origins.

Two years prior an old woman and a thin man arrived and began capturing and experimenting on apes. First was Mallah, they operated on his brain and he defected to their defense against his ape brothers. Next they killed a large gentle ape and transferred her oversized brain into Tolifar, creating the evil Ultra-Humanite.

Mallah and Ultra-Humanite built a spider-like body for the thin man's brain simply known nowadays as The Brain. They proceeded to build a metal spired 'Gorilla City' where all apes where then enslaved. Only an ape known as the 'Holy One' was able to get away.

The experiments continued, gifting the apes with high intelligence, awareness and sentience. They then introduced Kobra Venom, which tore Grodd's body apart with excessive muscular enhancements. A hidden side effect was that this also gave the apes telepathy. A secret they had kept hidden from everyone until Miss Martian caught their attention.

One last act of evil was that Ultra-Humanite and The Brain had all their children captive along with the other Leaguers now powerless with inhibitor collars. Grodd expresses surprise when M'Gann reveals she doesn't lead the team especially when he points out she has the most powerful of all their minds. When the apes return Wolf to M'Gann she agrees to help them with their plans of freedom.

Meanwhile the Leaguers are wall mounted by cuffs and clearly weakened. Robin, ever resourceful picks the locks of his cuffs quietly waiting for the opportunity to escape.

M'Gann disguised as a guard approaches the nursery and easily defeats the armed forces there. Using a keycard swiped from the unconscious bundle of injured men M'Gann transforms into an ape herself and leads the children to safety.

Grodd brings in a (faking) unconscious Wolf as an offering to The Brain and with their attention on the animal, Robin sneaks his hands out of the cuffs. With the babies now safe Grodd sets in motion the next part of their plan.

Robin slips to the floor and scatters smoke grenades across the base and mistakenly tasers Grodd. Grodd is less than pleased and grabs the Boy Wonder just as he frees Superboy. M'Gann and the apes restore a mental link and they realize that both the Leaguers and Grodd are on the same side. With that clear the team attacks their foes. Superboy knocks out Mallah, Artemis blinds The Brain with a gas arrow and Robin uses a shock pad to knock him out. Grodd attacks Ultra-Humanite swearing revenge for Tolifar's death. He does so telepathically, a mistake as the villain then reveals this to The Brain.

A weakened mechanical mess, The Brain activates a five minute self destruct of the city and all parties depart for safety.

Regrouping later Solovar vows to rebuild the city for the surviving apes to live in peace.

They thank 'the Holy One' for their safe passage to freedom and bid Congorilla farewell in his future no longer living as the Holy One. Grodd sees Congorilla swinging away and growls that he will rule the new Gorilla City one day.

Later Robin is going over his case notes and logs out of the computer, only as he rises from his chair it's five years later and he is no longer the Robin we knew...

To Be Continued... In YOUNG JUSTICE: INVASION!

Story - 5: Constantly the best book DC has been publishing.

A fantastic last chapter to lead into the 'five years later' relaunch of the series. I loved the twist at the end and the inclusion of Congorilla.

Art - 4: From the Super apes, to the cute babies, to the evil villains, the artist was clearly enjoying this issue and it showed in brilliant style.

Cover Art - 4: Not sure about Grodd's face in the background but otherwise a great cover. The characters could be a tad bigger in my opinion but it's by no means a big deal.