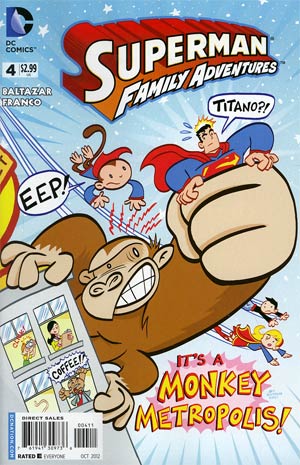 "It's a Monkey Metropolis!"

Click to enlarge
This month's falling meteor is a red kryptonite pebble courtesy of Bizarro, still hanging out and playing with the kids at the Fortress of Solitude. It lands in Perry White's coffee and is promptly drunk by a normal-sized Titano, in Metropolis from Haley's Circus for a Daily Planet photo shoot, who proceeds to transform into a giant - you might say titanic - version of himself.

Superman arrives to save Titano from the effects of the Red K but gets caught in Titano's mighty paw whereupon Titano curiously pokes and prods at the Man of Steel. Then Beppo appears (previously disguised as Clark's pet monkey Bob Kent) and distracts Titano with the latest monkey gossip, allowing Superman to escape Titano's grip only to be treated to the great overgrown monkey's Red K eye beam, which splits Superman's personality so that his dark side comes out into the open as an independent entity.

Negative Superman causes some mischief, even posing as one Clark Kant, before Titano mashes him back into the real Superman with a combination of manual force and magic red kryptonite barking, which causes the Red K pebble to regurgitate, reversing their super-sizing effects.

And who should find the Red K? Lex Luthor, that's who. Nyah!

Story - 5: I was the skyscraping Daily Planet to Forrester's giant Titano this month, as the young fella climbed up on me to fall nicely into the Superman Family's latest adventures.

These stories have hit their stride, as far as I'm concerned.

I've joked about the repeated introductory hurtling meteor trope, but I'll stop doing that if their continued use continues to be handled as well as it was this issue, what with the play on dimensions of both time and space (i.e. scale) in the storytelling. This was pretty much a masterstroke and much more rewarding for older readers like me than the intermittent Donnerverse references that had hitherto been our primary sustenance (beyond the experience of reading to the next generation).

My only real complaint with this issue involves the Red K - too many different kinds of effects for Forrester's liking. We liked the nod to pre-Crisis continuity with the noted unpredictability of what it will do to Superman, but not that he is "exposed" via lasers from Titano's eyes. Twice removed and too convenient.

Clark Kant, however, was a scathing critique of pure reason without the multi-syllables. (Ba-ding-boom!)

And, so, Lois clearly knows Clark's secret and would appear to be on side with the dual identity. Forrester and I are both cool with that.

Art - 5: "This work is exactly what it's supposed to be - iconic, expressive and simple. And all of those things consistently.©"

Cover Art - 5: Again, pretty much perfect. Teases what's on the inside without giving away either the story's basic premise or its climax. Truly good for all ages.

Forrester's Final Word(s): "I want another one." Don't we all.