November 21, 2010: Will Reeve Pays Tribute to Chris and Dana 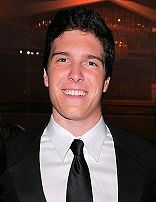 Will Reeve, was only 13 when he was left an orphan after his parents, Dana and Christopher Reeve both passed away. Now 17, Will attended the Christopher & Dana Reeve Foundation's Gala in New York recently to pay tribute to his parents.

Dressed in a smart suit and looking like a younger version of his actor father, the confident 17-year-old stepped back into the limelight last night.

Will was attending a charity gala in memory of his parents, along with his older half-sister, Alexandra, 25, and half-brother, Matthew, 29.

His parents Dana and Christopher set up a foundation which funded research into spinal-cord paralysis cures, a cause now supported by their son.

'To me, Mom and Dad were the people who forced me to eat broccoli and to turn the TV off to do my homework,' Reeve told an audience earlier this week.

'I never consciously viewed them as inspirations then, but their heroic efforts shaped who I am today and who I hope to become tomorrow.'

Read the complete article at DailyMail.co.uk.

Thanks to Chris P. Bacon for the lead on this news.