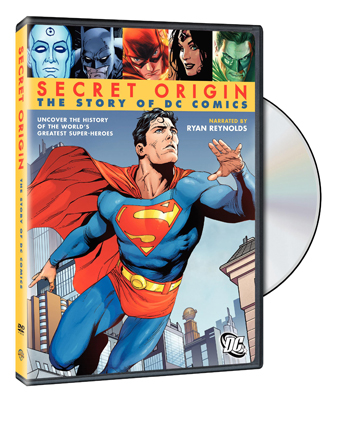 This morning, the Superman Homepage reported on the upcoming direct-to-DVD "Secret Origin: The Story of DC Comics". We now have the official Warner Home Video Press Release and a first look at the DVD cover. "Secret Origin" will be available November 9, 2010. Here's what Warners has to say:

Behind the amazing tales of Superman, Batman, Wonder Woman and a host of other well-known characters is the equally impressive story of the challenges, creativity and triumphs of the company that brought those characters to life. Secret Origin: The Story of DC Comics is both a celebration of the best writers and artists in comics and a thoughtful exploration of 75 years of DC Comics history.

"From the bans to the breakthroughs, from humble pulp beginnings to the literary rise of the graphic novel, the story of DC Comics holds a mirror to an ever-evolving enterprise and the society reflected in its comic book pages," said Diane Nelson, President, DC Entertainment. "It's a true American story - Secret Origin: The Story of DC Comics is a riveting, exciting, surprising revelation of that fascinating history and the men and women who forged it."