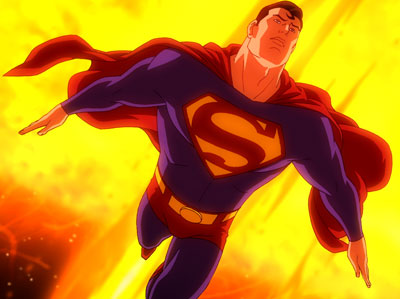 According to an exclusive report from The Hollywood Reporter, the Grant Morrison - Frank Quitely series "All-Star Superman" has been confirmed as the 10th in the DC Entertainment direct-to-DVD animated features. The cast has been announced as including James Denton ("Desperate Housewives") as Superman, Christina Hendricks ("Mad Men") as Lois Lane, and Anthony LaPaglia as Lex Luthor. Supporting cast has been announced as including Ed Asner ("The Mary Tyler Moore Show") as Perry White and Frances Conroy ("Six Feet Under") as Martha Kent, plus Linda Cardellini, Arnold Vosloo, and Matthew Gray Gubler. Here's some more information from the trade paper's exclusive blog entry:

Written by Grant Morrison and drawn by Frank Quitely, the story begins with the Man of Steel (Denton) oversaturated by radiation during a rescue mission near the sun, accelerating the degeneration of his cells. Knowing that he has a limited time before he dies, Superman sets out on a journey that sees him revealing his secret to Lois Lane (Hendricks), giving Lex Luthor (LaPaglia) an epiphany on humanity and ensuring the safety of Earth for when he is gone. . . .

The film is due to be released in the spring.