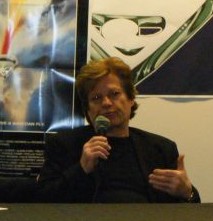 Here's my brief report on Ilya Salkind's appearance in New York City today at Mike Carbo's New York Comic Book Marketplace. Despite low turnout due to weather, there were many comic dealers there and all the guests seemed to have showed up. Of course, readers of the Superman Homepage would have particular interest in Mr. Salkind's appearance.

If I had to describe Mr. Salkind, I would say he is a super-gentleman. Not only was his discussion very entertaining (he is quite a character and had a lot to say about the production of Superman: The Movie), but he was one of the most approachable guests I have ever met. I had the opportunity to talk with him for a good long while before and after the discussion and ask him all sorts of questions and discuss our mutual love of the character.

On the subject of a DVD release of the final three seasons of Superboy, he said that his best guess is that Warner Brothers is waiting until Smallville ends to finish releasing them and that it is all up to them. He said he personally wants them released as he thought the first season was sub-par and that the best has yet to come out.

As I said before, he had many great anecdotes to tell such as the first meeting with Brando, Robert Redford nearly being cast, and his satisfaction in making peace with Richard Donner at the premiere of SUPERMAN II: THE RICHARD DONNER CUT.

One of the most interesting stories he told was how Steven Spielberg's agent rang down their phone aggressively lobbying to direct Superman: The Movie. At this time, the release of JAWS was imminent and Alexander Salkind wanted to "wait until the big fish movie comes out" as Ilya said. Well the big fish movie came out and they tried to get Spielberg on but by that time his interest in the project had passed. Amazing to think of how much different it could have been. He also said that Jerry Goldsmith was in fact the first choice to score the movie but as has been told, the continual push back of the release date made him unavailable and then came John Williams and the rest was history.

If there was any complaint, it is that the organizers of the show did not give Mr. Salkind ample time during his discussion. Only a half hour was allotted for discussion and that was not nearly enough time. It is unfortunate that the organizers did not have the foresight to think that this man may have a lot of great info to give to the fans. Hopefully this will change if Mr. Salkind (hopefully) decides to come back to the East Coast for a convention.

He did say that he would be making more convention appearances, notably in Anaheim, CA in the coming months. He said that he thoroughly enjoyed meeting the fans and as I said, he was totally cool and totally approachable. Fans of Superman: The Movie should not miss a chance to meet him. He is a true gentleman in person.