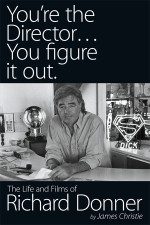 YOU'RE THE DIRECTOR, YOU FIGURE IT OUT
The Life and Films of Richard Donner

Richard Donner is one of Hollywood's most important filmmakers, the driving force behind iconic hits The Omen, Superman, The Goonies, and the Lethal Weapon series. His films - which have grossed billions of dollars at the box-office - touch generations of moviegoers, yet little is known about the man responsible for their success.

In the only authorized biography, author James Christie charts Donner's transformation from wayward New York youth to Hollywood hotshot, revealing a power generator personality every bit as large as his blockbuster movies.

Based on extensive interviews with Richard Donner, his friends, family members, and many of those who have worked with and for the filmmaker, You're the Director... You figure it out goes behind the scenes on butting heads with Steve McQueen, sidestepping Marlon Brando's eccentricities, exploring the secrets of these and other big screen collaborations with Gregory Peck, Richard Pryor, Jackie Gleason, Mel Gibson, Bill Murray, Jodie Foster, Sylvester Stallone, Julia Roberts, Bruce Willis, and many more.

The book can be pre-ordered for US$24.95 plus postage at Bear Manor Media's website for delivery in November.

Update: James Christie's website has 5 pages of preview work including quotes from Christopher Reeve and Margot Kidder available in a PDF file.