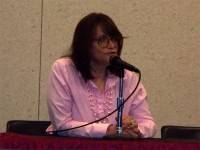 The Q&A was a great time. Margot Kidder just took questions from the audience. The main topic was obviously Superman. She also covered her own life and childhood growing up in a small town in Canada. Her love for hockey. Past movies like Amittyville Horror and Sisters came up as well. She talked about her journey from not knowing anything about Lois when she got the part, to now where she meets people from around the world that see her and immediately think of that iconic character.

Margot also talked about working with Rob Zombie on Halloween II. She said it was great fun. Unfortunately a lot of her scenes were cut. She said the studio didn't want the same picture Rob did and as a result the final product was a bit different.

The Donner Cut of Superman II was another topic. Her dislike for the producers was still very apparent. She said of Superman II (theatrical release) and the Donner Cut that you can visibly see a difference on their faces and that film doesn't lie. They were much more uptight and forcing scenes for Lester, where the stuff for Donner was much better. She had some great funny anecdotes about filming some of the stunt scenes with Christopher Reeve and she said she has a great collection of photos she could probably release one day.

One interesting question was about the US TV show The Big Bang Theory. Ms. Kidder was not aware of the show. But the question was if she had considered doing a guest role. They've already had on other sci-fi people and mention them all the time. Having THE definitive Lois Lane on would, I'm sure, be something the show's producers could work into a funny story line. She liked the idea and told him to call her agent. All in all, it was a great time and I found myself wishing we had more than just an hour to hear her speak.