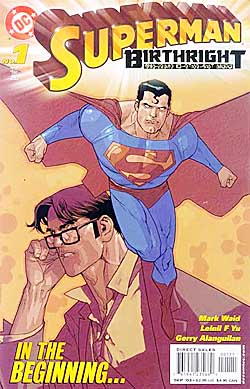 ComicBookResources.com conducted an interview with comic book writer Mark Waid at Saturday's Long Beach Comic Con, and, amongst other things, asked him about his thoughts on Superman movies.

As a Superman fan, what are your thoughts on the 5 Superman movies to date, and what would you like to see in [Zack] Snyder's film?

Waid: First, I'd like to see "Superman Birthright" in Zack Snyder's film. [Audience laughs] You know what else I'd like to see in Superman in Zack's film? Brandon Routh, because I thought he was a great Superman. I really thought he nailed it.

The first one changed my life, second one I have grown to appreciate even though at the time it crushed me because it was more of a comedy. Third one I loved at the time. It led to my first angry meeting with John Byrne; I stood in line at a convention to get his signature on something, I was still a fan, and I had just seen "Superman III" and liked some of the stuff in it, and I mentioned it to John Byrne and it didn't go well. He started screaming at me, and that scarred me for life. I'm just a guy in line! Don't yell at me for liking "Superman III!" Yes, it sucks in retrospect, but I was like 17, I didn't know! [Audience laughs]

And then the fourth one, the fourth one kills me. I was there on opening day at the Grauman's Chinese Theatre in Hollywood. I was going to move cross-country to take the job at DC Comics as an editor, and I told them I couldn't start until Monday 'cause I have to drive out and be there on Friday for the premiere of this movie. I've got to be there. It's the world premiere. So I went in all full of expectation and I came out a wrecked man. [Audience laughs] Not what I expected. And I'm the one guy who a) likes "Superman Returns" and b) I think that history will judge it more kindly than it was judged at the time.

Read the complete interview at ComicBookResources.com.