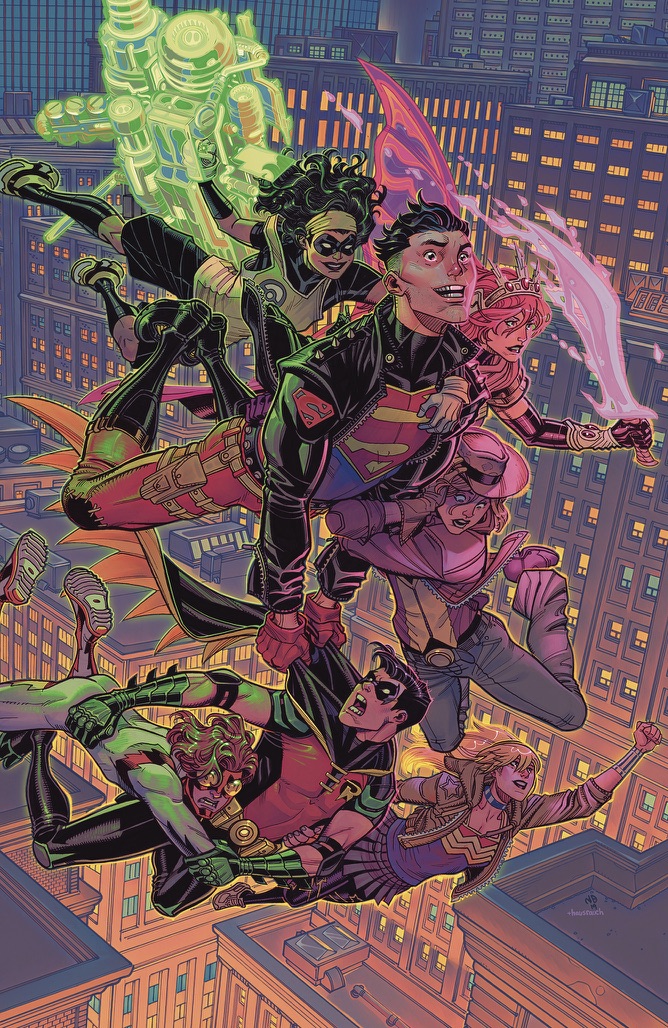 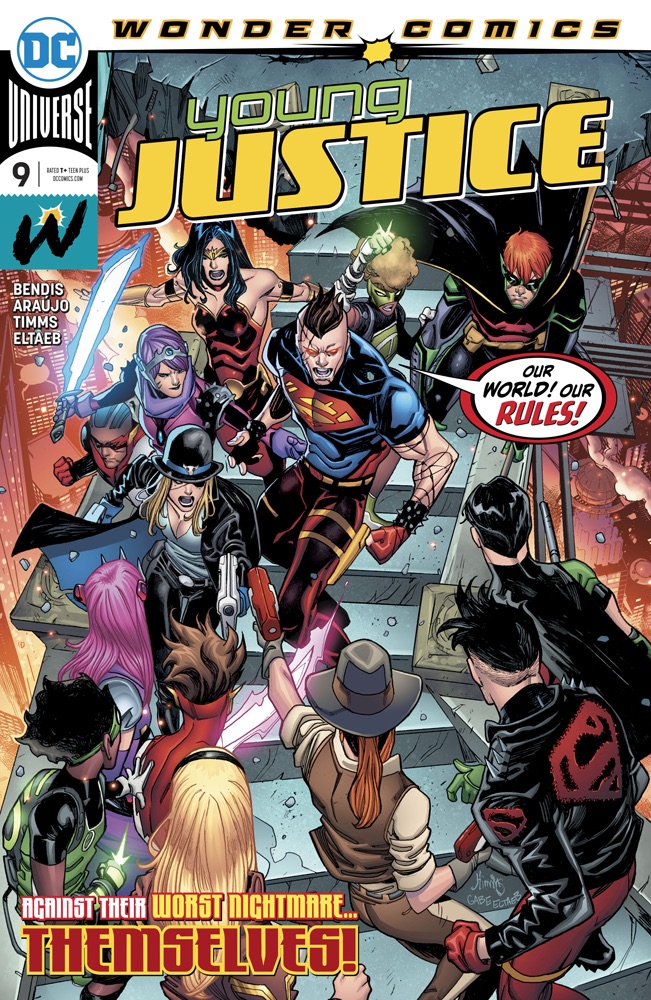 Reviewed by: Keith Samra
Click to enlarge
The team are still stuck on Earth 3, but through a series of flashbacks to months earlier, we learn a little more about The Teen Lantern. Months ago, TL whose real name is Keli, stumbled across a murder with her friend Marcos, of what seemed like a stranded Green Lantern in her native country of Bolivia.

She is then given tech that gives her semblance of the power of a Green Lantern. We then cut to the present, where Hack, the Earth 3 doppelgänger of TL, tries to steal her tech. We end with Robin, Impulse and the Earth 3 Batwoman, formulating a plan to take down the YJ team of Earth 3, before they head back home.

Story - 4: Though this issue was paced at Bendis speed, I found it rather intriguing and exciting. I must say that Bendis got me with his take on this Teen Lantern. Rather than a GL ring, she actually possess tech that gives her the appearance of Green Lanterns power set. To make matters even more interesting, Bendis alludes to the fact that the original keeper of the tech, may actually not even have been a Green Lantern at all. I'm skeptical that he may not even be an alien either.

What seemed like an execution by a Bolivian "gangster" actually is a seed that I'm sure Bendis has just planted, which will bear fruit in a much later issue of the series. Though it did seem that Keli's backstory was influenced by the film Alita: Battle Angel (and the subsequent Manga and Anime that preceded it), Bendis did a decent job of showing Keli's naiveté, and longing for something more from her impoverished life, and taking the first opportunity she could to escape it. I'm actually curious as to what happened to Marcos after she left.

Aside from Teen Lantern's humble origin, we got very little else, save Tim's plan to take the other team down, and the promise of Jinny Hex story for the next issue. All in all, not a bad issue, much better than what I was expecting.

Art - 5: John Timms is joined by Andre Lima Araujo this issue, as Araujo tackles the pages featuring Keli, before she became the Teen Lantern. Araujo has a very clean and crisp style, which actually gave a lot of flavor to the pages of Keli's life before she received the power she now wields. I loved the pages where she first learns to manifest the power, and then flies off, with everyone watching her take flight.

Timm's rendered the pages featuring the team on Earth 3, and they have their own flair to them. I really like seeing how he contuse to make this book and the characters his own. I really love the feeling of nostalgia I get when I see his art, as it reminds me of the more expressive and cartoonish style of art in the 90s. I feel that there is way more that can be done with this type of style, than say the more heavily detailed Jim Lee-esque style that has been the standard for DC for quite some time now.

The last 2 pages are great, with the way the story just flows, and can be followed without reading the captions or word balloons. Timm really makes Robin very cool looking, and makes me really want that DC multiverse action figure of him by Mattel.

Gabe Eltaeb's colors help tie the art together in the issue, much like a thread does with 2 different materials on clothing, really great work.

Cover Art - 4: The cover by Timm, literally has nothing to do with what goes on in the issue, and is misleading to say the least. I feel that this may have actually belonged to another issue altogether, and ended up being published with this one. With that said, it is well drawn.

Variant Cover Art - 4: Again, this cover has very little to do with the story in this issue, but does make for a good pin up. Nick Bradshaw is very underrated.