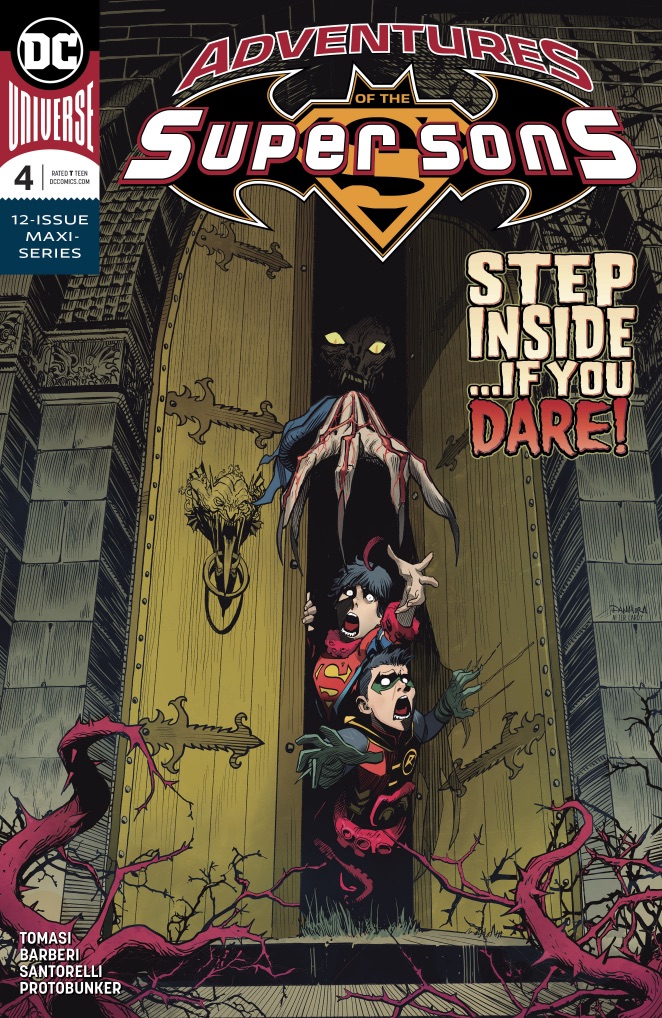 Adventures of the Super Sons #4

Scheduled to arrive in stores: November 7, 2018

We open where last issue ended, as the Space Cabbie rescues the boys from The Gang. Rex Luthor monologues about his plan to take over Earth, using the Hypercube.

Meanwhile in space, Space Cabbie's taxi/ship starts to have issues with his "hyperspace drive", and they all end up on an unknown planet.

Damien takes both Superboy Red and Blue to get help, as they both are unwell, from the events of the previous issue. They end up at a house on a hill.

Joker Jnr double crosses everyone, as he knocks out Space Cabbie, and steals his taxi/ship and leaves the planet, so he can better hide from Rex and The Gang.

Damien and the two Jon's get pulled into the mysterious house. As Damien gets his bearings together, he finds Jon, now once again whole, as Superboy. They are both attacked, and as they make their escape, they come across a pair of old, overweight versions of themselves in the house.

Story - 5: The best thing about this book is that it caters to all ages. I love that I can give a copy of this book to my young nephew and also my best friend of 22 years, and they both can enjoy it for what it is, adventures of two sons of the World's Finest.

This was a very good transitory issue that got the boys away from their peril on The Gang's planet, and dropped them right in the middle of their next arc.

The simplicity of the way that Tomasi writes, as he resolved the Superboy Blue and Red subplot, without a lot of technicalities... "I guess it wore off", explained so easily in one sentence.

With The Gang plot, not yet resolved, I'm sure we will see Rex and his cohorts soon enough, as well as Space Cabbie and Joker Jnr, but for now, the latest and most intriguing plot angle, is the two older Super Sons, seen on the last page.

As usual, I can't wait to read the next issue, Tomasi has a knack to use the last page cliff-hanger as a hook to keep you interested, and see what happens next.

Art - 5: Carlo Barberi is the perfect artist for this book, even though Jorge Jimenez was the original artist to render the adventures of the Super Sons in the first series, no one could continue the magic of this book so well, as Barberi has. His Manga influenced style is perfect for escapades that Jon and Damien will surely get into.

The pages that stood out to me the most were the ones featuring Rex, and his plans to take over the Earth. I always love these pages that feature almost prophetic scenarios, as we see what could happen, if our heroes fail to stop the villains. In this case, how an alien child will enslave the Earth, in the image of one of the greatest villains of the DCU.

As the same as last issue, Barberi managed to show us two sides of Jon, as Superboy Red and Blue, by still drawing them exactly the same. And the on-going frustration that Damien feels having such a super best friend.

I loved the rendition of Space Cabbie's taxi/ship, as well as the guest shots of both Lobo and Guy Gardner.

Lastly, the older versions of Damien and Jon just made me wish I could read the next issue right away, and not have to wait a month until it is released.

Protobunker's colors are as exceptional as usual, I can't say enough about his palette. It is a perfect marriage with the line art.

Cover Art - 5: Dan Mora's covers continue to impress. I love the low key horror vibe to this composition. Surely makes you want to pick it and open to see what happens inside.