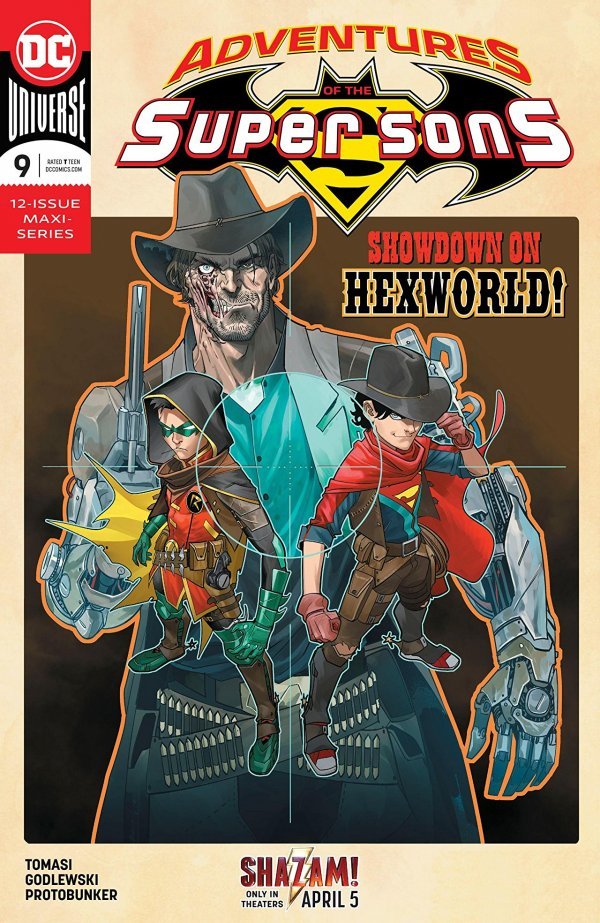 Adventures of the Super Sons #9

"The Good, The Bad and The Sons"

The boys end up on a sister planet to the prison world that they were incarcerated on last issue. A western world with a Cyborg Jonah Hex as its protector. The boys help Hex on a few missions, with the help of their Green Lantern Cadet friend. As they find a way off the planet to save Earth from Rex Luthor and his Injustice Army, the Green Lantern helps to reprogram Hex, and they all head off planet together. Next Stop the Injustice Army.

"You heard the man! Hang on to your Hats" - Robin

Story - 5: What a joy this book is to read every month. Only someone as talented as Tomasi can write a series that is so fun, with such Silver Age concepts and not have it be silly whilst being silly fun at the same time.

This issue reminded me so much of the 80s Filmation animated series BraveStarr. Maybe it was the concept of the western world, or cybernetic cowboys and whatnot, but I was reminded of one of the most wonderful animated series from my youth, and I'm sure that it's purely coincidental, but thank you Mr Tomasi for taking me back to my childhood.

Before I move on, again I would reiterate that this series and these two protagonists deserve to star in their own animated series. I really hope that WB looks into this.

Other than the pure joy of this issue, the one thing that I took away from it was that the boys think for themselves, and decided to tackle Rex Luthor and his Injustice Army on their own. They truly live up to the name of Super Sons, and for sure are their father's sons.

Art - 5: Scott Godlewski is our fill in artist, and at first glance and the untrained eye, I find it hard that anyone would ever be able to distinguish his work from Carlo Barberi's.

Godlewski brings a very animated vibe to his work, much like Barberi, but his has a different flair, and also has an Image Comics feel to it. I was reminded greatly of Ryan Ottley's work on Invincible as I read this issue.

Loved his take on Jonah Hex, and the GL cadet, while his Jon and Damien are fully on point, they bare the resemblance of Barberi's and even Jimenez's work. This is what I love, when an artist keeps the same look and feel of the regular art team.

The page that I would love to own is the double page splash with the credits, the boys and Jonah on horseback, simply awesome.

Protobunker's colors bring life to the art of Scott Godlewski, simply one of the best in the business today.

Cover Art - 5: Dan Mora's covers are simply the best in the biz! I really hope to read and review an interior drawn comic by him. What a fantastic composition, definitely poster worthy.