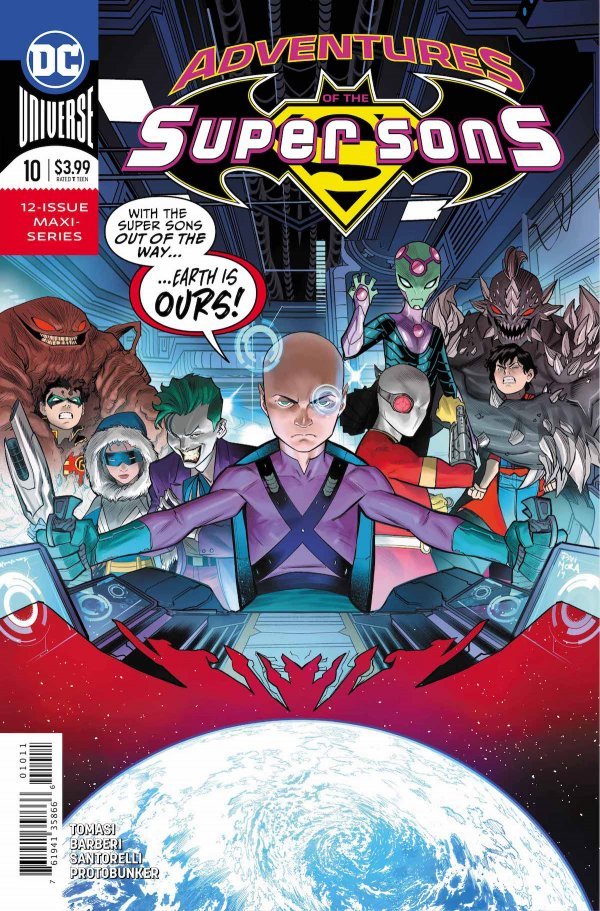 Adventures of the Super Sons #10

We open with an elderly gentleman reading a story to a couple of young children, the last great adventure of the Super Sons.

We then cut to our main story, as we see Rex running his own monologue, regarding his evil plan.

Rex is interrupted by the boys as they come in to relieve Rex of the hypercube, and stop him once and for all.

With Rex and his army gaining the upper hand, the boys witness Rex kill Jonah, but when all seems lost, the cavalry arrives. In the form of Tommy Tomorrow, Kid Joker and the elder Robin and Superboy from the dream machine.

Story - 5: As per usual, this was a fun issue to read. Tomasi manages to tell a story within a story here, as we find a couple of younger kids in the future being told exploits of the boys. My guess is that the younger kids may share a kinship to the boys far in the future.

Our main story keeps chugging along rather nicely, and we see that not everything is all peaches and roses with the boys. Rex has been written to be quite the formidable antagonist to the boys, like a season villain in a show, and the issues help give an episodic feel to this run.

I love Jon's sense of humor and his established personal back chat to himself, as we see him in his establishing shot this issue. The back and forth with Damien is also always a delight, as Damien argues that you can't always put "super" in front of everything and call it a power, regarding Jon's attempt at "super ventriloquism"... Like "batarang" is any better as Jon replies. It's these moments that make this book such a joy to read.

We are coming in to the end game of this 12 issue arc, and as Tomasi is wrapping up this year long arc, he is managing to keep the intensity and interest level really high, looking forward to its conclusion.

Art - 5: Carlo Barberi continues to knock it out the park with his art. Barberi manages to capture the most dynamic parts of the action, and elevate it with his awesome animation like style. Case in point would be the entrance of the boys on the train, and then Damien with his "superhero landing".

The scene of Jonah getting shot in the head was very 90's Image-esque, but struck a very emotional reaction with it, especially the following panel with Jon holding him in his arms.

Matt Santorelli's inks are crisp and sharp. A wonderful marriage between Barberi's pencils and his inks, an art team that's at the top of their game, I do really hope that they get another awesome project at DC, fingers crossed for Young Justice.

Protobunker's colors bring life every panel on every page. Even in the limbo pages with the negative spaces, the boys looked so stark and colorful against the white background. They popped as you'd expect, but more so that they were handled with such vibrancy.

Cover Art - 5: Dan Mora's covers have been fantastic. Yes at times they don't match up 100% with what's inside, but they are enjoyable regardless.