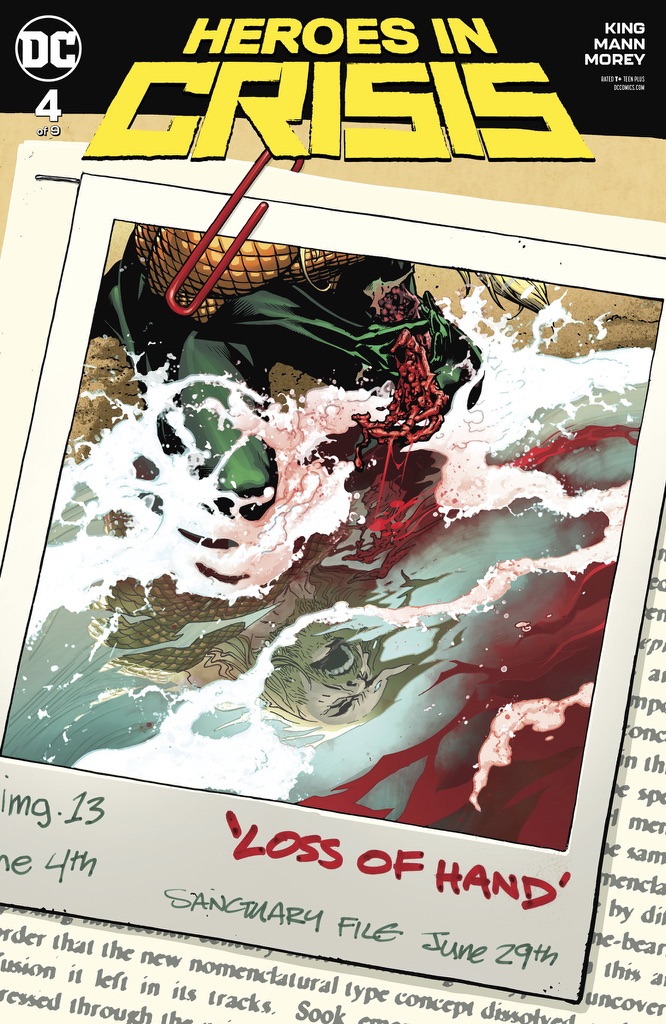 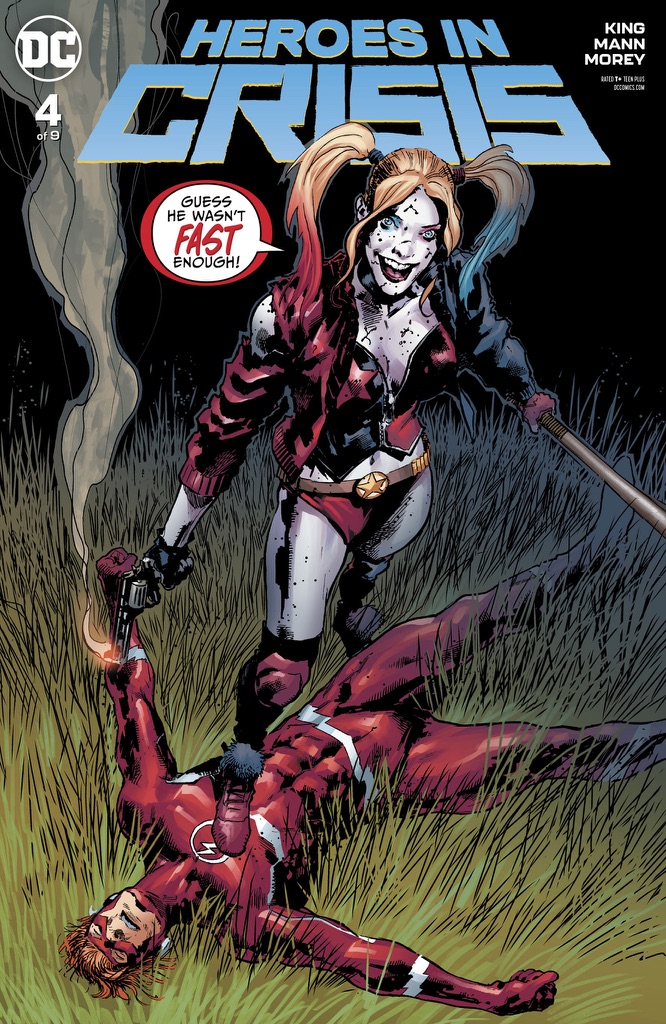 Reviewed by: Keith Samra
Click to enlarge
We open with Garth of the Titan's getting drunk in a bar, and passing out, causing Donna Troy to have to carry him home.

We then cut to Sanctuary, where Batman and The Flash investigate the crime scene, to determine who killed Wally West. Flash is quick to point the finger at Booster Gold, but Batman assures him that it was Harley Quinn.

Wonder Woman interrogates Booster Gold, using her Golden Lasso. Booster recounts the events of the day everyone was seemingly killed by Harley Quinn. He is stunned at the fact that he was left alive, and was the only one that woke up.

We then cut to Lois and Clark's apartment in Metropolis, where they discuss the fact that someone named "The Puddler" has sent Lois videos of those being treated at Sanctuary. Lois asks Clark what he wants her to do about it, while at the same time reminding him that "this is news", and if she doesn't report it, The Puddler will find someone that will.

Somewhere at that moment, Batgirl meets up with Harley, where the two fight, and then eventually give in and embrace one another.

Booster lies in a holding cell at the Hall of Justice, where he is visited by Blue Beetle, and he asks Booster if he "did it," Booster says that the Golden Lasso revealed that he didn't, however Wonder Woman told him that he may have convinced himself that he didn't, so that's what he could perceive the truth to be. Blue Beetle busts him out, in the hope that he will help prove his innocence.

We end with Superman, Wonder Woman and Batman at the Batcave, as they discuss what has been transpiring. Wonder Woman is angry that Blue Beetle broke out Booster Gold, when Superman tells them both about the leaked videos to Lois. Batman gets angry that Superman kept this information from them for a few days, and is even more annoyed when he learns that Lois is reporting on it, and as of 35 seconds ago, the story is posted online.

Currently at that time Batgirl and Harley Quinn are flip flopping over rooftops, when Batgirl gets the alert of the story. She tells Harley that this will most likely change the world, now that it's out.

Story - 4: Well this isn't the easiest story to follow at times, but it was enjoyable, and the constant guessing game of how it will end, and who the mysterious player behind the scenes is.

Building upon the last issue, while still reeling from the events of the first, Batman's obsession of finding the truth behind the death of the heroes and villains being treated at Sanctuary, with the help of The Flash set the tone for the rest of the issue, as the growing frustration that a place that was meant to heal, turned into a final resting place for those that were troubled by the trauma of their recent pasts. This leads all the way to the end, where Wonder Woman and Superman are in the Batcave, where Superman breaks the news about Lois reporting on the recent videos she's been sent.

All evidence seems to point to the fact that Booster is indeed innocent, and that Harley was responsible for the deaths of the others. But seeing as how we are over half way through this series, I'm expecting Tom King to throw us a curve ball sometime soon. As stated last month, I'm guessing Sanctuary may have gained sentience, much like Brother Eye way back in the mid 2000s during Infinite Crisis.

Booster gets broken out of a holding cell by Blue Beetle, and the whole "bros before heroes" moment was great. I used to love seeing this duo in the past, and their misadventures. So for once, I'm glad that DC decided to play loose with continuity, and bought back Ted Kord from the grave.

The whole Harley and Batgirl fight and then hand holding to the hug, felt... Confusing. I can see what King was trying to do, but it just felt so weird. It's like I've stated in the past, King's writing can be very hit or miss. Even now I'm wondering, what sort of mission have these two taken up, and where are they headed exactly.

Lastly, the scene at Lois and Clark's apartment was great, with Clark's dilemma of reporting the news, over keeping the confidentiality of Sanctuary and his peers. King reminds us, that Clark foremost is a reporter, and can't ask any reporter, even his wife to bury the story. Also the double jeopardy of, if Lois does drop the story, The Puddler will just leak it to another reporter that will report on it.

Art - 5: I'm glad that we have the series regular artist back with Clay Mann this issue, and he brings his utmost best work yet. His use of perspective in many panels for the camera angles gives us a full view of the surroundings and mood of the situation at the present. Case in point, Booster's recount of the tragic events, as Wonder Woman interrogates him, we get the scenes play out, but we see them in an almost 360 degree view. Absolutely great work on these two pages, and as usual, the interview scenes are a true delight. Loved seeing Donna Troy's frustration, and Black Canary just walking out on hers, but the best would have to be Batgirls, where there is no dialogue, but just her showing her bullet wound, from the front and back.

The intensity is there in the fight between Batgirl and Harley, with the emotion breaking through as they connect with one another and hug. I'll admit, it took me a couple of takes to understand what was going on, and even though it wasn't my favorite scene in this issue, Mann drew it beautifully.

I loved the opening scene, where Garth of the Titan's is getting drunk, and Donna Troy carries him home. With the two page splash of her walking past a mural of the Teen Titans, the best part is that it is done in the style of the great Jose Luis Garcia Lopez. Also I loved that it had the credits for the issue in graffiti all over it. This double page splash is art I would love to own one day.

The Lois and Clark moments were also a real highlight for me. Mann managed to show the intimacy between our hero and his wife, all the while showing the dilemma Clark felt, having been caught between he and his wife's careers as reporters, and also being in one of the leadership roles of the Superhero community. This sort of emotion is hard to portray, but Mann managed to do it with great success. Plus he draws a very hot and sexy Lois.

Clay Mann's depiction of Batman has always been awesome to look at, and he really managed to inject personality into him this issue, from his investigation of the heroes' deaths at Sanctuary with The Flash, to his frustration with Clark, as he revealed that Lois knows about sanctuary and has the leaked videos.

As good as Mann's Batman is, his Batgirl is a little off. I'm not sure if he redesigned her costume for this series, but the small domino like mask, with the barely there pointy ears, and teeny cape really don't work for me. Also the fact that he draws her quite busty, is something I would expect from an Ed Benes. She really looks more like Batwoman, than Batgirl.

Lastly, I want to finish with the other lead of this series, in Booster Gold. Mann drew the scene of him being interrogated by Wonder Woman and her lasso, with such earnest and regret in Booster's face, you just feel sorry for the guy. And when Blue Beetle shows up, busts him out of the Hall of Justice, the "bros before heroes" fist bump left me with a sense of urgency for the next chapter.

I love the colors Tomeu Morey brings to this project. They are vibrant and yet not over powering at the same time. Sanctuary brings the warmth of the Midwest, with the golden fields, while we get the coolness of the Batcave and shine from the monitors that light it up.

Cover Art - 3: Not a big fan of this cover, I can't quite put my finger on it, whether it's the composition, or just the way the figures are drawn. Not the cover I would pick to have in my collection.

Variant Cover Art - 5: The 90s continue to make a comeback with these variant covers, with this month's Aquaman losing his hand to piranha. Rather well timed, with the release of the Aquaman film in theaters currently. Ryan Sook did a wonderful job with this "snapshot" moment.