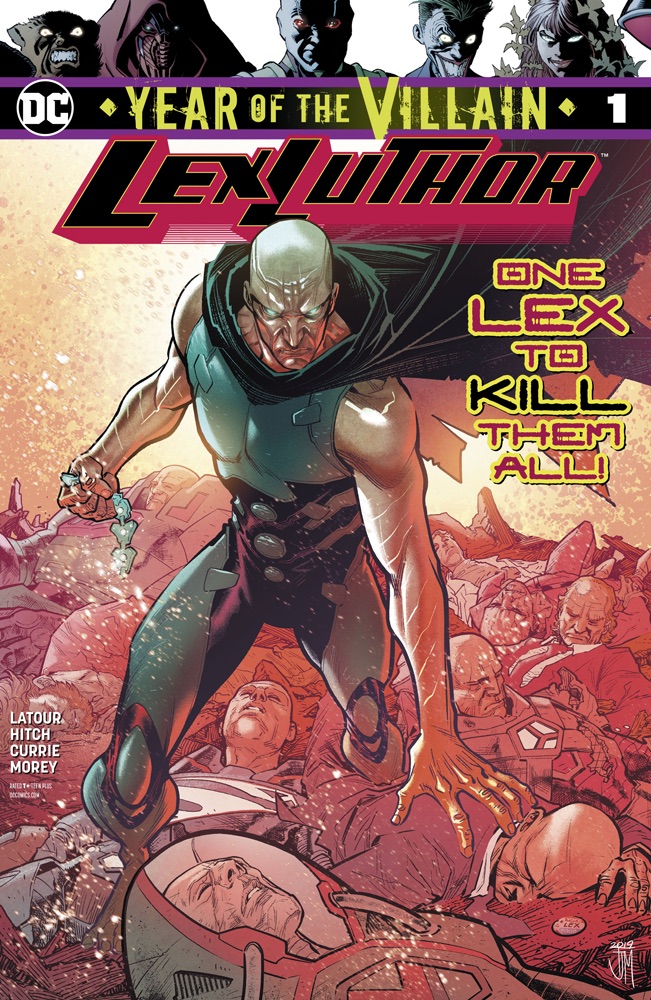 Lex Luthor: Year of the Villain #1

Reviewed by: Neal Bailey
Click to enlarge
On Earth-38, Lex Luthor appears to a younger version of himself and asks him if he is dangerous, like many of his doppelgängers, or otherwise. He reveals that he is using Perpetua's power to further the goal of the doom of reality.

Lionel, Lex's father, rises and tries to serve the Perpetua-powered Lex, but Lex merely fries him. Young Lex asks older Lex what serving will cost him.

Lex Luthor travels to a strange, somewhat corporate Earth-45, and recruits what seems to be a Luthor-Doomsday hybrid called the Doomthor.

On Earth-32, a green Martian Superman (presumably) with a beard reflects on what Lex meant to him, and that he's been gifted a Kryptonian headband by him. (NOTE: The presumption is that he's being recruited, but it's unclear. He is talking to someone, but who is never revealed.).

An alternate Lex, in a bat-suit, talks to his butler Fred, who looks a lot like Superman, and drinks coffee, speaking of the difficulties of working in this near-future. Perpetua Luthor arrives, with the younger Lex. The Bat-Luthor sucker-kicks Lex, and starts defeating him, until his "partner," the martian Superman, encounters Doomthor, which distracts Bat-Lex. Luthor tries to turn Bat-Lex against Superman, and fails, because Bat-Lex has a partner and a friend. Perpetua Luthor leaves him.

On Earth-1, in the future, an older Clark talks about how the Black Mercy showed him Krypton, alive, and when he woke up, Luthor was smiling, and they were dead, so he "did something." The next scene is a comatose Luthor in a hospital, and Perpetua Lex mocking him for being allowed to be "made small." Perpetua Lex leaves, knowing something, and the comatose Luthor smiles (NOTE: What isn't explained.)

On Earth-50, Luthor stands before the wreckage of a statue of Luthor in the style of Lincoln. His younger self asks why "we" are doing this, and Luthor says that there is no we, only Luthor.

On Earth-44 they find a shoemaker Luthor, and Perpetua Lex kills him.

On Earth-13, a rambling Luthor in a more ancient version of his typical super-suit rants and raves until Perpetua Luthor kills him.

On Earth-47. Young Lex and Perpetua Luthor meet a bearded Lex who has created a garden the size of a forest to try and help humanity. He mocks Perpetua Lex and his mission, pointing out he's not unique, just evil, and that Superman is, for rising above. Perpetua Luthor vaporizes him, and gives Young Lex a suit and renders him bald.

It is revealed that the Young Lex is merely a DNA backup for Perpetua Lex.

Story - 2: There are things in this story that are certainly fun. The idea of multiple Lex Luthors makes for an interesting story, and there is a ton of genuine creativity on display here. Doomthor is unique. The idea of many and varied duplicate superheroes with competing motivations is almost as old as the genre itself.

Used sparingly, it can have a profound effect. But when it's used to create a random, somewhat fanservice-like effect, it becomes grating, an exercise in what looks cool over something with much actual substance.

That's the key problem with this story. It's an eight-page story padded out with COOL stuff, that, while cool, is not a story.

If the work had drilled down and actually gotten a little close to the point of emotional emphasis here, the child and his ultimate fate, the reveal at the end would have been more effective, and made more sense. As it is, there's no story justification for why a person who can read minds, and is as brilliant and powerful as this Perpetua Lex surely is, would need a DNA backup, or why convincing the child to like him has any bearing on Perpetua Luthor's mission.

Perhaps I miss the forest for the trees, and the whole story is a projected Black Mercy fiction of a child, and thusly its levity and bounce from COOL thing to COOL thing is supposed to be tonal, indicative of the child's voice. This could have been effective, but if that was the intention, it's not as clear here, sadly. I also get the impression that's not what's happening here. I could be wrong. Especially as it's implied, in the last story, that the visions of the Black Mercy are realities held back only by perception.

This is a solid concept, and an interesting hook, but the execution needed tightening, and a refinement of the use of the form.

There were also things where what was happening wasn't incredibly clear. The intro to the Martian Superman was not artful, so much as jarring, and the scene where Luthor is in the coma does the "trust the reader" thing, which is usually a good move, but that works best when what's happening is something a somewhat reasonable reader can get. In this case, I still have no idea why the Luthor that is comatose is smiling. if it's because he's faking it to trick Superman, it wouldn't fool Perpetua when he arrives (if he has Martain abilities), and if it's that Perpetua Luthor cured him, that's not clear either. It's muddy. It needs to be clear.

Art - 4: The art is very good at servicing the story in question, and there is a lot of good, unique interpretations of classic Luthor tropes here. The art's storytelling is solid, and the actual renditions are great. The reason it drops a point, for me, is because several of the backgrounds and settings are very clearly evocative of other pieces of existing movie settings. If the script called for this, all is forgiven, but if not, there is one scene with what seems a blatant lift from the Avengers tower, another with what seems to be the Hydra castle. Otherwise, though, the work is solid, and praiseworthy.

Cover Art - 3: There's nothing wrong with this cover (it's slightly red, but that's about it), but there's nothing really interesting here to drag you in. The idea of Lex killing a bunch of Lexes is interesting, but this cover doesn't really show us how. It's just a pile of dead bald guys. It doesn't hint at the unique uses of the story.