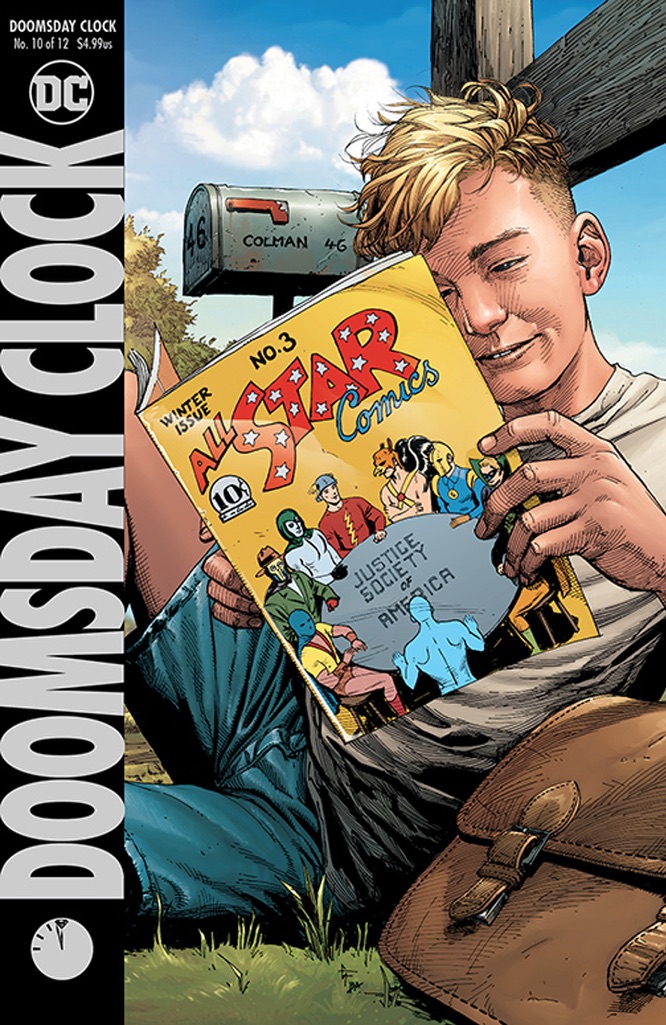 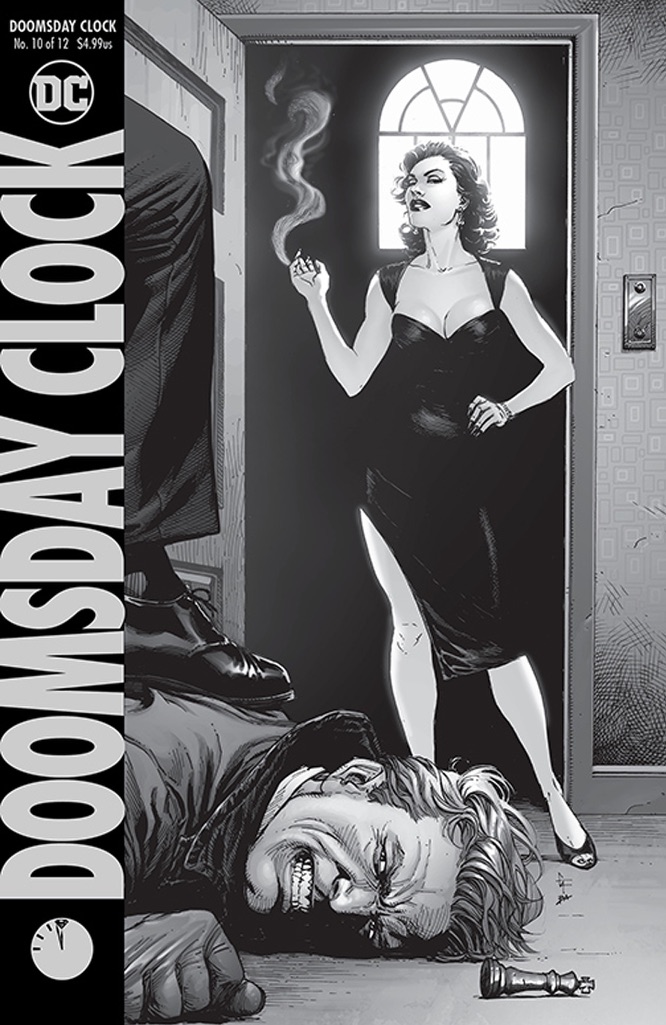 Reviewed by: Keith Samra
Click to enlarge
We open with a scene from a movie, as it is being filmed. The actor Carver Coleman, is struggling to get through the final scene, but insists that it must be filmed and finished on time.

We then see Carver Coleman's career as it starts as he moves to Hollywood, and then meets Dr Manhattan upon his arrival on our Earth. We see as Manhattan helps Carver Coleman through his career, helping him reach success like he so wanted.

We then see as Dr Manhattan discovers Superman, and follow him through the ages, through his different histories, origins and interpretations.

He also sees how Superman's appearance has inspired others with abilities to do the same, as we witness the birth of the JSA.

Manhattan then experiments with events on this new Earth, changing history, to see how it affects Superman, as he tries to understand his importance on and to this Earth.

Lastly, as we see the murder of Carver Coleman, we also witness Superman wake up.

"Every action has it's pleasures and price" - Socrates.

"I am a being of Inaction... On a collision course with a man of Action... To this universe of hope... I have become the villain".

Story - 5: This issue is most definitely an important one. I don't want to sell it short, but this is what we have waited for since the Rebirth Special. We learn when Dr Manhattan arrived here, and what he did throughout the time he resided here. And in true Geoff Johns fashion, he is able to do it in a way that encompasses many of the iterations that came before.

I know that many have hated the fact that this book has had many delays. And that the lateness has made them lose interest in the story. I however appreciate that the book is consistent in its quality, and also its creative team.

Instead of building up to it, I want to get into the most important aspect I felt this issue established, which was that the DCU Earth Prime that we call home is no longer part of the multiverse, but is now the Metaverse, to which the Multiverse reacts to. And at the centre of it is our hero Superman. Johns blew my mind, as he tethered the Metaverse so closely to Superman, making him once again the flagship character, and the literal pillar that the DCU was built and hangs on.

I couldn't have been happier, as I read one of the best writers of this generation, pay tribute to a character that started it all for not just DC, but all of comicdom.

So what does this mean going forward? If I were to guess, it would mean that the future of the DCU will always remain fluid, and subject to change for a new generation... Not that it hasn't been that way since 1986 with Crisis on Infinite Earths, however now we have one of the best explanations for it. I know that there is a contingent of people that will hate the fact that this needed to be explained, but it is a valuable tool that if used right, will allow DC to continue to update their universe as the years go on, for newer generations, just as the Crisis did decades ago.

I loved the way Dr Manhattan watched Superman over the years, through his different iterations, from the Golden Age to the Silver Age. Post Crisis to Birthright, and finally Secret Origin, even the New 52. One thing that was obvious was that Superman as a character always stayed the same. A force for good, a force for inspiration and as most importantly, a force of hope, This was eloquently told through Dr Manhattans narration, as he diligently tried to understand the importance of Superman, and what he means to the universe. And as I stated in the early issues of this series, I feel that Dr Manhattan may have had a hand in the death of the Kent's.

I also enjoyed as we saw Dr Manhattan tamper with history in the DCU, we already witnessed as he moved Alan Scott's power battery six inches from his reach, causing him to die in a train accident, rather than forming the JSA.

One scene that got me was when Wally saw Dr Manhattan, and told him that "they will stop you". This left Manhattan with the knowledge that in this universe, he can't get away with things, like he did in his own. It's clearly evident, that he is haunted by the event that is to come, as the last thing that he can see, is an angry Superman coming at him, as that will be the last thing that he ever sees.

Carver Coleman is a character that we meet at the start of the issue, and though his arc only lasts for this chapter only, we learn that he is the first person that Dr Manhattan was the first citizen of our Earth that he comes into contact with, and he uses his abilities to help in his life and career, but does nothing to help in saving his life. Carver Coleman was a good anchor for this issue, and a good tool for Johns to remind us what Dr Manhattan nature is.

Lastly, we ended last issue with all the heroes off world, and Black Adam attacking the UN with only Wonder Woman there to protect them. We witness Superman waking at the end of this issue, so I can't wait to see what will go down then, in the present day. Also we need to remember that Batman was a key played in this series also, and he also is on Earth, along with Ozymandias and Rorschach.

We will be entering the final two issues of this series, so I suspect there will be loads of action and surprises to come.

Art - 5: The art has always been an important aspect of this series, and this issue was no exception to that rule. As per the previous nine issues, Gary Frank managed to outdo himself again this issue, as he rendered Dr Manhattan's exploits on our Earth. What I loved the most was being able to see him take on characters in different eras, and make them feel like we were looking at them in that periods style, all the while keeping it all in his unique style.

As I mentioned a few months back, I love the way Frank handles Dr Manhattan, and the fact that he is essentially naked blue man. That said, Frank never draws attention to this fact, and simply handles him the best way he can, by drawing the eye to the bigger picture.

Much like the original Watchmen series, Frank has managed to keep the nine panel grid per page, only deviating from it from time to time. And as I mentioned in the past, it gives it the storyboard look, which adds to the cinematic feel to the storytelling.

The highlight for me was seeing Superman in the different eras of his history, from the Golden Age (and a wonderful and subtle call back to the cover of Action Comics #1), to my favourite iteration, the Post Crisis Superman. We got to revisit Man of Steel #1, as we saw Pa show Clark the birthing matrix ship, and then when they were creating the Superman suit.

It was not just that, it was also seeing the Silver Age, and Birthright, as well as Gary Frank's own, Secret Origin. I just loved seeing all these different eras of the man of steel. The different death scenes of pa were also quite touching. And though I don't agree with the theory that Pa Kent must always die, it was a scene that had an impact.

Along with Superman, I loved as we also got to see the JSA, and having them be missing from the pages of DC for quite some time, it was great to see them in print once again.

Carver Coleman through the years was another great example of how good Frank is at during people in different ages and stages of their lives.

It's not easy rendering a linear story about a character that jumps through time like Manhattan does, I have to take my hat off to Gary Frank. I've loved his work throughout this series, and without reading the words, his art is enough to help you understand what is happening in the story.

Brad Anderson's colors were as beautiful as usual, helping with the tone and feel of this book. He has been an underappreciated member of the creative team I feel, and I want to acknowledge his efforts and give him his dues.

Cover Art - 5: This cover is very interesting for sure, as it literally depicts the first scene from this book, but it doesn't actually depict the importance of what this issue holds. However, the noir look of a scene from a DCU black and white movie is however an interesting choice, beautifully rendered by Gary Frank with Brad Anderson's monochrome tones.