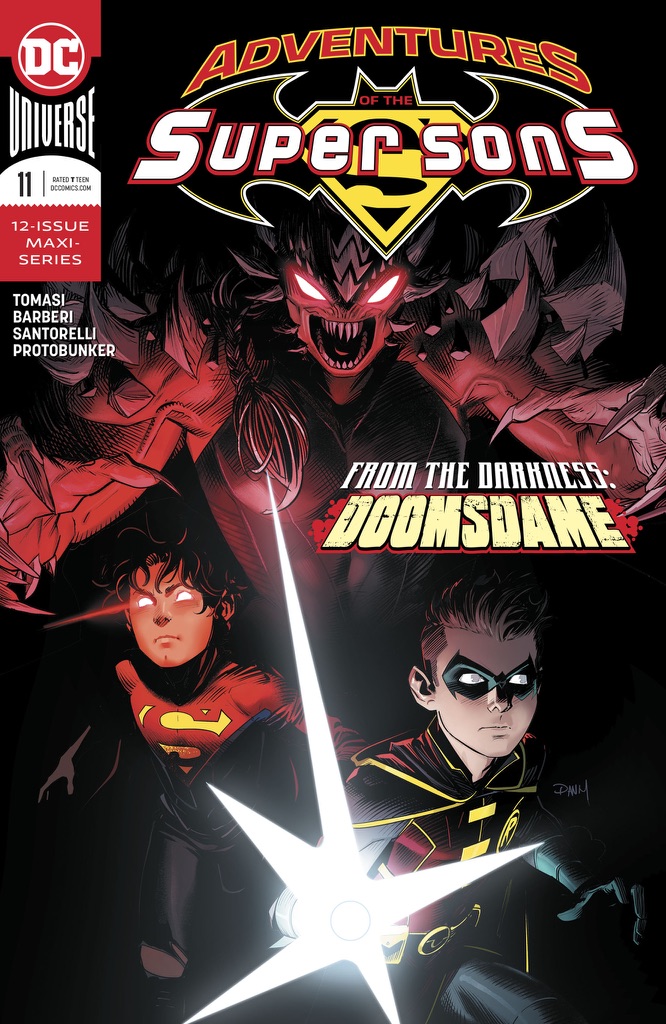 Adventures of the Super Sons #11

Carrying on from last issue, we catch the boys standing firm against Rex Luthor's Injustice Gang, with a few allies of their own.

As the battle ensues, the good guys gain the advantage in the fight, and it's not long, until an almost defeated Rex makes his final play. He flies up to the stargate above, with the boys hot on his heels. They thank their allies, and head through the stargate also, completely ignoring the collective "Noooooo" from their friends down below.

We end with the boys trapped in a Phantom Zone like cube, in Rex's hands, as he gloats over his victory, and as they head into the end game of his plans.

"Wanna know what my plan was?... I'll tell you... It has something to do with what Rex means on your planet... KING" - Rex Luthor.

Story - 5: What a great way to start wrapping up a yearlong storyline. This is what was great about comics in the past, just grand epic-ness! Tomasi has long been a favorite writer of mine, and this issue as well as the previous ten have been the best example of the great range he has as a writer. Comedy, action, drama and suspense all in one (and all in this issue as well). I loved that he brought back the unadulterated fun feeling to this book.

I loved how the boys acknowledge that they have been gone for quite some time, and that what they had planned for summer vacation, may have all been for naught, as they have been space hopping for months now. Though Jon does declare that the "Summer of Super" still happened, but not the way he had planned, which was a nice call back to the first issue.

I love that the boys have such a brotherly love, and partners in crime fighting relationship, as they continue to fight alongside one another, and think back to past times. In this case, the time Superman and Batman took them to see Butch Cassidy and the Sundance Kid. It's little moments like these, that make you gain a personal connection with these fictional characters, and await their next adventure a month from now. Sadly, after next month, we will be bidding farewell to this title, as it comes to an end. Which is very sad, as no one in their respective "parent" books is doing much with them at all. Bendis has done some trippy time travel nonsense with Jon, and I can't even tell you when the last time I read anything with Damien in it, that made an impact. As for Tomasi, I really hope he moves on to a title that will project his vast talent as a writer. I would love for him to take over Young Justice, and make that book fun again.

Well, next month is the final issue, and we will see what Rex has had planned this whole time. He has declared himself King at the end of this issue, so we shall see what King Luthor has up his sleeves, and see how the boys will overcome this trial, and be the World's Finest that they are.

Art - 5: Carlo Barberi has done with this book, what Ryan Ottley did over at Image with Invincible. He came in after a well-established artist exited, and made the title his own. He respectfully took on the characters that Jorge Jimenez so lovingly rendered, and took them further to where they needed to go. It's hard to imagine the boys without his wonderful pencils.

We got a special treat this month, with the wonderful splash pages featuring the battle between Rex's army and the boys and their team. I loved seeing the older versions of the boys again, and watching them in action.

Like Neal Adams, Barberi takes liberties with Damian's cape, making it as long as it needs to be to look cool in the shot. And the way he drew Jon's battle torn uniform, with barely a cape left attached to it. And as we have seen throughout this past year, I love the weird and wacky younger versions of Earth's Super-Villains. Doomsday, Bane and Chemo really stood out. Clearly Barberi had a lot of fun drawing this issue.

Matt Santorelli's inks looked crisp and sharp. A great combo with him and Barberi as an art team, I do really hope that they get another awesome project at DC that's just as fun as this has been.

Protobunker's colors bring life every panel on every page. Even in the limbo pages with the negative spaces, the boys looked so stark and colorful against the white background. They popped as you'd expect, but more so that they were handled with such vibrancy.

Cover Art - 5: Love the cover by Dan Mora, his work on the series covers has been absolutely fantastic. Though this cover is a little misleading in terms of the story inside, it would compel me to pick up and flick through the issue in the very least.