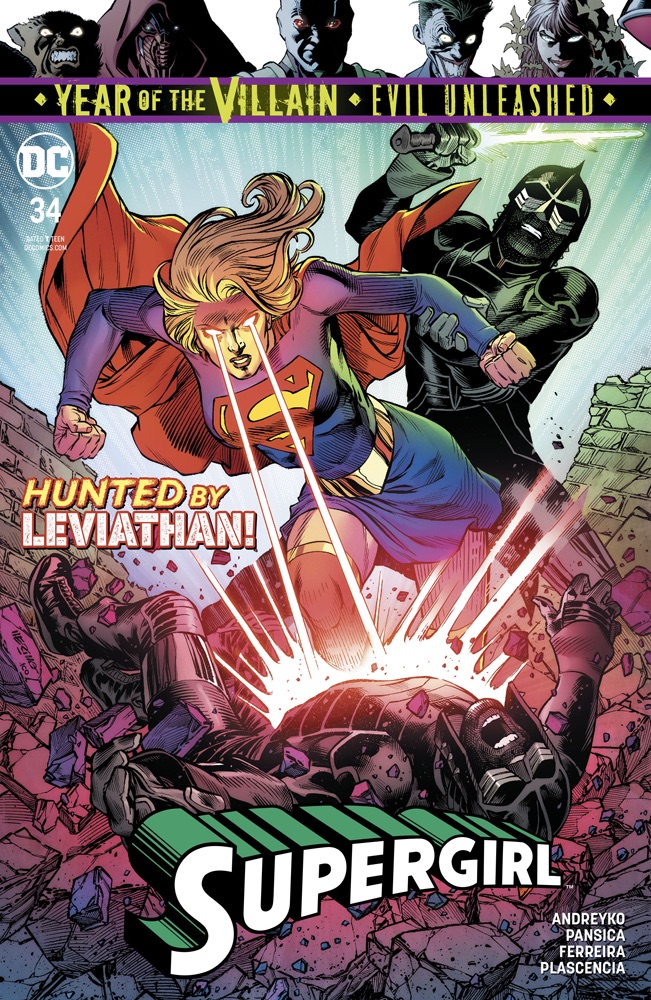 Reviewed by: Adam Dechanel
Click to enlarge
Supergirl has discovered the note from her mother with the single phrase 'LEVIATHAN' in the remains of the Danvers family home. Her foster parents Jeremiah and Eliza are missing presumed dead.

As Supergirl and Krypto soar through the skies, Ben Rubel sees her from the crowds and solemnly notices a missing persons poster of Kara Danvers.

Supergirl arrives at the new government site of 'The Block' and questions Dr. Shay Veritas about her parent. Shay reveals Eliza has a tracking chip and it has stopped in a Pennsylvania Medical Examiners Office so the girl of steel heads there to find answers.Once there, Kara discovers a body bag with a corpse and a metallic hand that had housed the tracking chip.

Kara has little time to investigate or mourn as a horde of Leviathan soldiers arrive to attack her. Armed with Kryptonite weapons.

A mysterious stranger in decommissioned DEO armor comes to the rescue of Krypto and Kara and when they unmask Kara is in for the shock of her life.

Elsewhere Brainiac 1.0 is given access to the Fortress of Solitude by a dark gift awarded by Lex Luthor. When Brainiac hacks into the Fortress console, the android discovers a full repository of Kryptonian knowledge!

Story - 5: Supergirl jumps straight into the Leviathan mystery and mourning the loss of her Earth parents. Since she's been in outer space for almost a year Leviathan has been allowed to thrive and due to the Danvers' links to the DEO they were amongst the first to fall.

Page 13 broke me. I know Supergirl isn't inherently suspicious and after the Unity Saga probably has had her fill of mysteries but given who her rescuer is I'm not sure if the body in the Medical Examiners is actually her mother.

I liked the missing persons poster and the appearance of Ben Rubel as it acknowledges that the rebirth storylines by Steve Orlando actually happened. Also knowing this, perhaps Zod's New Krypton will be home to the Argonians?

One thing that is clear from the story is how alone Kara is. She may have her rescuer and Krypto but other than that she really has no confidantes or locations in National City. I hope this issue will signal a change and that the announcement over the weekend doesn't mean a downturn in the quality we've grown accustomed to.

Art - 5: Supergirl's art has been very stylized since Rebirth. Instantly recognizable at the turn of a page and Pansica's art is no different. It has a more detailed edge to it with more lines and shading depth. The page compositions are beautiful and really help to enforce the emotion in the script. I think the scene with Kara soaring across National City is my favorite but the discovery of her mother's body will stay with me because it was so skillfully rendered.

The designs for the Leviathan soldiers came across as fetish more than menacing and the Kryptonite lightsabers were very cringeworthy but that is not down to Pansica so I can't mark him down for working with what was enforced because I doubt these would be his design choice.

Cover Art - 3: A cool action scene but as a cover it felt a little 'by the numbers'.

There is nothing wrong with it other than it just felt like a panel in the book had been enlarged to fit the cover. I was just hoping for something a little more dynamic though this still showed how powerful a force the Maid of Might really is.

Variant Cover Art - 5: Something Kara does a lot more than Clark is smile.

That isn't a negative for Superman, but he rarely has occasion to enjoy life, especially now.

The carefree vibe of Supergirl and the absolute joy in Krypto's face says it all.

So much fun and innocence, something I think the book should exploit more.