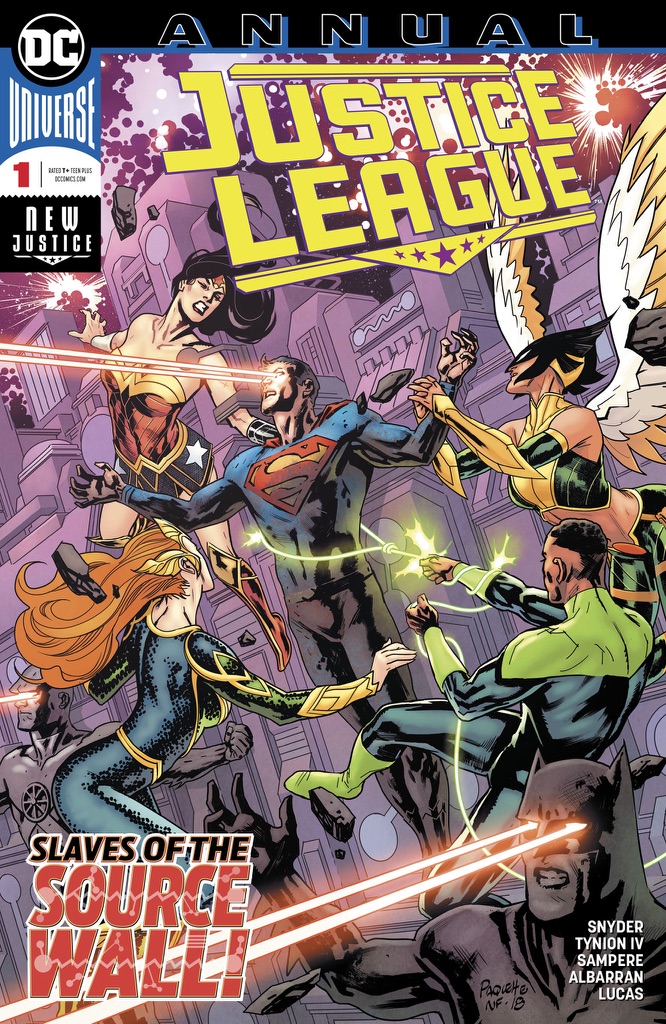 Reviewed by: James Lantz
Click to enlarge
The Justice League has arrived at the Source Wall. Will Payton, better known as Starman, is about to awaken the Omega Titans with their help to repair the Source Wall. Assisting them are the Green Lantern Corps and the New Gods. Hawkgirl's wings, in addition to being a map, can also aid Starman in channeling the energies of a deceased titan. Yet, what happens to Kendra afterwards is anyone's guess. She could cease to exist, or the entire multiverse could perish.

J'onn J'onzz has shown Kendra a psychic haven he's created for her in the event she doesn't survive the restructuring of the Source Wall, she kisses him, but the tender moment is interrupted. Brainiac is attacking. He wants to control Starman to channel the remaining energies the Legion of Doom needs to free Perpetua. The Justice League fights on, with Superman making a direct assault on Brainiac's ship. Yet, it may not be enough as the Coluan may have further plans for any eventuality.

Hawkgirl is about to seal the Source Wall when Brainiac takes control of Starman. With his senses overwhelmed, his powers are deactivated. Now, Perpetua is free, and the Legion of Doom has her in stasis. The multiverse is facing dark times and annihilation with every hero needed to defend it. Lex Luthor is preparing for war, and even the Justice League and their allies may not be able to stop it. They face punishment for their accidental hand in Perpetua's escape.

Story - 5: I'm not sure if this should be an Annual. It could have worked just as well as two or three issues of the main book. Still, Scott Snyder and James Tynion IV continue to give readers one of the best comics DC is publishing right now. Even if there aren't as many character moments in this, there really doesn't need to be. Too many would take away from the cataclysm of Perpetua's escape from the Source Wall. I'm seriously impatient to see where the main series will go from here. Perhaps we'll see a "Trial of the Justice League" story arc in the future. I, for one, will be looking forward to every issue to see.

Art - 4: Some images look a bit off. Plus, there is a slight overuse of double page spreads. I like those if they're used for dramatic effect. David Finch did well in that respect. Daniel Sampere is a fine artist in his own right, and he did well with this Annual. I just felt he could have done one or two fewer double page spreads.

Cover Art - 4: Beautifully drawn, if a bit rushed. But how the heck can Batman fire lasers from his eyes? Did I miss something?