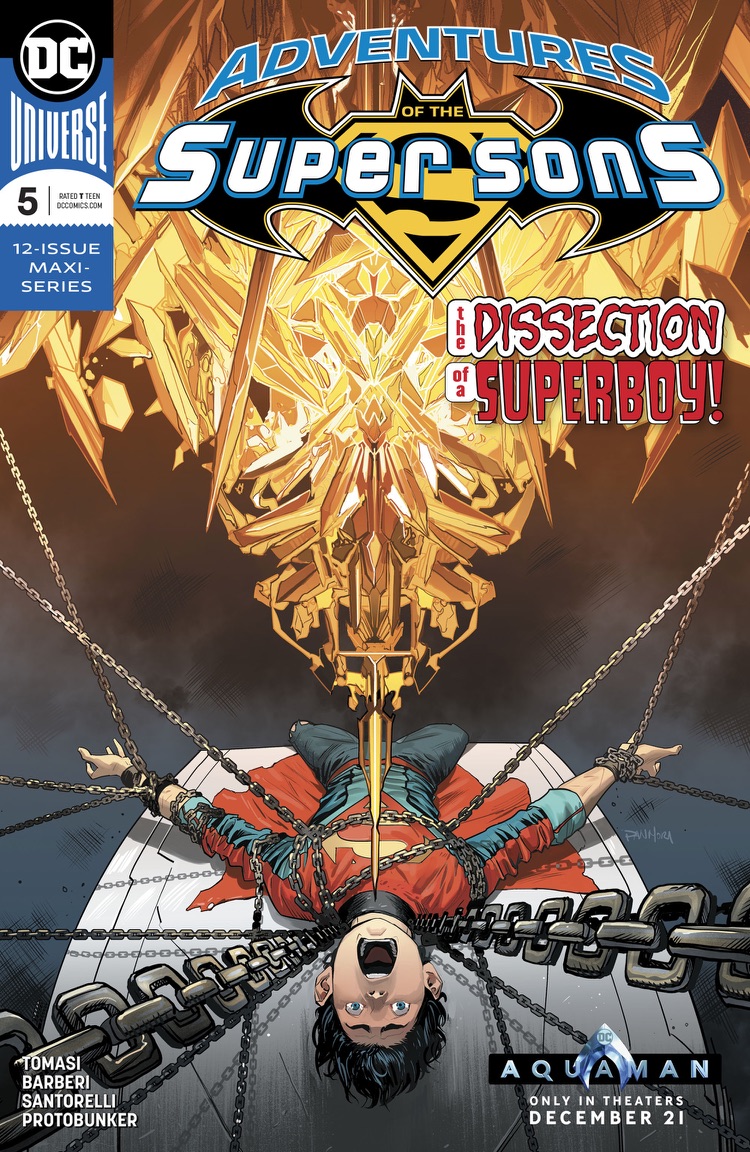 Adventures of the Super Sons #5

Scheduled to arrive in stores: December 5, 2018

The boys team up with their older doppelgangers, to foil a plot by to alien brothers, as they attempt to escape the haunted house and planet.

This issue was a nice break from the on-going narrative about the Gang and the boys' adventures in space.

My first thought was that it bore similar a theme to the classic Alan Moore story "For The Man Who Has Everything". Both Jon and Damien seem to have dreamed up ideal futures for themselves, as heroes and parents. What I loved most was that Damien has stepped out of his father's legacy, and now taken the mantle of Robin to new heights, one that even Dick Grayson didn't reach. And also I loved that Tomasi brought back Damien's "other" name of Ibn al Xu'ffasch from Kingdom Come. I have many a time argued this point with my younger cousin, who is a huge Damien Wayne fan, that he first appeared in the story Kingdom Come, and he was much different, but had a more culturally appropriate name, so I was glad that Tomasi added that little detail in there.

Though this story was a nice and mostly enjoyable little tangent from the main storyline, the plot did get a little weird in places, and didn't hold to the usual calibre of Tomasi's writing on this book. However he did write it really well, and I just couldn't mark it down a grade, due to my own lack of understanding.

I enjoyed this chapter for its silver-age inspired, wild and wackiness, and as usual look forward to the next issue. This is still the best all ages book on the shelves.

Carlo Barberi continues to amaze with his crisp line art, and his distinct style which is a perfect marriage between story and art.

I really loved that Barberi managed to amalgamate Superman's "reborn" belt, into an evolved version of his own "suit". Whilst doing the same with Damien's future look from a few years back, in keeping with the traditional Robin colours. Also, not since Tom Grummett designed the 90s Superboy, has an artist come close to distinguishing a look between the same character, young and old. Barberi's older Jon, carries a lot of the traits of his normal 10 year old self, from the excited smile, to the confused curiosity.

The pages into the void did a lot, using the negative spaces, as well as the blank word balloons. Really gave the empty space feel.

Finally pages 13-14, which parallel the events of both Jon and Damien learning from their older selves was absolutely perfect, keeping the symmetry of the storytelling between the current younger and older versions of our heroes.

Protobunker's colours are as exceptional as usual, I can't say enough about his palette, and the highlights he uses to bring life to the page.

Dan Mora's covers continue to impress and excite, I love the layout of this cover. I would most definitely pick this issue up had I not been following it, by the cover alone.