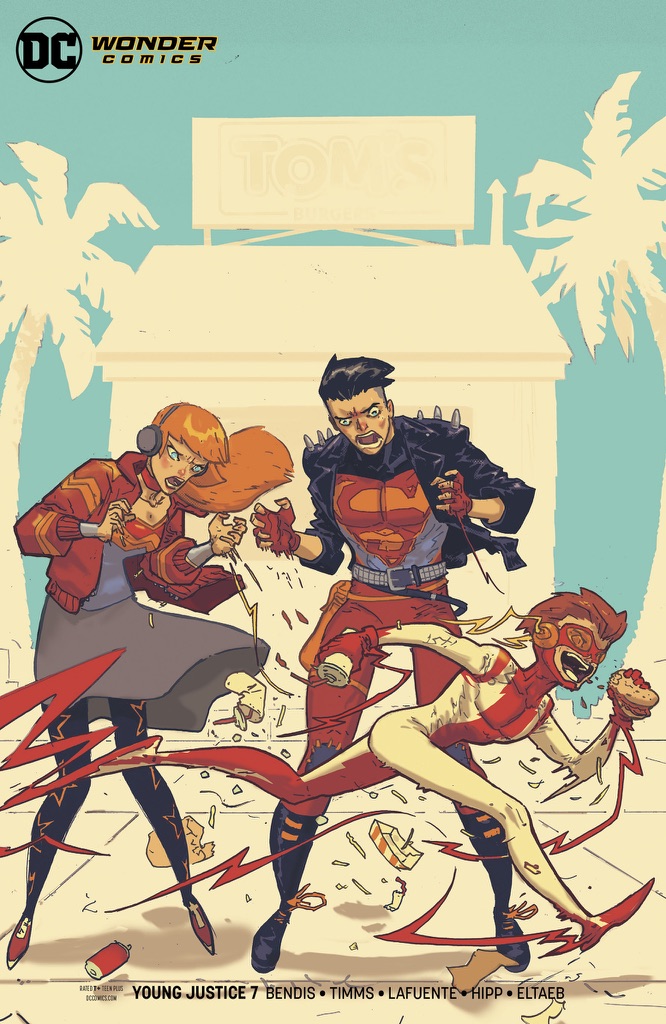 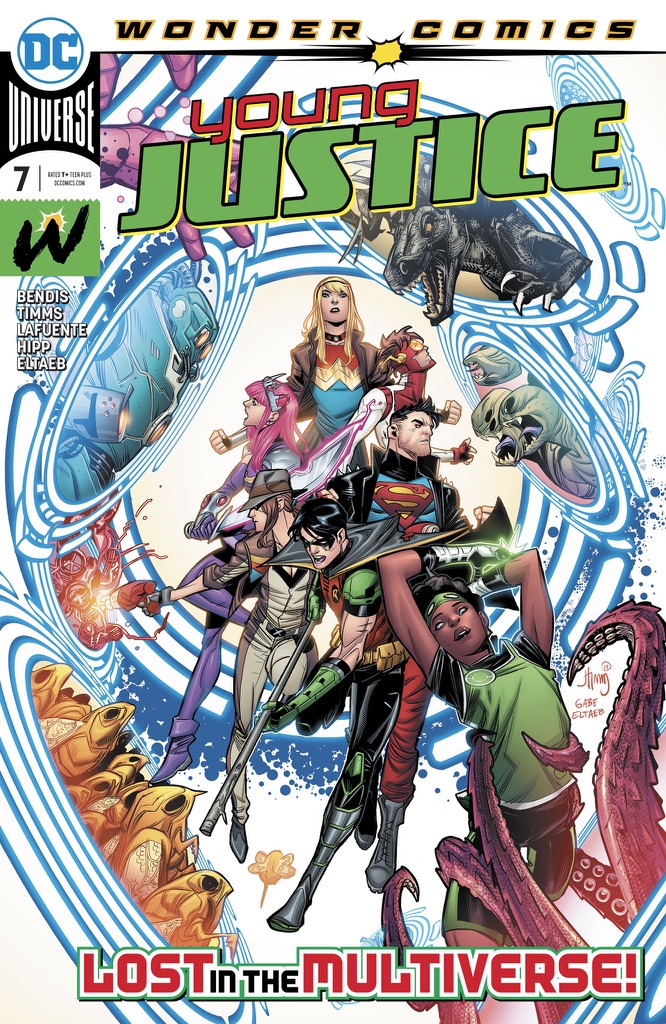 Reviewed by: Keith Samra
Click to enlarge
The team bounces to a couple different Earths, while trying to get home from Gem World. They find themselves on an Earth that has a much older and more violent Justice League than back home.

With help from that Earth's Dr Fate, they think that they're being sent home, but end up somewhere worse.

Story - 4: This was a good little follow up from last issue, and also a good start to the next arc. It ticked many of the right boxes for a Young Justice comic. The only thing that bugged me was the pacing at which way the story was unfolding, which clearly is the way Bendis intended it to be, so it's most likely my issues with Bendis' style of writing.

The opening was cute, as the Young Justice team drops into a less than serious version of the DCU, and Bart's obsession with the way the Justice League looks. Captain Carrot and his Zoo Crew Earth was also a nice destination we got to visit. It shows Bendis' wide knowledge of the DCU for one, and also his attempt at a more light hearted tone to a series.

The real meat and potatoes is found on the Earth similar to the Kingdom Come world, where the Young Justice team discover the older and more stately Superman was responsible for the murder of Shazam/Captain Marvel, rather than the battle in which he sacrificed himself to try and save a majority of the Superhero community.

I'm glad that Bendis chose to deviate from the classic narrative of that particular world, as trying to make it fit into the Kingdom Come narrative would have been hard and a little insulting to the original story.

It feels like Bendis is still trying too hard at comedy at times, as the jokes seem a little forced, however most do hit the mark. I'm looking forward to the next issue, I really want to know what Earth the team has landed in this time, seeing as how Dr Fate describes it as the worst Earth of them all.

Art - 4: The art was actually really good in this issue, I really enjoyed what John Timms bought to the table. His line style is crisp, and he has a good handle on perspective. Every character has his or her own unique look, and body language. Timms is quite a well-rounded artist to say the least. But the real magic happened when Superman and the Justice League turned up (Kingdom Come version). Timms managed to bring in the look and feel of the characters from that story, which is no easy task. Seeing as how they are based on Alex Ross' painted style.

The action was quite exciting, as I said, Timms has a great handle on perspective, and also is very good at showing emotion on the characters' faces, which is really evident with Wonder Woman and Wonder Girl. I'm also liking Timms' Superboy a lot, he just needs to work on that fade haircut a bit.

Cover Art - 3: Timms' cover is adequate, it's nothing fantastic. The composition is solid, but it just isn't exciting enough.

Variant Cover Art - 3: Riley Rossmo's cover is funny, but the faces on the characters are a little more than off putting, they look very constipated.