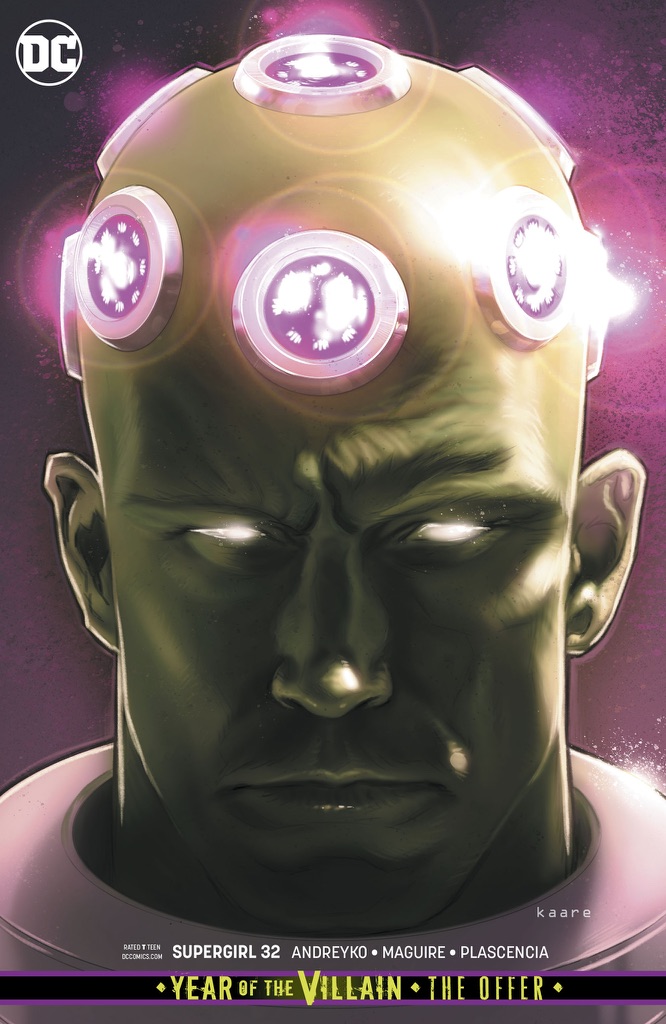 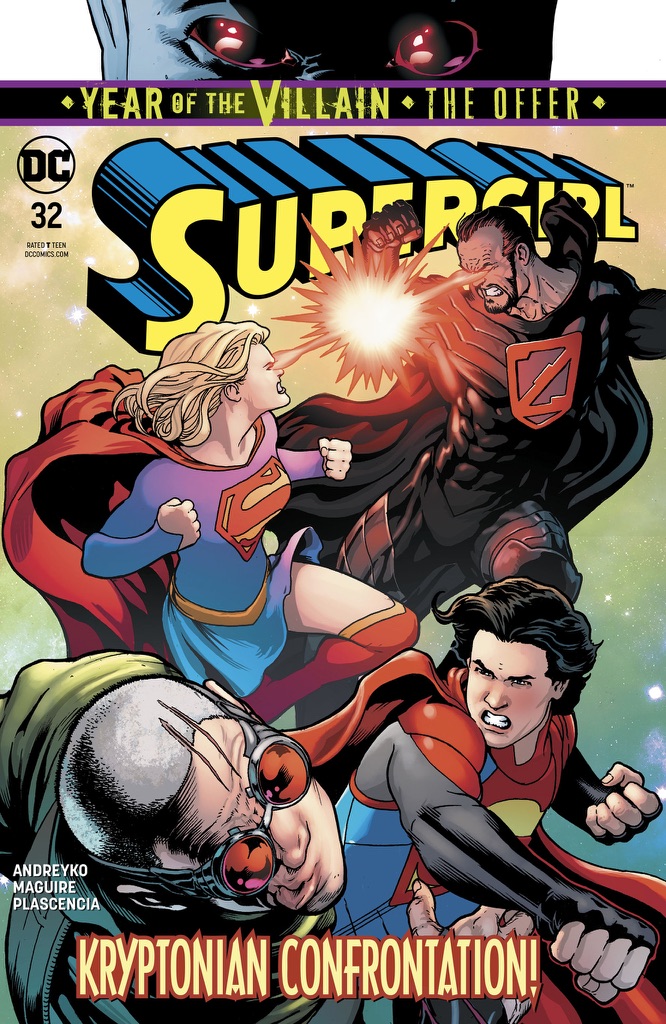 Reviewed by: Adam Dechanel
Click to enlarge
Kara, Krypto and Jon arrive on the Trilium home world and seek out Empress Gandelo. A little creature at her side ejects spores that rapidly grow into an army of slimy protectors. Jon and Krypto proceed to squash them one by one while Kara attacks Gandelo. The crystalline villain transforms into a winged harpy and reveals that The Circle ensured the galaxy thrived due to Krypton's destruction. She also reveals that they were responsible for killing Zaar's entire race too.

Almost on cue Zaar appears and upon hearing the revelation aims to kill the villain. Kara is adamant she is not going to relinquish Zaar's axe and as Zaar rips Gandelo's wings off he then turns his rage on Supergirl.

Z'ndr in Kara's ship soars into the fight and offers to fight by Kara's side but the two heroes are horrified to see Zaar murder Gandelo.

As Jon and Krypto arrive Kara instructs Jon to activate his teleporter and they all escape Zaar's bloodlust and appear back on Jor-El's ship.

They may live to fight another day but in the confusion Zaar was able to reclaim his axe and that means trouble is on its way.

Elsewhere a drone of Lex Luthor's tracks Brainiac-1 to his hiding place in Metropolis. A hologram of Luthor appears and makes the scavenger an offer he cannot refuse.

Story - 4: Gandelo's end is a satisfying one and her revelations about The Circle, Krypton and Zaar are much needed to help the Superman storyline move along. Bizarre that this title is doing ALL the leg work for Superman but I'll be damned if this doesn't make Andreyko's title a hell of a fun read.

I loved Z'ndr's sudden appearance, meaning we haven't seen the last of him. I also thought Zaar's first ever foray into character development was great. I can't wait for him to take revenge on The Circle instead of being a Doomsday proxy.

My only gripe this issue is that it's essentially an extension and expansion of the Superman title at the moment, now that her investigation is over. I hope she gets some time for herself and her own story again soon.

Art - 5: Kevin Maguire does a brilliant job of putting an end to Empress Gandelo. I love his renditions of the Els. That first page with them all sporting the same shield and the flowing capes... just breathtaking. I wish Kara had a bit more of a chance to fight in Maguire's layouts but I love this style so I hope we see more of it regardless.

Cover Art - 4: Just like the cover of Superman #13 we get a beautifully illustrated cover but it doesn't match the interior. It's a fight I'd love to see as Zod never really fights Kara, ever. And Jon breaking Jax-Ur's jaw looks epic. But is this a spoiler or printed in error schedule-wise? I'd hate to be a consumer purchasing this book hoping to see this fight and not getting it (or even a hint of it).

Variant Cover Art - 4: Great art. Strange choice for a variant especially due to the tenuous link from a two page tie-in to the next story after The Unity Saga. Brainiac looks suitably menacing and I look forward to him appearing. Does this mean he'll be a foil of Supergirl's moving forward? That would be pretty cool. Andrews' art process to create this cover has me intrigued. I would love to find out more about the creative process for it.