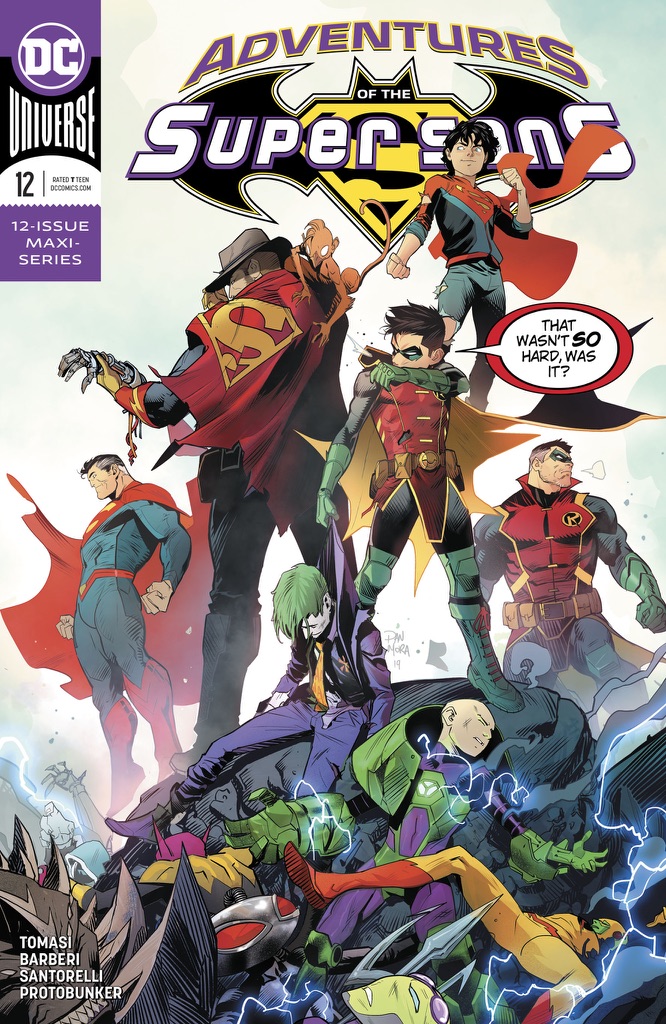 We Open with Rex declaring himself king, as he has finally defeated the Super Sons, by banishing them into the cube.

The boys figure out a way out of the cube, with the help of the cube itself, which has gained sentience and a form. Cube, as he is now called, tells the boys of his existence, and how he came to be, and how he was the one that created Rex Luthor and the rest of the Gang/Injustice Army, by studying the villains of Earth, from the Fortress of Solitude, right before he was liberated by Rex himself.

Cube helps the boys escape their prison, and they take down Rex and the Gang. The boys finally get to return home to Earth, just in time for the first day of school, with Alfred making an appearance, and assuring that he knew the boys would have been fine the whole time they were away.

Story - 5: The only down side to this book is that it marks the end of this maxi-series. Tomasi did a wonderful job of keeping alive the joy that you can still experience with comics. I stated once before that after Grant Morrison and Dan Jurgens, Tomasi was the guy that nurtured both Jon and Damian, and that was evident right up to the very last page of this series.

This issue served as a wonderful wrap up to the series, and tied up all the loose ends, as well as revealing the true origin of Rex Luthor and his Gang/Injustice Army.

I loved how the book wrapped up, in a very "How I Met Your Mother" kind of way, with the kids wanting to hear more stories featuring the Adventures of the Super Sons. Also liked that Jon and Damian get back just in time for the first day of school. DC really needs to keep the best friend relationship between these two characters going, as it really helped grow the boys as characters, and had them come into their own.

One thing that I never really mentioned was the dialogue in this series. Tomasi wrote the characters in a realistic way, that didn't feel like he was trying too hard to mimic conversations in the real world, which really added to the enjoyment of the series as a whole.

I'm quite bummed that we bid farewell to this title. I just hope that we get to see another series like this featuring the boys, hopefully with Tomasi as the writer.

Art - 5: I can't praise enough what Carlo Barberi has done with this book. He took over from the last series, and really made it his own since then. Though Jorge Jimenez was no slouch either, Barberi made his mark on both Jon and Damian's adventures in the most welcome way. He kept the light hearted feel, and ramped up the action with enough high octane energy, that it kept you well engaged.

Page two was my absolute favorite, four panels, a white negative background, and Jon and Damian just figuring out what to do next, and putting it into action. The art just flowed so well, that the characters seemed almost animated.

I liked Barberi's design of the Cube character, and the flashbacks we saw of his interactions in the past as a weapon, with the Manhunters, Jonah Hex and even Manchester Black.

I hope that we find Barberi's work again in the pages of a DC book in the near future, maybe in the Wonder Comics imprint line. Again it's a shame that this title has now come to an end.

Matt Santorelli's inks have been crisp and sharp throughout this partnership with Barberi. He has extenuated the best parts of Barberi's style, and given the visuals the prepared feel that worked great in conjunction with the color art as well.

A great combo with him and Barberi as an art team, I do really hope that they get another awesome project at DC that's just as fun as this has been.

Protobunker's colors have been the common thread that kept the tone and feel to the series, anytime we did have a guest artist. This is computer coloring at its best.

Cover Art - 5: This cover by Dan Mora is another of the best parts of the book. His covers have all been great, however this one just has a plain ol' Bad @$$ feeling to it. I want to desperately see interior work from him in the near future.