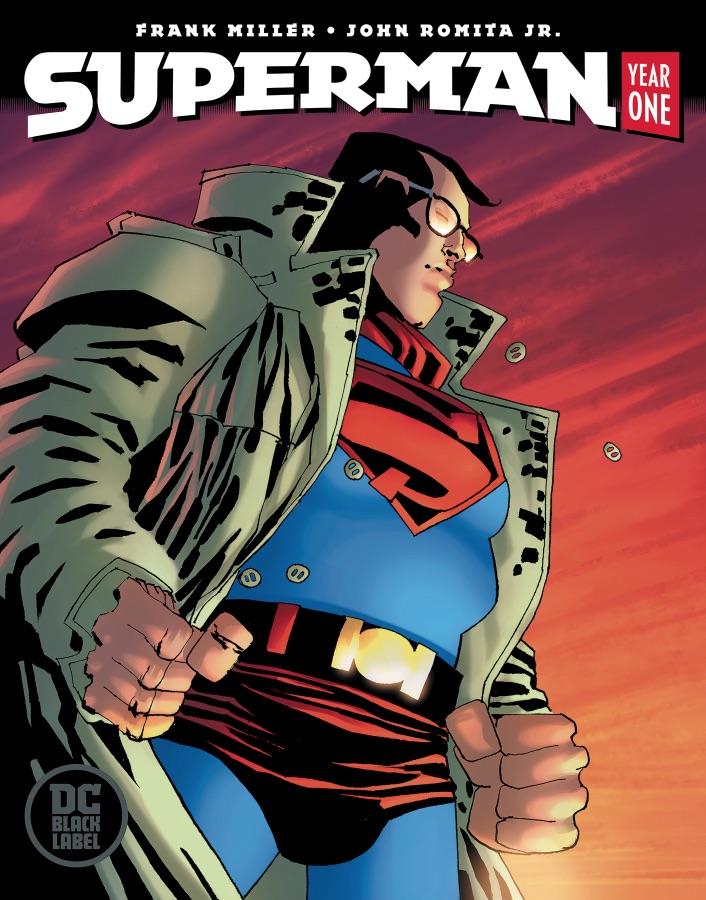 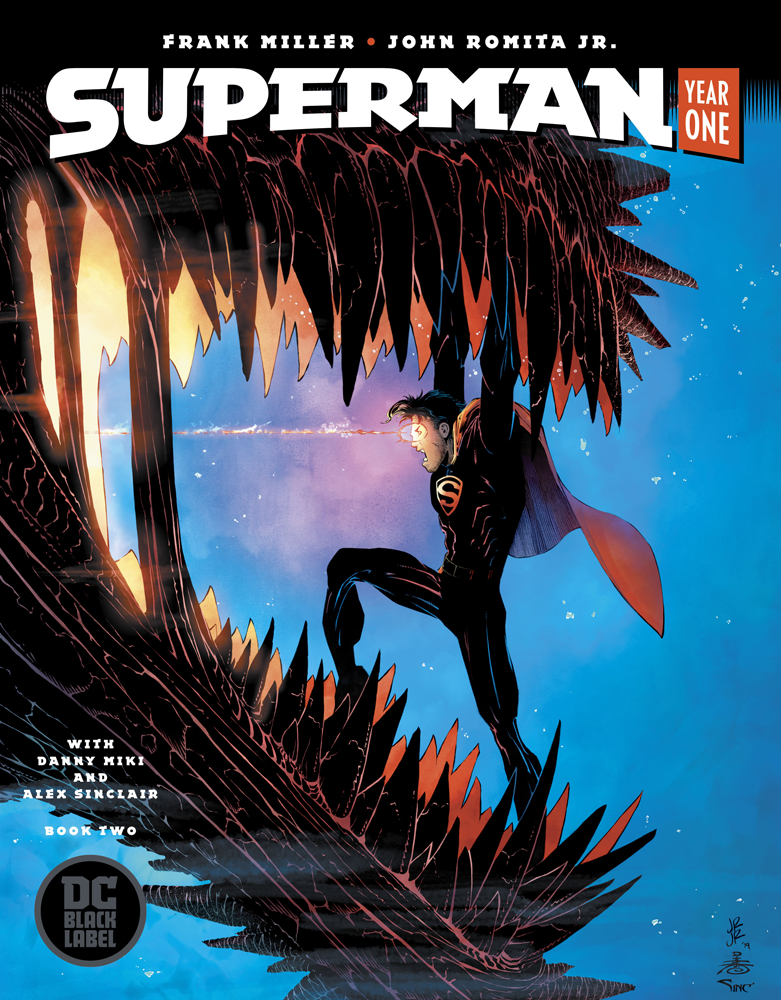 Reviewed by: Keith Samra
Click to enlarge
We begin with Clark's arrival at the naval base, as he gets ready for basic training and goes through his new daily routine of fitness and combat training, while bonding with his peers. He catches the eye of one of his superiors, who recruits him into an elite unit.

Clark manages to learn that the sea has a lot more to offer, as he discovers the songs of the mythic mermaids, and sees them with his own eyes. Later Clark gets put on disciplinary, as he gets involved in a bar fight, even though he avoids the fight at all costs. At night he slips away to find the mermaids, and discovers Atlantis.

During a special mission, Clark refuses to kill a pirate that he and his unit are sent to take out. This gets him a dishonorable discharge from the navy. Clark leaves for Atlantis, where he meets up with his new love, Lori Lemaris. Lori's father King Poseidon takes a harsh dislike to Clark, as a surface dweller, and unleashes the Kraken on him. After much punishment during battle, it's revealed that Clark is too strong to kill for the fabled creature, and he is granted residency in the underwater kingdom.

Story - 4: I found myself enjoying this issue a lot more than the last, mainly because there were slightly less Miller-isms, and also this is a story that has never really been told before, having a young Clark join the Navy, to fight for his country. A different sort of patriotic story in a way, still keeping in line with Superman being a true blue American hero, but this story so far tells of a young man, an immigrant that has decided to give back to the country that took him in, and adopted him as her own. Thinking about it this way, I feel Miller has done a wonderful job of adding a service record to a young Clark Kent on his road to becoming Superman. Adding an extra layer to him, which helps make him a little more richer in character.

Miller described Clark as having a craving for fun, in regards to his training and mission, but then clearly steers us the reader in the direction that Clark craves action, and not the subsequent killing that comes with being a soldier, as we see in the scene where he refuses to kill the pirate, and saves him and the others from the grenade. Even though it earns him a dishonorable discharge, Miller shows us that Clark still holds himself to a code, in not having taken a life, even while on duty. We even see Clark walk with his head held high as he leaves the Naval Base after his discharge. It actually reminded me of Doomsday Clock #10, where Dr Manhattan states that "Superman is a man of action," which Miller portrayed rather well in this issue. So the burning question of, does Frank Miller understand Superman?... I believe he has a rather good understanding of who Superman is. However we still have one more issue to go, so we have to see if he can stick the landing so to speak.

This issue we also see another of Superman's love interests, in the form of Lori Lemaris. Though here she is quite a bit different to how we have seen her portrayed in the past, Miller clearly establishes her in Clark's life as "the girl you fall for once you leave home". Clark and Lori share a unique relationship, and in the past, I always thought of it as Silver Age silliness. Here Miller treated it with importance, as she played a key role this issue. Lori is also the one that names Clark 'Superman' for the first time in this continuity. As well as maybe Clark's... first... Let's leave it at that.

One thing that I didn't quite like was that Clark can breathe underwater. This quite frankly is a power addition that isn't really needed in Superman's arsenal, and really only served as a device to serve Miller's story of Clark deciding to live in Atlantis at the end of the issue.

Another aspect that didn't work for me was the crazy interpretation of Poseidon, who is now Lori's father, claiming Lori not only as his daughter, but his love and bride... Miller-ism or just derailment, you decide.

At least Clark does somewhat manage to keep his identity secret somewhat, as Miller decided to go against the current trend of everyone knowing that Clark has powers. I thought for sure that everyone was going to know who Clark really was, after the establishing shot of Clark getting his hair shaved, which kind of threw me for a bit, as to how any normal clippers would be able to cut his hair like that. Other than Kurtzberg, who suspects Clark is more than he lets on to be, he manages to hide his abilities, while still using enough power to complete his tasks. It kind of reminded me of Byrne's "Man of Steel".

Lastly, one question or statement I always read in regards to the many retellings of Superman's origin is, "Why?", and "Do we really need another one?" My thought on this is basically, it's a reinterpretation of a modern legend from some of the industry's top storytellers. From "Man of Steel," "Birthright," "Secret origin," "New 52," "Earth One," "American Alien" to this, we have always gotten something new from every retelling. Some are not as good as others I'll admit, but all are retelling a modern mythology with a new and sometimes fresh twist. And in regards to this one, we still have one more issue to go, but I feel that Miller is bringing something new and different to the story.

Art - 4: Having read all the comments from the first book's review, I see that many of you severely disagreed with me and my opinion and rating of Romita Jnr's art. Which is absolutely fine, everyone is entitled to their own opinions, and I welcome the feedback. However, I stand by my statement, that Romita Jnr is a good artist, and just because you don't like his style, doesn't mean he can't draw. The man is an industry veteran, with a decade's long career, and NO, he simply does not get work because of who his father is.

This issue saw some better and more polished art from Romita, as I found that his proportions for characters were better than the last issue, and he provided a good scope of Clark's life in the Navy. Romita, I've noticed, really likes to use eye level shots on almost all his scenes. He shies away from using perspective shots, which is a disservice to a character like Superman, who traditionally flies around everywhere. Romita managed to keep us at the same level as Clark, which I must admit, gave a more personal feeling in many scenes, as it took us right into the action with him. But there were some missed opportunities during the action scenes I feel.

Romita is also great at small detail, like the rain drops on characters, character facials, features and accessories and environments. He leaves just enough negative space for the Colorist to work his magic.

Lori Lemaris got a new redesign. Romita gave her a more Japanese Geisha look, and she actually looked like she belonged in a different world. It was a bit jarring at first, but I grew too actually like the look as the issue went on.

Though the writing didn't do it any justice, the reveal of Clark in his Superman suit was quite epic. It reminded me of the shot of Henry Cavill in the "Man of Steel" film, as he dons the suit for the first time. The shot of Clark looking into Atlantis also reminded me of a scene from the DCEU films, namely Jason Mamoa in "Justice League". Regarding the suit, other than the square buckle, and extra detail on the boots, the only real change is the "S" shield. Which is appropriate as it's a throwback to a classic look, and this is an origin tale.

The Kraken fight was good, but what really made it was the tools that Romita used throughout the issue, which was he didn't shy away from using multiple panels on each page. Splash pages were used very sparingly, but 99% of the story was told on pages that had 5 or more different panels. This I respected a lot, as it helps the narrative flow smoother.

Danny Miki's inks are astonishing, he really enhanced Romita's line work a lot, as well as adding his own flair on each page. Coupled with Alex Sinclair's colors, each page popped out at you. Really looking forward to the next issue.

Cover Art - 4: I like the composition of the cover quite a bit, as it shows the scope of a young Clark's powers, and is kind of a snapshot of him fighting the Kraken from this issue. The shading makes the suit look completely black with a red cape and no trunks. Only real downside, like the cover for issue one, the leg is a little out of proportion, has his hamstring looks under developed. Some great use of color and lighting as well.