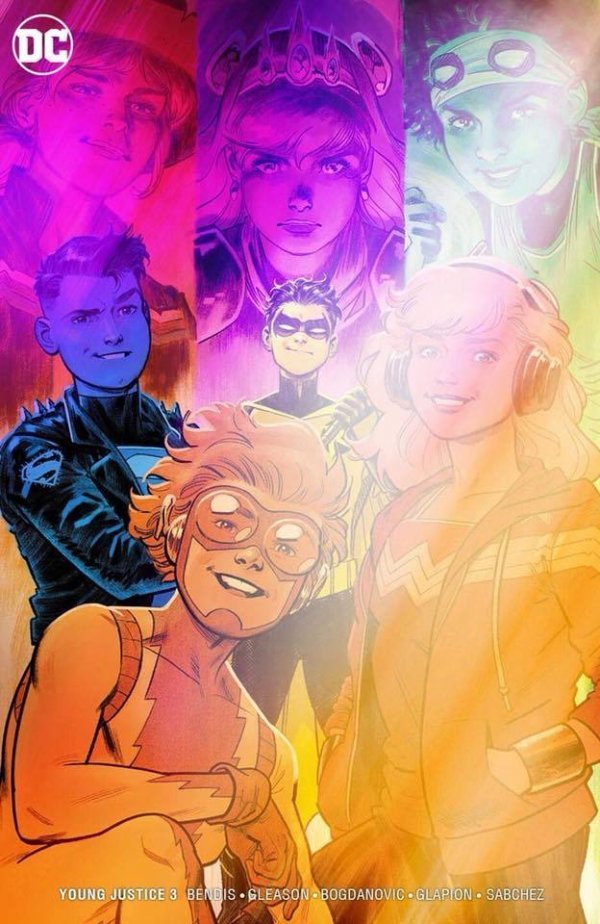 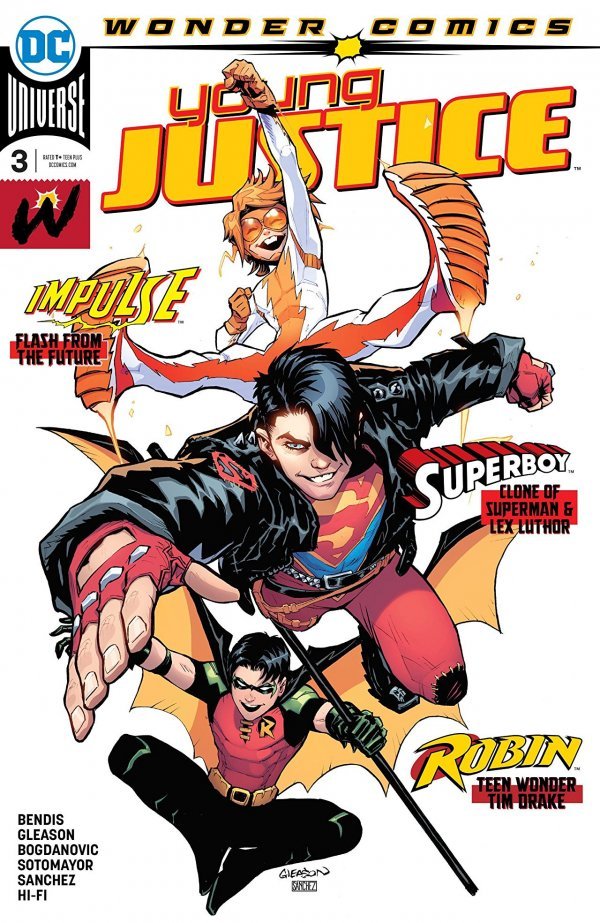 Reviewed by: Keith Samra
Click to enlarge
We pick up, where we left off in the first issue, with the young heroes still stuck on Gem World, and Bart has just found Conner. They are interrupted by Carnelian from Opal, who demands to know why Bart is on Gem World. Bart challenges them to a fight, only to learn that Conner has surrendered already.

Conner thinks back to his last days on Earth before he gets transported to Gem World. He gets questioned by Carnelian regarding his costume, when a woman holding a baby asks what is going on. She is apparently Conner's wife.

We end with Robin and the rest of the young heroes in captivity, as they discuss where they are, and how they plan to escape.

Story - 4: I have waited for this issue, since the announcement of the relaunch of this series, and as I have professed my love for the original series as well as the character of Conner Kent.

Bendis explanation as to where and why Conner had been missing for so long was the highlight for this relaunch. Did it disappoint?... Not really, but its Bendis style of writing that I found most frustrating. And let me clear that up, it's not the content that bothered me, but the way Bendis writes, that I find a little jarring. Maybe it's that these issues feel too episodic or the fact that Bendis drip feeds the story, or maybe even it was my own expectations that were too high, but I was left feeling a little unsatisfied after having read the issue.

Bendis did deliver the goods though when it came to Conner, as we saw when Conner disappeared from his days in the late Teen Titans run, before Flashpoint. The fact that Conner comes to the conclusion that it's madness for him to have some sort of a secret identity, when he could be out there "superhero-ing," really felt like something from the early days of the character, back when Karl Kesel was writing him. The best part for me, meant that he was no longer the emo, almost a Marvel like mutant character from the X-Men, which seemed like he hated the fact that he even existed. The fact that he has been on Gem World for quite some time, as a farmer no less, with a wife and possibly a child will only add to the upcoming drama as the series progresses. Bendis left me wanting to know more about this Superboy, and that in my book is a good thing.

I want to address Bart real quick (no pun intended there), much like Superboy, we have seen that Bendis return Bart, who was last seen as Kid Flash, back to his Impulse persona. I have no doubt that Bendis will address this change, I hope that it comes sooner in the run than later. I love Bart this way, he was another character that became far too serious at times in the Teen Titans run.

Lastly, again we are given a small clue, as to how the many Crises' on Earth have affected Gem World, and also that the denizens were up to something on Earth when Conner stumbled upon them in his flashback, before he was transported to gem World some time ago.

After a lull of the last issue, I'm happy to see this book back on track with some energy to it, looking forward to the mystery of Conner unfolding in the issues to come.

Art - 5: Patrick Gleason is great on this book. There is a certain kinetic charge to his art that keeps the narrative flowing. My only complaint is that there is not enough of his art in this issue. This may not be Gleason's fault, we know that Bendis loves to work with other artists, especially when it comes to flashbacks and side stories. Gleason's animated facials on the characters, bought out the emotion that the writing required for each panel and each page, and teased the upcoming action for future issues. I have been a fan of Gleason's work since his Aquaman run in the mid 2000s, and it seems his visuals are only getting better.

There was some noise regarding his "modifications" too Conner's classic Superboy suit, with the knee patch, spiked jacket and lace up boots. My only advice is, give it a chance. We have so far only seen a handful of images of his initial designs, and like many artists have done so in the past, I'm sure there will be some sort of evolution to the look from the initial designs, also like in the movies, we must see how it looks in action, as opposed to just a static image.

Victor Bogdanovic pencilled with Jonathan Glapion inking them, made up the flashback part of the issue, and I'll be honest, as much as I enjoy Gleason's unique style, I loved the way this pair handled their section of the issue. Conner actually looked like a teenage kid, his fashion sense conveyed that. I loved the way the oversized glasses altered his face, giving it that Clark Kent charm. The rip in the jeans, and the sneakers was a nice touch. There is a certain quality to his art that reminds me of Greg Capullo's work, which is not a bad thing by any stretch. It was just a nice way to separate the sections of the book.

As always, Alejandro Sanchez outdid himself, coloring this book, and bringing it to life.

Cover Art - 5: Gleason's cover is simply amazing, as it features the three original Young Justice members. Love Superboy centre stage, with that mischievous look in his eye, the attitude of Impulse, and the smile from best Robin since Dick Grayson, poster worthy cover.

Variant Cover Art - 3: I like Doc Shaner's art, his style is so very retro, he's perfect for certain characters and period piece stories, sadly there is just not the hip feeling from this cover that this book has. Other than Robin, the rest just look too classic, still a solid composition though, with an awesome choice of coloring.