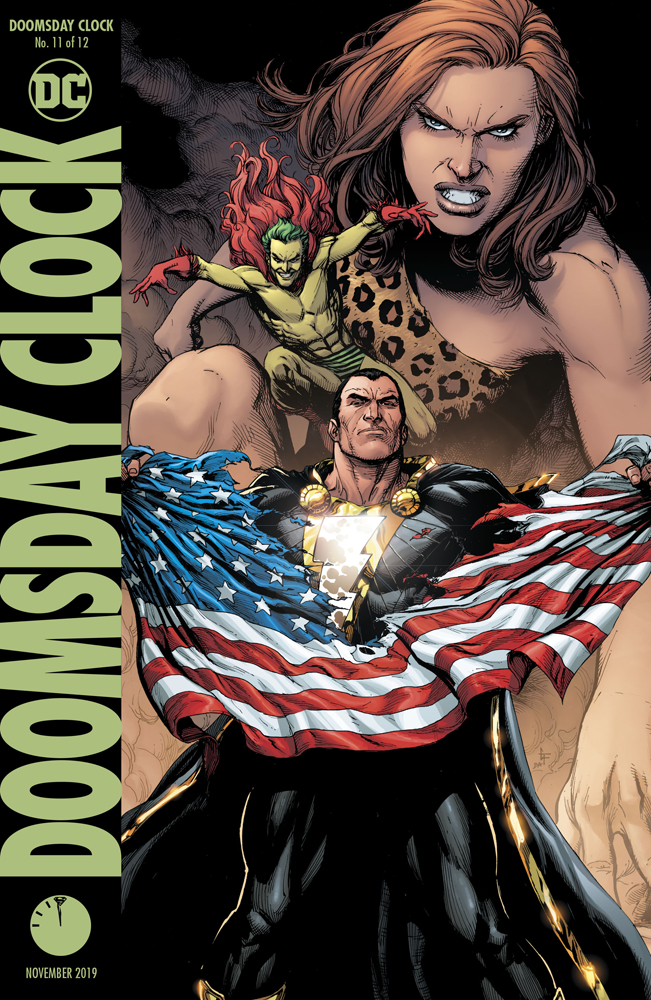 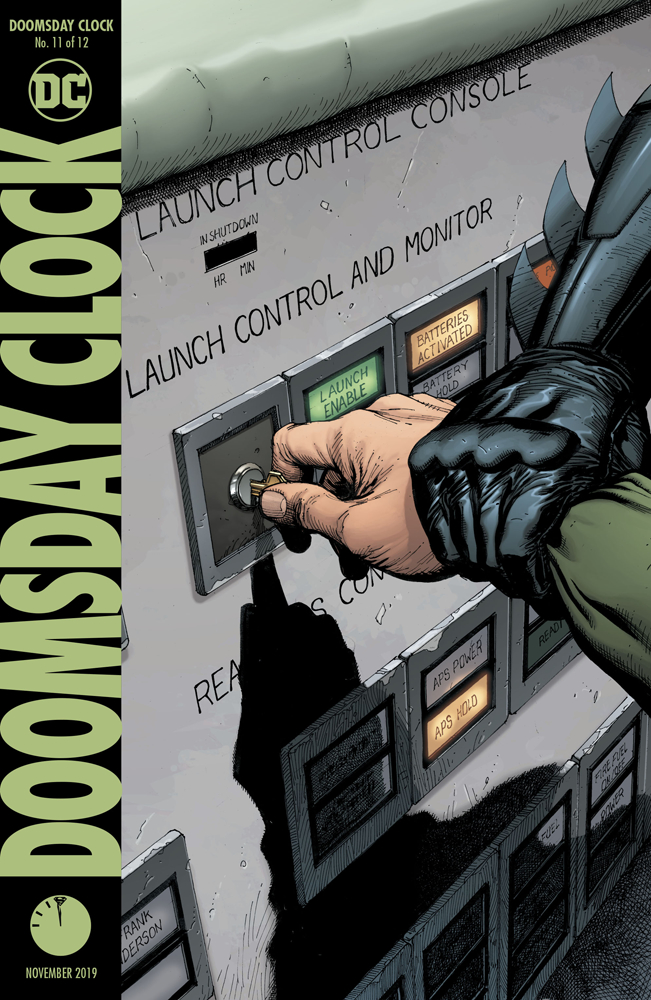 Reviewed by: Keith Samra
Click to enlarge
We open with Batman stopping US soldiers from arming nuclear missiles, in retaliation to President Putin's threat to invade the America with his meta-humans, if the US government doesn't turn Superman over to them.

We cut to news reports, of Wonder Woman protecting the UN against Black Adam's forces. Somewhere in a remote location, Ozymandias watches these events on multiple different TV screens, and smiles at his handiwork. He has the amnesiac Saturn Girl and Johnny Thunder held captive, along with Alan Scott's Lantern power battery.

Elsewhere Lex Luthor shows Lois Lane the research and evidence he's gathered regarding the arrival and tampering of the timeline by Dr Manhattan.

Alfred prepares pancakes and goes to look for Reggie, to tell him that they were wrong to doubt him, and that they need Rorschach now more than ever for the coming battle.

Black Adam and his acolytes attempt to storm the White House, when Superman arrives to stop them. We then cut to Ozymandias, watching as his grand scheme comes together, and we see Saturn Girl fade from existence. The only traces of her that remain, is her Legion flight ring.

Story - 4: Too much exhibition, not enough action, this was my initial thought after I finished reading this issue. This may have to do with the fact that I was expecting a major throw down between Wonder Woman and Black Adam which was teased at the end of last issue. I also was expecting more from Superman seeing as how he has finally awoken since the incident with Firestorm in Moscow. I have been patient and championed this series throughout the many delays, but couldn't help but feel a little let down, that Johns followed the model of Watchmen #11 so closely. This may be just my feelings toward it, seeing as how I'm such a big fan of Black Adam, and relish any opportunity seeing him and Superman go at it. All we got sadly was a shot of Superman being thrown with great force, right to Dr Manhattans feet. The tense relationship between the US and Russia escalated further, with Vladimir Putin, threatening to invade the States with his own meta-human army if Superman isn't handed over to them, was an interesting aspect explored by Johns, and much like a couple issues before, President Trump gets no screen time whatsoever, save just word balloons and shots of his arm. Johns has put politics on the forefront in this series, we knew this from the very beginning, and he has done a decent job of using the current political climate to draw a parallel to the story he is telling, but I feel that sometimes he getting lost in the finer details, and forgetting what and why we love these characters and books. Or simply, he is just trying to emulate Doomsday Clock very closely to Watchmen. Speaking of parallels, there definitely is that with Ozymandias and Lex Luthor, as both run a narrative explaining their plans and recent past histories. I found Lex's narrative more compelling, as we learned that he has been investigating the arrival of Dr Manhattan for quite some time, as he shows Lois the evidence he's collected of a photo that has appeared multiple times through multiple copies throughout the decades. I thought this was such a clever idea, and Johns managed to execute this perfectly. What I loved the most was his call back to the Rebirth Special, and we learn that Lex witnessed the return of Wally West. The opening with Batman stopping potential nuclear war was great. Though I'm sure it wasn't the intention, it reminded me of the fantastic battle from Batman v Superman, where Batman fights the thugs in the warehouse. I wish we had gotten to see more. As well as Wonder Woman's battle with Black Adam, Giganta and the Creeper, and with most of the heroes still on Mars, only the trinity remain to hold order. Feels like wasted potential... or maybe it could be a set up for the next issue. I felt a little let down with this issue, seeing as how we are in the endgame of this series. We will finally see the showdown between Dr Manhattan and Superman, but there are still so many unanswered questions and plot points. Until the conclusion of this series as a whole at the end of next issue, I'll reserve my opinion on it until then. I'll also address the Justice Society making its return in the pages of Snyder's Justice League book, and the Legion in Bendis Action Comics. For now, I'm looking forward to seeing how Johns will conclude this series, and hold hope that we will see a lot more action in the one issue remaining, as well as see what possible tampering Dr Manhattan has done to Superman's life.

Art - 5: The art is the aspect that has been taking the majority of the blame for the delays to this series. And if that is 100% true, it was definitely worth the wait in my opinion, as Gary Frank has done some of his best work in this series. I'm always tempted to flip through the pages before I read the issue, so I can let the art summarise the issue for me. Sometimes that can be detrimental to the enjoyment of the issue, but on some occasions, I had found that without the words, the story is quite easy to follow.

There is a beautiful shot of Superman from behind on page 14, as he is tucking his cape into his collar. It's an almost throwaway scene, had it not parallel the Dr Manhattan panel before it, however, for some reason, this particular panel just became my absolute favourite in the entire issue. Actually all the Superman scenes were the most enjoyable for me, from seeing Superman get up from his hospital bed, to him donning his suit again, to head into battle. Frank has always had a good handle on Superman, and thankfully he has toned down the emulation of Christopher Reeve, from his Action Comics run.

I loved Frank's rendition of other characters too, such as Batman, Black Adam and Wonder Woman. There's a beautiful panel that features many members of the Justice League, which I wish I could own the original art for.

George Perez has always in my eyes been the best at group shots, with his ability to jam pack so many characters into a page or even a panel. Frank in this issue impressed me with his group shots, particularly the one of Black Adam and his acolytes walking across the White House lawn, just as Superman arrives.

Alfred making pancakes was also something that stood out to me, just at how Easily Frank was able to relate it back to Rorschach.

As I stated, I was waiting for the showdown between Black Adam and Wonder Woman, and then Superman, however this is not Franks fault in any way. Frank brings his A-Game as he has done so throughout this series. He has successfully managed to channel Dave Gibbons, whilst still keeping his signature style.

Lastly the final page, as Superman and Dr Manhattan meet for the first time. I loved the zooming in of Dr Manhattans head symbol, signifying the fact, that the clock has now hit 12.

Brad Anderson's colors were as beautiful as usual, helping with the tone and feel of this book. He has been an underappreciated member of the creative team I feel, and I want to acknowledge his efforts and give him his dues.

Cover Art - 5: This cover is depicts basically the first panel in the book, Batman stopping a nuclear strike. The cover was the first image I saw when I began my read for this review, and basically got me excited to what I was about to read.

Variant Cover Art - 5: Now this cover is what gave me goose bumps when I saw it. It led me to believe that I was about to get what I had anticipated for months, especially through all the delays... Sadly that wasn't the case. A great "what could have been" for this issue.