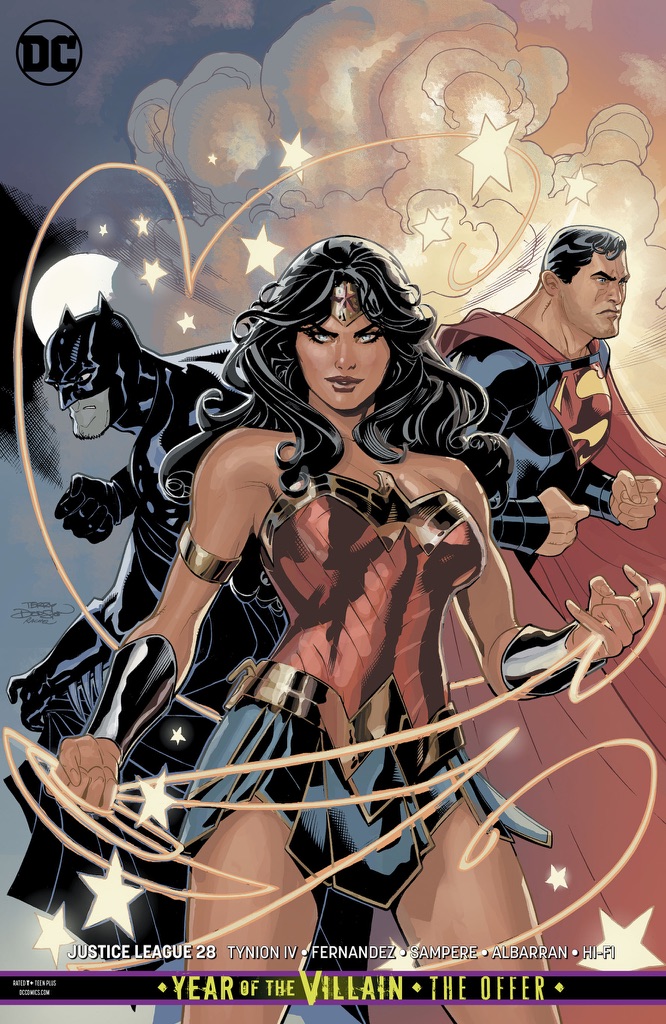 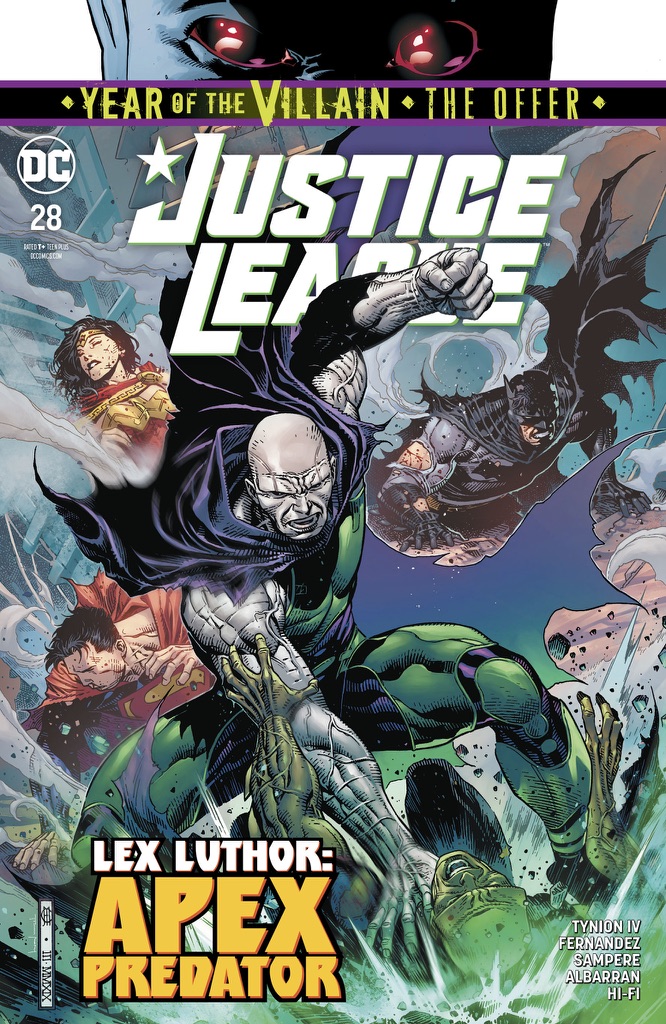 Reviewed by: James Lantz
Click to enlarge
The World Forger and The Monitor join the Justice League in searching for the Anti-Monitor. What they find is the weaponers of Quard slaughtered with a message in an ancient language. It reads, "Do not follow me." They are then left with a diversion courtesy of the Legion of Doom. There is no choice but for them to retreat. Otherwise, Sinestro will activate the ultraviolet light under John Stewart's Green Lantern ring, leaving the rest of the League unprotected from the anti-matter. They could leave the multiverse unprotected from Perpetua's forces.

Shayne, Starman and Jarro are planning for something dark and twisted to arrive. To stop it, Jarro must aid Shayne in joining with Starman's mind. What they discover could either help the Justice League or bring about the end of all existence as we know it.

Hawkgirl has been knocked unconscious telepathically by Martian Manhunter. He must confront Lex Luthor about his plans to bring about doom with Perpetua. Lex in turn offers J'onn a chance to join him. Yet the Martian fears his former friend has gone insane. This forces Luthor to take DNA from J'onn, making the head of the Legion of Doom part of his father's dream of the Martian/human hybrid Apex Predator. Hawkgirl unsuccessfully tries to stop Lex from absorbing J'onn. She is too late. Lex Luthor is now an Apex Predator ready to aid Perpetua in obliterating and re-creating the Multiverse.

Story - 4: While the conclusion/lead-in to the next issue is more satisfying compared to previous chapters, the absence of Scott Snyder is felt. The balance of character moments, action and twists and turns he provided this title are there. Yet, they are not present in the way he does them. This, combined with the fact I haven't had a chance to read the Year of the Villain story as of this writing, make it a good, bout not great story. Still, it's worth buying and reading with the rest of this series.

Art - 3: The art has improved since the last issue, but that isn't saying much considering there's still room for improvement. Two artists on the same issue of a series can often cause drastic visual changes in storytelling that breaks up the flow of the comic. This is the case here. Hopefully, we'll get 1) someone who can stick with this title for more than a story arc, and 2) give this book the epic feeling it deserves.

Cover Art - 3: Luthor and Superman's heads look off kilter in this cover. That's a pity because Jim Cheung is capable of doing better work.

Variant Cover Art - 5: Wonder Woman takes center stage in an awesome cover by two of my favorite artists. This one was beautifully drawn and works perfectly for this issue.