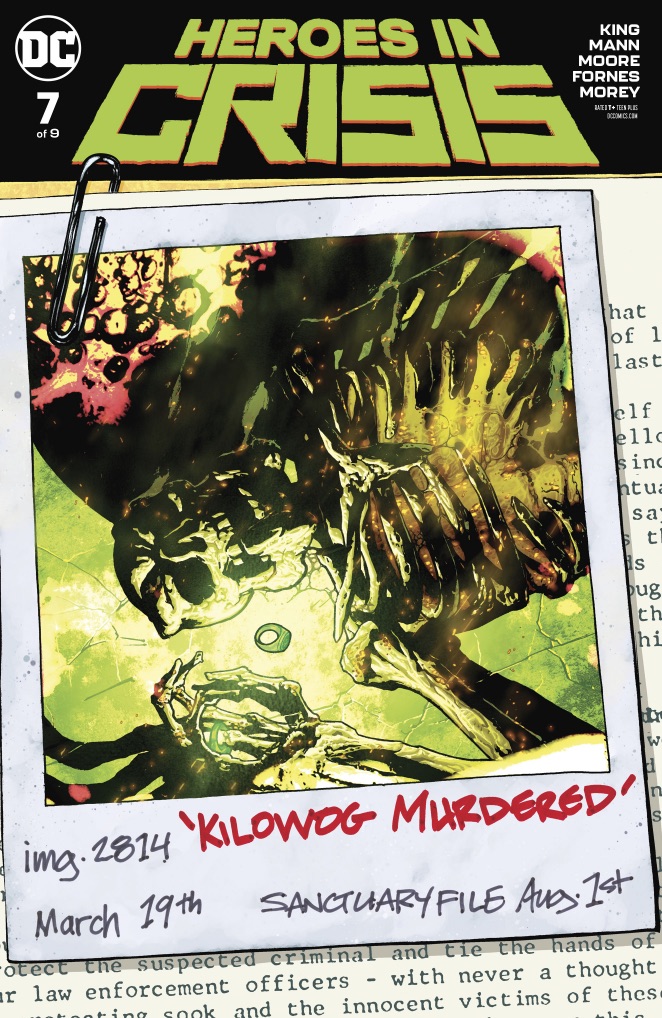 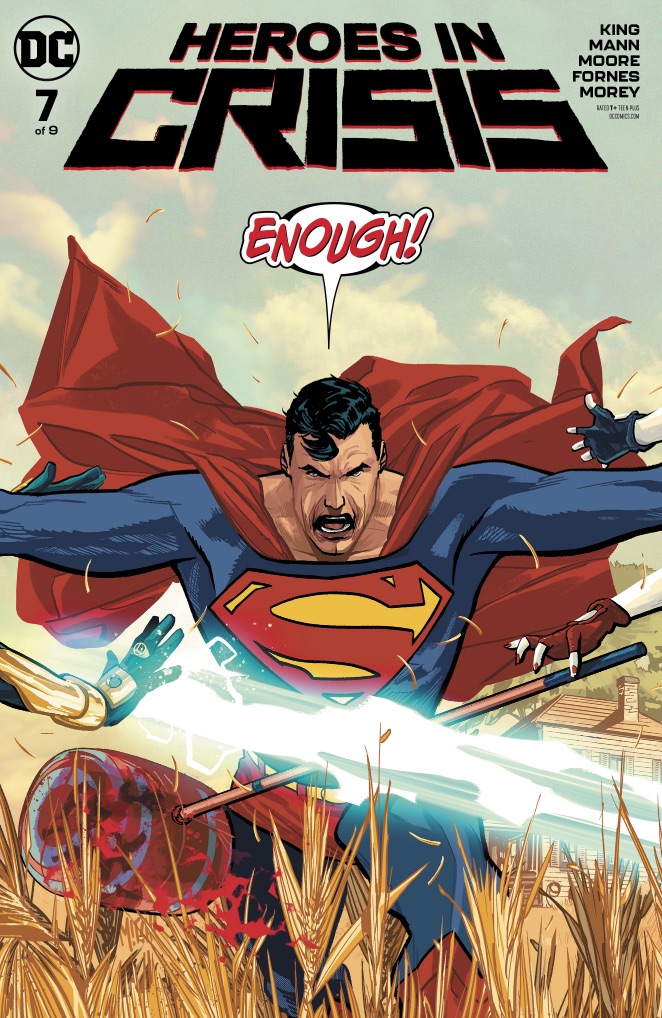 "Too Fast To Save The World"

Reviewed by: Keith Samra
Click to enlarge
We open with Wally's tapes at Sanctuary, and follow as he spends his first few days and weeks at Sanctuary.

Batman and Flash search for Booster Gold and Blue Beetle, but keep coming up short, meanwhile Batgirl and Harley have caught up with the two wayward heroes, and there is a small comical battle between Harley and Booster.

We end with a revelation about Wally and what he planned to do.

Story - 4: So this issue seemed very pivotal in the overall story arch, yet raised a few more questions than it answered, but it great reminders that we really can't judge any of these stories without having read the entire run first. I was convinced that Sanctuary had gained sentience, and was responsible for the deaths of the heroes, but we learn this issue that that is not the case. And that this book doesn't actually feature Booster and Harley as the two main characters, but Wally is a foundation stone of the whole story. It would seem that Wally's psychological trauma is more severe than what we initially thought. Now I know that many will criticize and many (like myself) have a hit or miss relationship with Tom Kings writing, But let's actually think about what Wally has been through, from disappearing into limbo at some point during Flashpoint, and coming back in Rebirth, without his family and learning that they do not exist anymore. This would drive any man crazy, and I would even put Superman in this circle. Characters like Batman and Punisher became dark avenging creatures of warfare against crime, while others like Black Adam and Magneto became tragic super villains/anti-heroes.

Wally in this case has become somewhat suicidal, and this is the very type of story that King promised when this project was announced. And rather than give him a hard time for this angle, I want to commend King for taking a risk, and adding a layer to Wally's character in such a way. We forget that some of our heroes aren't perfect, and traits like these add to the overall characteristic of a hero's journey. Just look at his fellow Titans, Dick quit being Robin due to Batman's over compulsive attitude, taking on a whole new identity just to get out of his mentors shadow. Roy is a former addict in recovery, now a solo father to boot. Starfire is an intergalactic refugee whose family sold her into slavery. So having Wally suicidal for losing his family to cosmic events, and he has to keep on living knowing what he lost, isn't that far of a stretch, and again I commend King for attempting to tell a story such as this. As fans sometimes we can attack creators over moments like these, without seeing the bigger picture that they are trying to reveal.

Tom King has had a plan throughout this run, and I have a feeling that we will see many of the plot threads that are left dangling, tied up. Just as a reminder, here are a few that I can recall off the top of my head. The "Puddlers" whom released the tapes to Lois, and took responsibility for doing so, Sanctuary's attempts at learning and understanding the problems of the heroes and lastly the peoples trust in the heroes and their mental stability. Last month's issue was fantastic and emotional, there was less of that this month, but this issue is a stepping stone to the conclusion of this tale. Really looking forward to seeing how this story will wrap up.

Art - 5: Clay Mann needed help once again, and this time there were two other artists that came on board. Firstly we had Travis Moore, who has filled in during the series in prior issue, and then we had Jorge Fornes, who has a great visual style, but one that is so far removed from that of Mann's and Moore's that it took you out of the story. And this is my only complaint when it comes to different artists on these books. An artist's style can be seen as an actor playing a role, when there is a dramatic shift in that style, it's as if another actor has taken the role of a character midway through an episode or film. Absolutely no disrespect meant toward Jorge Fornes, as his style is very unique, clean and reminds me of a David Mazzucchelli from Batman: Year One.

Other than that, my favorite pages would have to be the ones rendered by Mann featuring Wally, especially the opening splash with Wally in the field of roses, as they spell out "Heroes in Crisis".

The coloring was fantastic by Tomeu Morey as usual. Just goes to show that the colorists are unsung heroes of the industry.

Cover Art - 3: This cover is really misleading, but good work by Mitch Gerards. I just hate that Superman is basically advertised on the main cover, and there is not even a mention of him in the book. Has a very Lenil F. Yu Superman: Birthright feel to it.

Variant Cover Art - 5: The snapshot of the past this month is the death of Kilowog, at the hands of Hal Jordan after he went crazy, just a fantastic historical moment in DCU history.