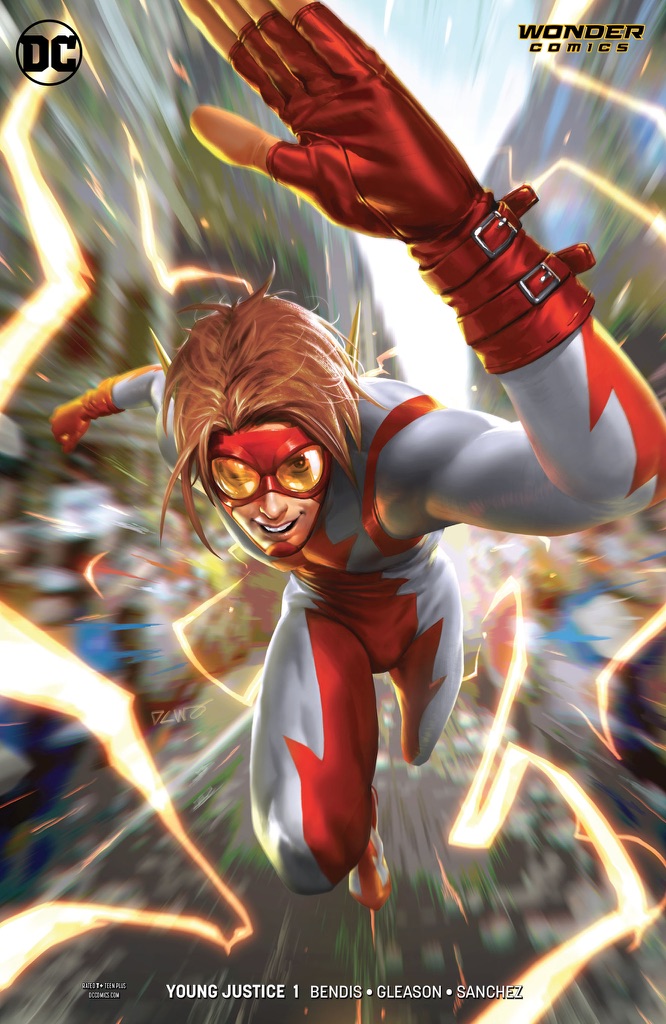 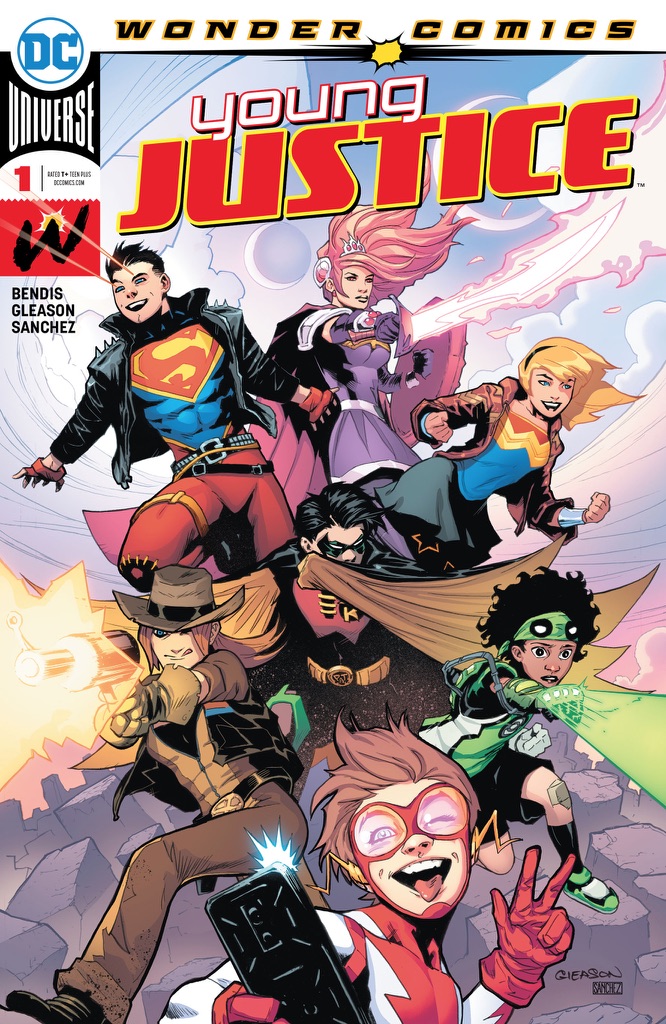 Reviewed by: Keith Samra
Click to enlarge
Our story begins on a distant world, where a man crosses a desert terrain, to a temple of sorts, and advises his peers that he has figured out what happened to him and the others. He goes on to explain that it has to do with one of the seven Crises on Earth. At every Crisis, the course of the natural history of Earth is changed, that has many ramifications.

On Earth, in Metropolis, a police officer pulls over a pick-up truck that is being driven by a young Texas woman that has decided to move to the big city. She introduces herself as Jinny Hex. Suddenly the sky begins to swirl, and seven beings appear out of what looks like a dimensional portal.

The seven beings demand an audience with Superman, for the strife that they claim to have suffered, and they begin to attack the city. Jinny Hex lends a hand, to fight off the threat, and is joined by Robin/Tim Drake. The events seem too heavy for them both, when they are aided by Wonder Girl/Cassie Sandsmark. The three of them help fight back the invading beings, when another two players joins the game. Impulse/Bart Allen arrives in traditional speedster fashion, by helping evacuate the innocent bystanders from harm's way, and a new female Green Lantern, going by the name of Teen Lantern, also lends a literal helping hand.

The would be invaders get frustrated at the young heroes who seem to have stopped them in their tracks, and retreat back to their dimension, only for the unofficial Young Justice team to give chase. Robin finds himself at the mercy of one of the invaders called Amethyst, while Impulse wakes and finds himself in a strange other worldly land. As he questions where he is, he is greeted by someone that has been missing from the world for a long time, it is none other than Superboy/Conner Kent.

Story - 5: Well, I was pleasantly surprised after I finished reading this issue. When this series was first announced, I immediately emailed Steve, and asked him if I could review this book, and I was ecstatic that one of my favorite titles from the 90s was making a comeback, and with three of the core members no less. Then I remembered that Young Justice was originally cancelled to graduate the cast to the (new) Teen Titans of the 2000s. I was more than a little trepidatious, as all three of the core members that I mentioned before had been "mishandled" in my view, by the "powers that be" at DC. Superboy/Kon-El was and has always been my favorite character of the 90s, followed by the Robin (other than Dick Grayson) that I grew up with, and Impulse was just one of the most amazingly enjoyable characters that I ever read back then. Over the 2000s Superboy got an updated origin, died, came back emo-like and then the New 52 happened to him, and he was lost and practically written out of existence. Robin was forced to take a back seat to Damien Wayne, and Impulse was forced to grow up, and then got lost somehow in the constant reshuffling of the Teen Titans. Bendis however managed, much to my surprise and delight, to bring back not just these three mainstays, the Trinity of the 90s-mid 2000s teen heroes if you will, but he also brought back the one thing that made them so lovable in the first place... Their personalities!

Impulse was just as his name sake, Impulsive, and fun. Robin was the ever ready soldier trained by Batman, living up to the legacy of the name Robin, and finally Superboy, though we just see him for a brief moment at the end, he just looked as close to the 90s Superboy as possible, and I really cannot wait until the next issue to see how Bendis will bring him back, and the way he will tell that particular tale.

Bendis did something amazing in the opening pages of this book, something that I myself never knew how to explain to any of my friends or anyone that enquired of me, regarding the many and different Crisis events over the many years. Which was how to easily break down and explain the purpose of them, for DC continuity. Bendis did this in a simple sentence, stating that an Earth Crisis is an event that changes the Earth against its natural evolution... It was that simple. Well done Mr Bendis, hats off to you good sir. In fact, I am now curious what a Bendis written Crisis may be like, he seems to know the characters and history well. I'm sure he may get a chance in the not too distant future.

Character wise, Bendis managed to capture the personalities of the core three perfectly, and injected some mystery as to why Cassie Sandsmark/Wonder Girl is hesitant to act, during an attack. Though he did say that she is the grand daughter of Zeus, which is odd, as she was revealed to actually be the daughter of Zeus in the past, if I'm not mistaken.

We have a few new characters to deal with. One is Jinny Hex, no surprises as to who she is meant to take after. The Teen Lantern, I guess we will learn more about here soon enough, though Earth does seem to have quite a collection of Lanterns lately. The last being Amethyst, who the same as Teen Lantern, we will have to wait and see, to learn her deal.

Lastly, I love that the event takes place in Metropolis, and that Superman gets name dropped so many times. There is even a call back to Action Comics #1000, where a diner that Superman is thrown through by Rogol Zaar is once again the scene of another Super Hero showdown. Also loved that Impulse, in classic fashion, jumps the gun and announces that Young Justice is back together, to which Robin corrects him, "Not without Conner". I loved that line!

I'm super excited about this title, and just happy that we have more than just Super Sons that will be a little more light hearted and fun to read.

Art - 5: Patrick Gleason on the art duties felt like it fit like a glove. His style has a comedic element, due to the more animated his characters look. And the fabulous detail that he is able to put in every page makes you go back and just look, and try to pick up anything that may have been missed at first glance.

Regarding the core three, Gleason has managed to keep the classic looks, but update them at the same time. Impulse has very subtle differences, while Robin has a little more of an armored look, but in the classic Tim Drake color scheme. Judging purely from preview art, and the one page that we see him on, Superboy is very much in his 90s (Reign of the Supermen) suit, with subtle, yet obvious changes. From the spiked and patched grungy look to his signature leather jacket, to the now finger-less red gloves, and the "Doc Martin" style lace up boots. Though I wish that he would have gone a more contemporary hip-hop route, like Miles Morales look in the Spider-Man: Into The Spider-Verse animated movie, instead of the more "punk rock" look, I applaud the finesse that Gleason used, in simply bringing back this classic suit.

Narrative wise, Gleason shines bright, in the way he lays down the visuals, keeping up the high energy during the action, while playing with the expressions on character faces, in the more personal moments. At times the story was hard to follow, but nothing too major or head scratching.

Really loved the Transformers Easter Egg, in the panel with the bird's eye view of Jinny Hex being pulled over, I'm pretty sure that is the classic G1 Hot Rod, that swerves past Jinny's pickup truck.

Of course credit needs to also be given to Alejandro Sanchez for his fabulous coloring of the book, as he bought to life the pages, with his palette.

Excellent art, coupled with good writing, this is a book not to pass on.

Cover Art - 5: The main cover does exactly what its meant to do, show the main players of the book, and make you want to pick it up.

Variant Cover Art - 5: Though beautifully drawn, the cover featuring the new character of Amethyst is just not enough to excite you to pick this one up. I love the Bart cover, but he seems older than what he is portrayed in the book. Beautiful art though. The Robin cover is another perfect cover, for this book, it seems like it looks that it may be one of many interlocking covers to come. The Superboy one is a personal favorite. Rendered by the awesome Jorge Jimenez. It's an awesome shot of Wonder Girl for her cover, but I'm not a fan of the computer coloring over pencil look. I prefer inks over pencils. The B&W version of the main cover just loses some of the magic without the colors.