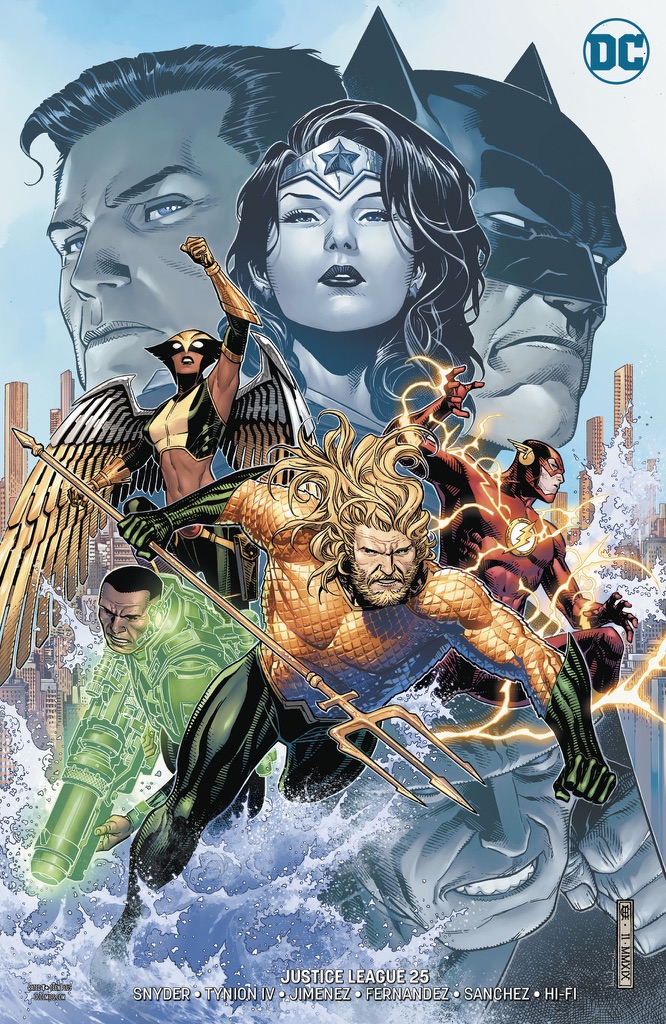 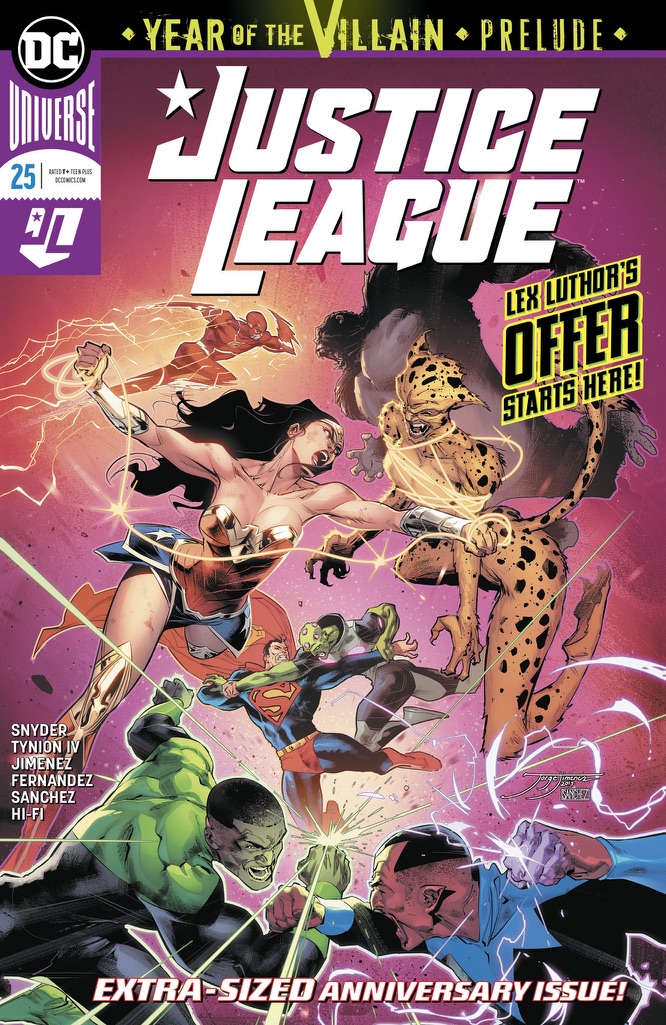 Reviewed by: James Lantz
Click to enlarge
Superman continues to use his memories of time with his father and son to hold on to hope while trapped in Sixth Dimension darkness. Batman is offered a chance to change his colleagues minds. If he doesn't, the World Forger will destroy the multiverse and reshape it. Either way an infinite amount of innocent lives will be lost no matter what the Justice League does.

Batman has betrayed the World Forger in spite of feeling as he does about the current situation. Batman also believes that Superman would push through the darkness and find points of light to physically and emotionally help him escape to confront the Forger. However, the battle ends in an unexpected way. The World Forger is made a member of the Justice League. He and the League may have a better chance at saving the multiverse as allies rather than enemies.

Story - 5: Team books have to be harder to write compared to comics centering around one character. Scott Snyder seems to be able to handle the Justice League and the scope of its adventures and character arcs at this point in the series. I find myself growing more impatient to read what happens next as he puts Superman and company through the wringer. If he ever leaves this title before finishing his overall story, I guarantee DC will hear some harsh words from me.

Art - 5: Jorge Jimenez has a style that works perfectly with Scott Snyder's storytelling in this series, much like Greg Capullo's does for Snyder's Batman, which I've given a second chance. Jimenez gives this book the cosmic, edge of your seat epic feeling it deserves.
"The Message"

The Justice League return to Earth to find a week has passed since they left: Lex Luthor and the Legion of Doom saved Earth from Mister Mxyzptlk by unleashing Bat-Mite on him. Now, after having sold LexCorp and given his inventions to those he deems worthy of them, Luthor has revealed the Justice League was responsible for the Source Wall's destruction and the resulting dying universe, leading humanity to lose trust in the world's greatest heroes. Now, Lex is offering to allow people to unleash their inner darkness with his Legion of Doom. The Year of the Villain is almost upon us as choices are made and sides are taken.

Story - 5: I said in a recently published character study on Marvel's Radioactive Man in Back Issue #112 that heroes and villains as concepts are a matter of perspective. This seems to be the case in this prelude to DC's next event. The story itself relies mostly on dialogue from the characters, particularly Luthor. Yet it gets its point across by recapping events of previous issues and leading into the ones about to be released. There's no rest for the wicked, but who is truly wicked? We'll surely have our views on that as this series progresses.

Art - 3: The art, while not really bad, does not seem to fit well with what was drawn in previous pages in this issue. Perhaps I'm too picky, but it just doesn't work for me as well as what Jorge Jimenez drew for this book.

Cover Art - 3: This cover suffers a bit from having too much crammed into it. Considering Jorge Jimenez is perhaps my favorite artist on this book, I expected more from him.

Variant Cover Art - 4: I prefer Cheung's X-Men work, and Aquaman's face looks strange. (Where the heck is he anyway?) In spite of that, this cover is well done and worth a look.