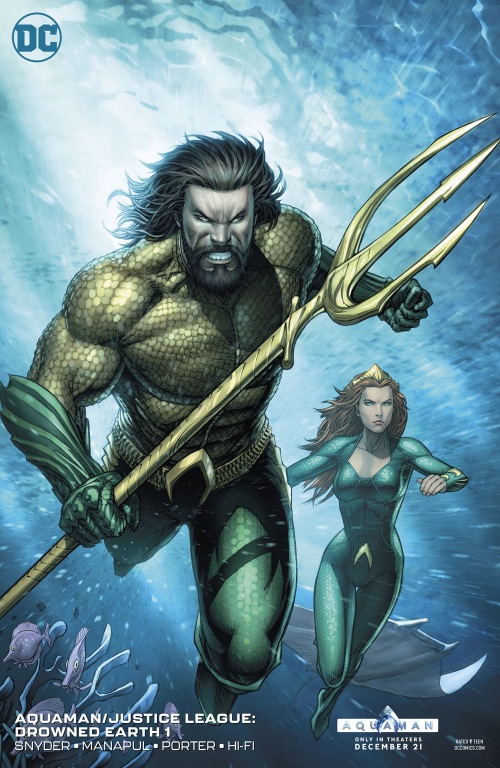 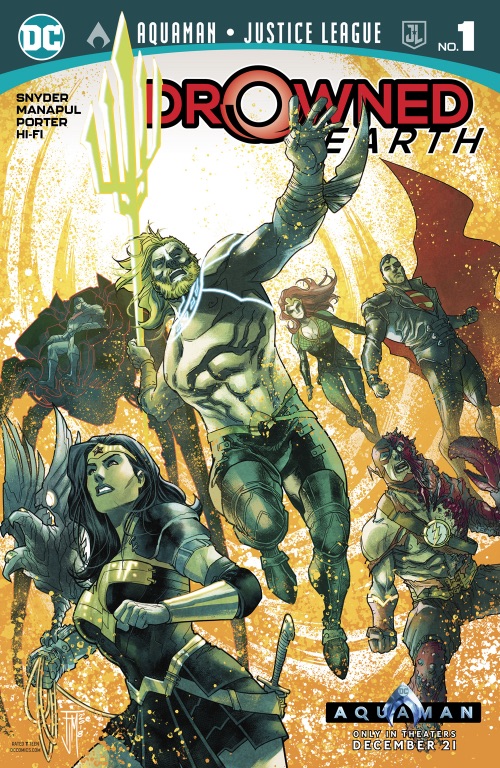 Reviewed by: James Lantz
Click to enlarge
Drogue. Tyyde. Gall. Three extraterrestrial sea gods wronged by Poseidon. Now, the Tear of Extinction's power is diffused among Cheetah, Black Manta and Mera. The latter must combine it with Poseidon's trident currently in the possession of Aquaman to save Earth, but for that to happen, Atlantis may have to die. Aquaman and Mera, along with the Justice League must do everything they can to save the world before the Death Kraken arrives. If they don't, the planet will be annihilated under water.

The Legion of Doom has the Totality. Wonder Woman and Batman are at the center of the Earth activating switches that will launch Atlantis at the barrier blocking Earth from outside help from intergalactic heroes. This will send Mera's kingdom into space. Meanwhile, with the planet's population and its superheroes turned into sea beings, Mera and Aquaman attempt to negotiate with Gall, Tyyde and Drogue as the Tear of Extinction melds with Poseidon's trident's power. Things could go either way until Black Manta stabs the three sea gods and betrays Lex Luthor. As a result of his actions, Manta now has the crown that could control the Death Kraken. Aquaman's powers return to him once it's realized that Black Manta is unworthy of them. Will Aquaman be able stop his old foe and prevent the destruction of Earth?

The battle with the Death Kraken does not go well. It's too strong for even the Justice League's mightiest members, and only Drogue can control the beast. The only way to stop the creature is for Aquaman to dive straight into it. His life power counteracts the death ones of the Kraken. Aquaman pilots his ship straight into the monster's maw, saving all that exists. Three days later, the world believes Arthur Curry sacrificed his life for that of every being in the world. In reality, he's washed up on a shore somewhere. What happens to Aquaman will be revealed in the next issue of his own title, but the Justice League have their hands full with the Legion of Doom and the search for the Totality.

Story - 5: "Drowned Earth" is clearly meant to tie in with the upcoming Aquaman film. Still, it's been a great story arc. I can't praise this book enough lately. Sure, I was hard on the beginning chapters of its first serial, but this is only because I hadn't read Dark Nights: Metal or No Justice due to not being a fan of Scott Snyder's before now. His work on Justice League has opened my eyes to those other books, and now I just need to catch up on his Batman and Superman Unchained stories. I recommend re-reading Metal, No Justice and the first dozen of this new series. You'll be glad you did.

Art - 3: I'm not a huge fan of two artists on one issue. The drawings themselves merit a four, but some pages look rushed toward the end. Perhaps if the main JL title was only released once a month, those assigned to render its images could get the job done better and perhaps stay on the title longer.

Cover Art - 3: This is typical of a Justice League cover of late, but it's beautifully drawn.