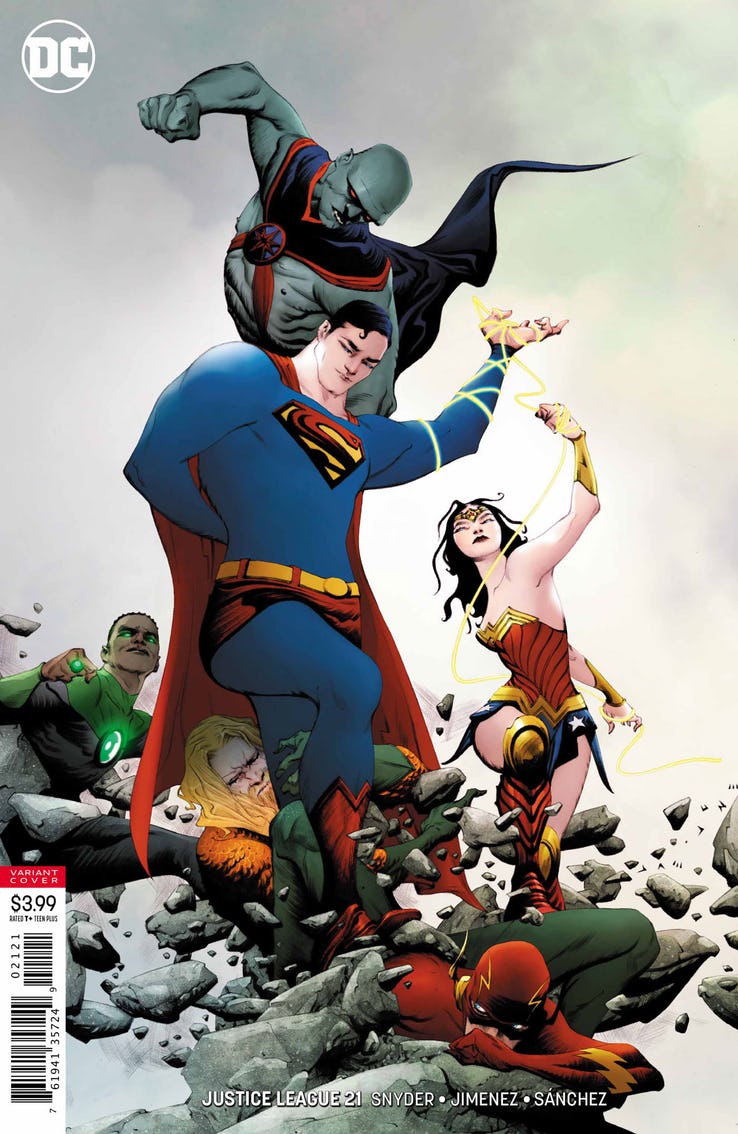 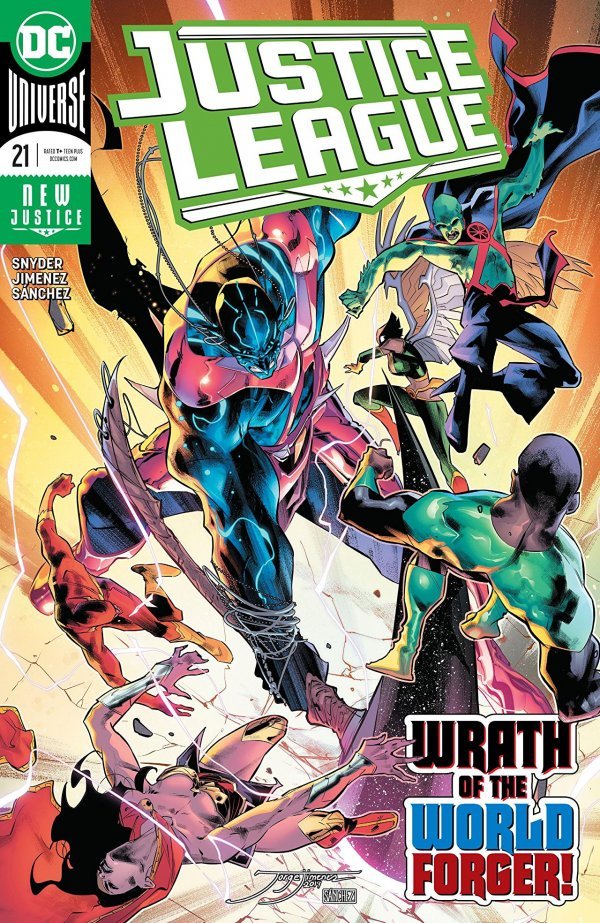 Reviewed by: James Lantz
Click to enlarge
The present day Superman is imprisoned by his future self in a pocket universe where yellow solar energy cannot help him use his powers to escape. On Earth, Starman, Mera and Jarro battle a gargantuan Mister Mxyzptlk, who is unimagining things out of existence to the point of breaking the fourth wall and an artist's pencil. Batman is shown quasi-Utopian Gotham. All these events are but mere steps to a bigger picture, one that could shape and change the future of the Justice League forever.

Future Superman has revealed himself to be the World Forger, son of Perpetua and brother of the Monitor and the Anti-Monitor. He wants the Justice League to take prisoners of war before the coming battle with Perpetua to save the multiverse. However, this would comprise what the team stands for as the beings incarcerated must remain that way forever without any chance of redemption or finding a home. The League's choice could doom all life in the omniverse worse than Lex Luthor's plans for Perpetua. To show them this, the World Forger transports them to a version of Apokolips where all their foes are in prison thanks to the new leader who destroyed Superman, Lois Lane. What has the Justice League in store for them with Lois? How did she eliminate Superman? Will the World Forger confront Perpetua?

Story - 5: Scott Snyder, if you're reading this, and Steve will tell me if you are, you are the only Snyder who should be writing Superman. Your filmmaker "cousin's" version just doesn't work for me. This Superman is one that I really enjoy, not just for Supes, but also for the way the Justice League follows his example and his way to act. Most writers change the character for the sake of the story. This is not the case with this Justice League book. The characters are in character, and they are expanded upon without compromising them. I've said many times, this book is full of brilliant interactions between everybody shown throughout this book. This is just one of the many issues that proves that.

"The Sixth Dimension" continues what has been an overall impressive story arc for the Justice League. Scott Snyder and Jorge Jimenez have taken the bull by the horns and created what could very well be another classic for DC Comics premiere team in the years to come. It's been difficult to impress me with a lot of the current comics out today, but Justice League has done just that. I'll be along for the ride until Scott Snyder leaves the book, which I hope isn't for a long time.

Art - 5: The Mxy monster alone was enough to get me into the art for this issue. However, Jorge Jimenez has shown he can draw cosmic multiverse shaping epics with his work on this title. Keep him as an artist with Scot Snyder's stories, and you've got creative team gold in every comic they produce.

Cover Art - 5: Granted, this image feels like it was meant to hook the buyer, considering the World Forger didn't really fight the Justice League physically. There's nothing wrong with that. I'm merely making an observation. The image is an intense one that was beautifully drawn.

Variant Cover Art - 4: The characters' positions look oddly forced, but I'm a Jae Lee fan. His work normally merits a five. This one just didn't work as well as his other images.