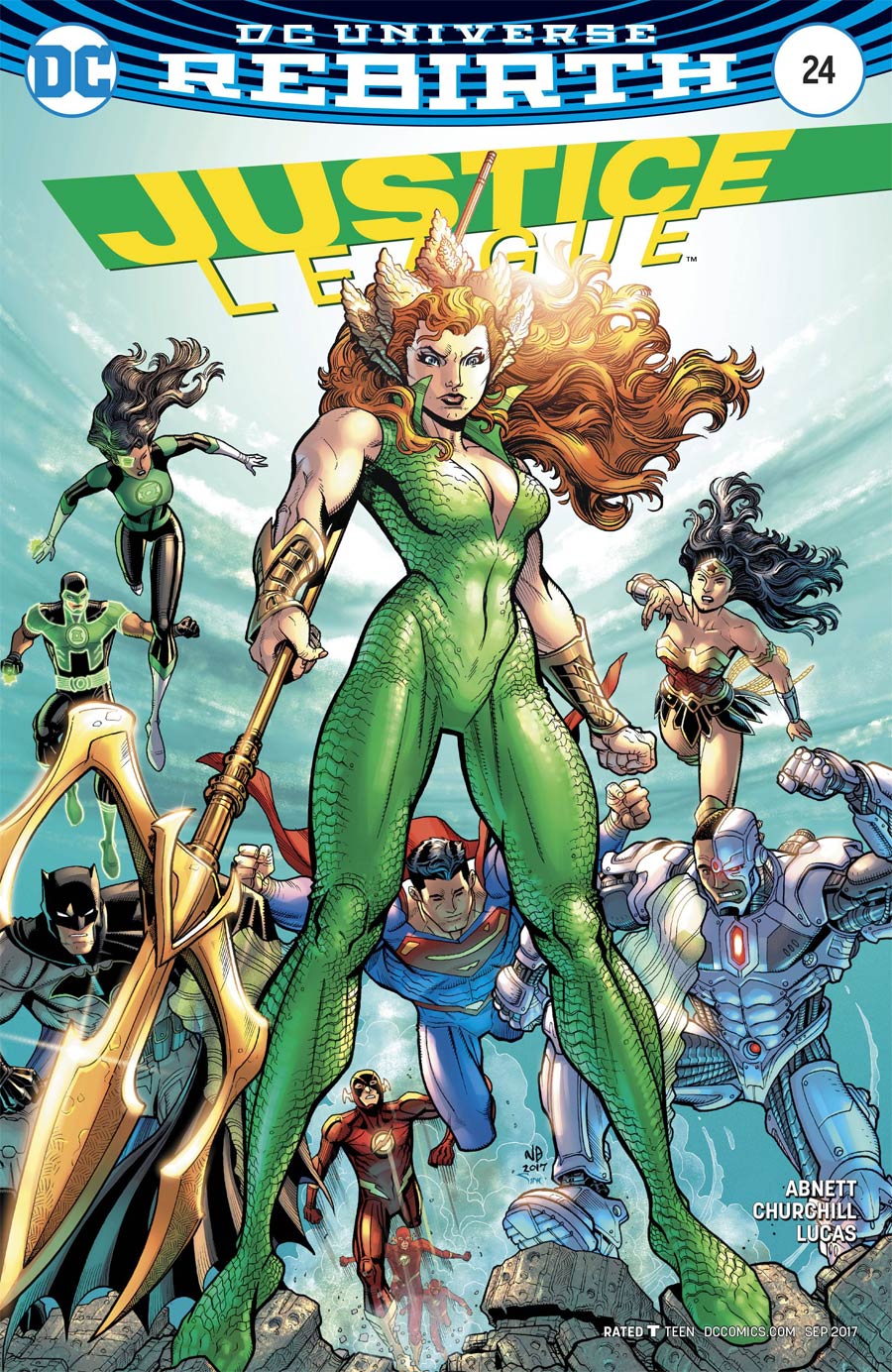 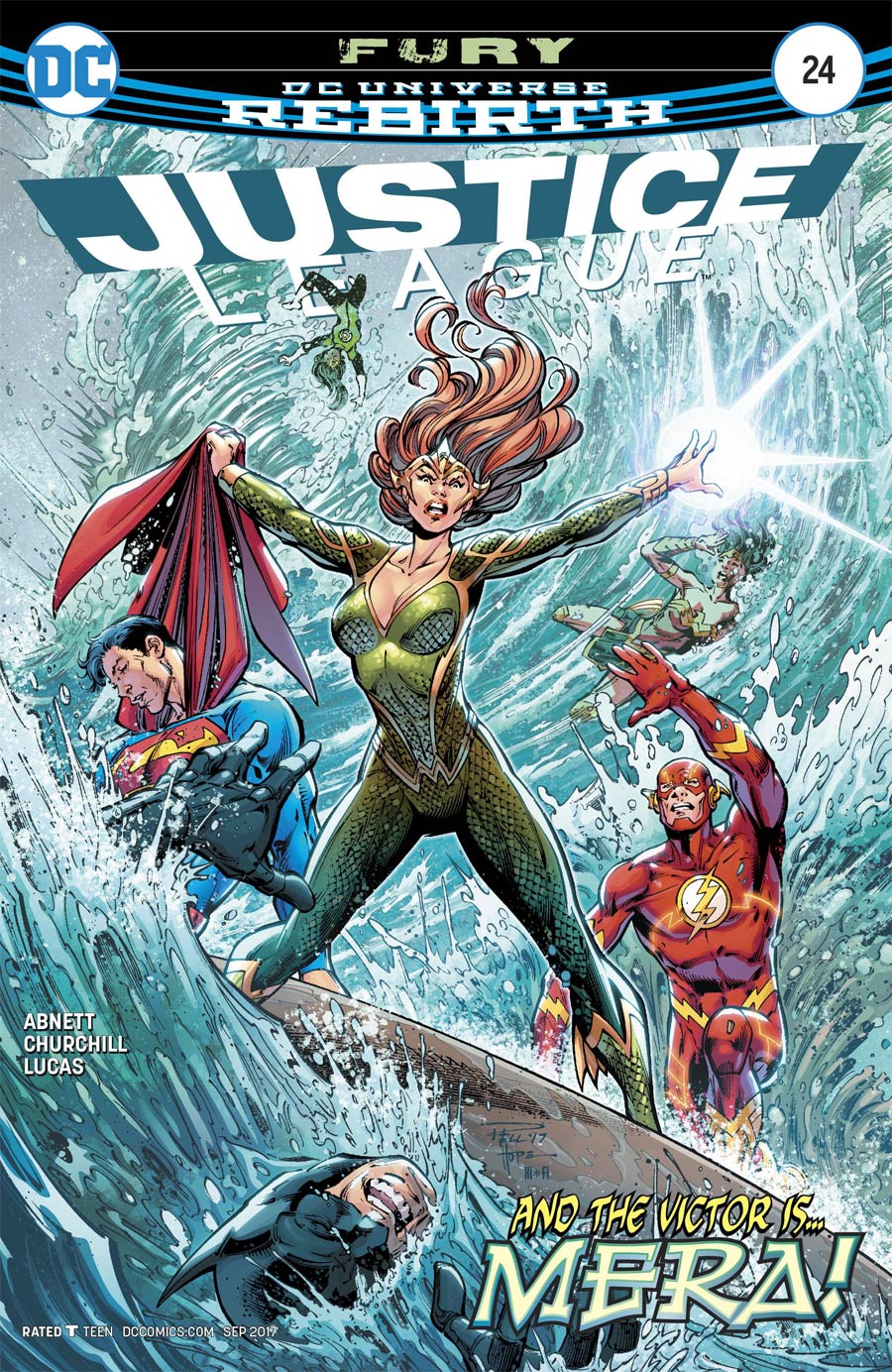 Up in the Watchtower, the League discover a powerful storm forming in the Atlantic Ocean with the focus being Atlantis. They go to investigate and Flash comments that the storm must be 200 miles wide. They also notice that Atlantis is covered in a dome, and according to Cyborg's scans this dome is unbreakable. Baz informs the group that this is affecting wave patterns and a massive tidal wave is headed to U.S. coastline. The heroes immediately head to land to see a massive tidal wave coming towards the city towering above the tallest of buildings. They immediately put plans into action to stop or at least attempt to reduce the impact.

Mera appears out of the wave and demands that the Justice League do not interfere with what's going on. The League asks for an explanation and she gives a brief summary of Arthur being cast down as King and that she cannot enter Atlantis because of the barrier (for more details see Aquaman #24 and #25). Superman and Wonder Woman attempt to calm Mera down, she responds by commanding the ocean to take them away. A fight ensues; first she disables both Baz and Jessica by putting water between their rings and flesh causing the rings to come off their fingers. Next she dehydrates Flash by pulling water out of him causing him to cramp up. Cyborg tries to get to her and she creates a tornado made of water and engulfs him. Batman attempts to sneak up on her, but she catches him and starts to choke him but he has a plan and pulls out a Hypersonic Screamer which stops Mera's assault.

With Mera's rage subsided she explains to the League that they can't help her because they are surface dwellers and an attack on Atlantis by a surface dweller is an act of war, the one thing Arthur always tried to protect from happening. The League says they will help her but only if she wants their help. They take her to the watchtower to discuss what to do next. Baz interrupts and says their assistance is needed as Hate Drones have been deployed in Pakistan. Batman suggests that Mera comes with them. Baz questions if that's a good idea considering what she just did to them, and Batman replies, "Exactly, you saw what she did to us".

Next up: The oversized 25th issue.

Story - 4: To someone who does not read Aquaman this story is confusing in a couple of ways. What is going on with Atlantis and is Mera really this strong that she could take out the entire Justice League on her own? While I am sure the League was probably holding back and pulling punches, Mera made it look quite easy for a few pages. In my opinion this story would have been better served as an Aquaman Annual or even as just the next book in the Aquaman series, as the story really had to do with what has been going on in that title. Unless of course the object was to get Mera on the team and she will be hanging around for more than just an issue or two, in that case mission accomplished. With all that said it was an enjoyable read and I would recommend it.

Art - 5: With the exception of the very first page, I loved the art in this issue. Ian Churchill has always been one of my favorite artists but the pages in the ocean while Mera is battling the League are some of the best work I have seen from him. If you are one who buys a book for the art, you won't be disappointed.

Cover Art - 5: This is one of the rare times where I struggled which cover to pick up. Both featured Mera prominently on the cover. Both were clean and well executed. In the end I opted for the main cover, but either one was stunning and worth picking up.