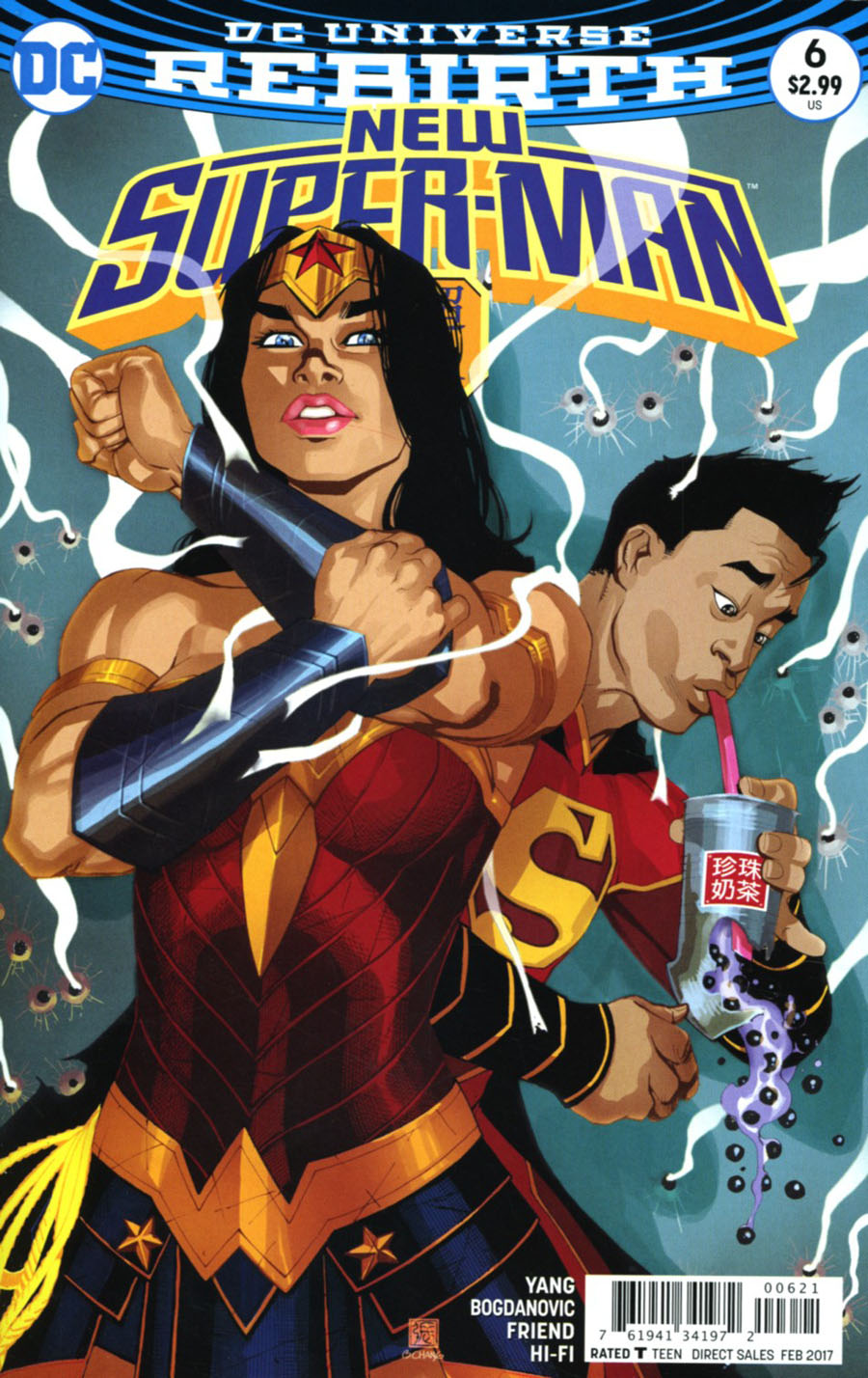 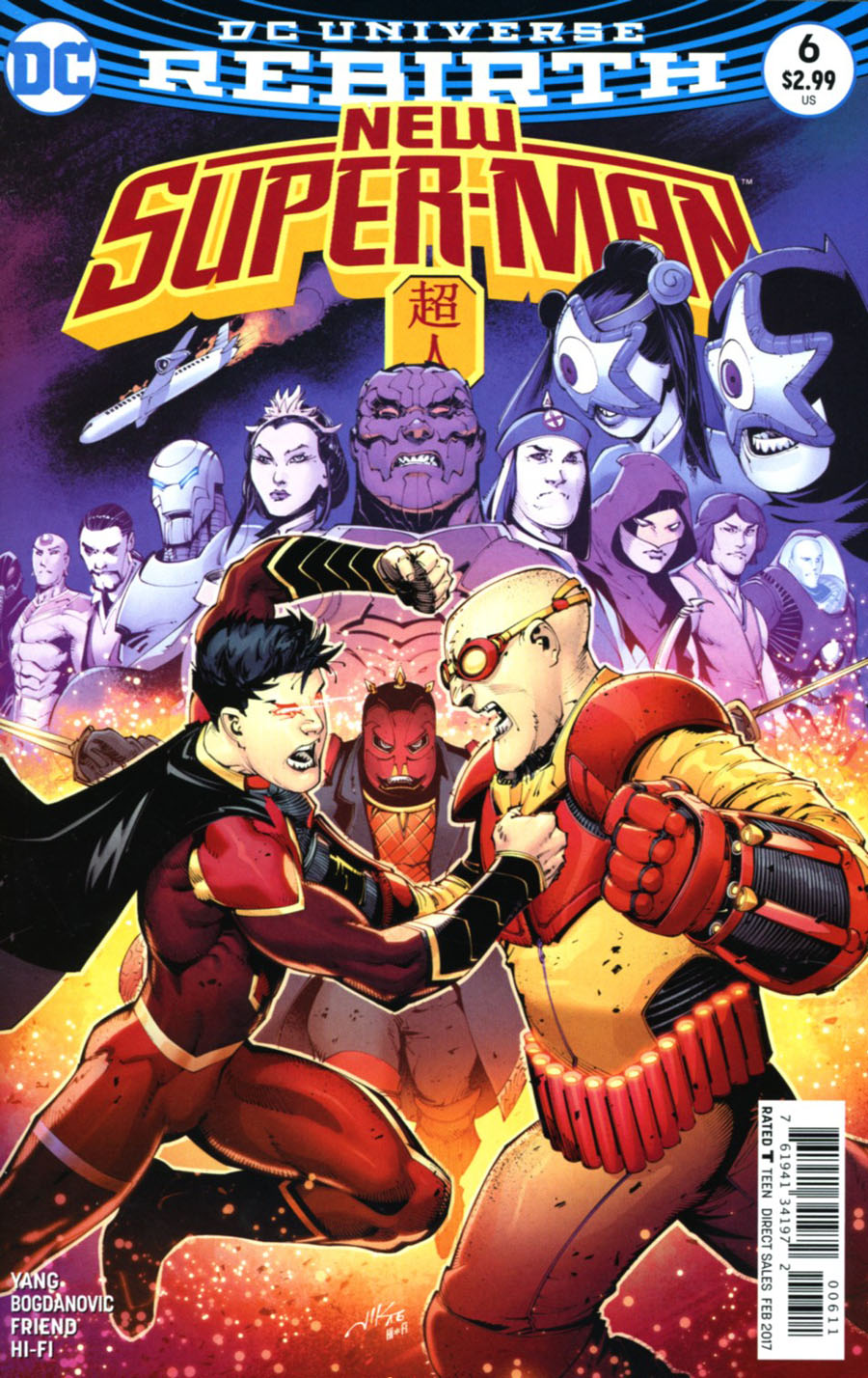 "Made in China" - Conclusion

At the Center of the Chinese National Government, August General in Iron confronts Mr. Luo, the CEO of China Southeast airlines. An hour ago, China Southeast flight #28 was hijacked by the Freedom Fighters. With the Justice League of China defeated, only The Great Ten can stop the Fighters from unleashing the Genetically Modified Starros on government officials and creating political change through mind control. August General in Iron proposes neutralizing the threat, but it would require The Great Ten to destroy the plane, resulting in the demise of everyone on board, including Mr. Luo's son. Mr. Luo tells The Great Ten to do what must be done, and the group flies off.

Kenan and Zhongdan are in pursuit of the Fighters. Dr. Omen informs them that they have twenty minutes to stop them before The Great Ten show up and destroy the plane. Remembering what Mingming told him last issue, Kenan focuses Superman's qi to grant him the ability of flight before jumping out of their aircraft. As Kenan makes impact with the plane, he finds that while his flight had not been restored, his invulnerability had. Zhongdan lowers the airlock as Super-Man punches a hole through the roof.

A battle erupts as Kenan and his father enter the plane. Human Firecracker throws a GMO at Kenan, who catches it before it reaches his face. Folding Paper Man attacks Kenan from behind in the form of a ninja star before returning to his human form. Kenan takes the GMO and slaps it on Folding Paper Man's face before doing the same to Ghost Woman, and Blue Condor. Still in control of the GMOs, Firecracker orders those under his command to kill Kenan and Zhongdan. Kenan makes a break for it as he remembers that the original Star could be defeated by extreme cold. He finds Deilan and attempts to free her from the GMO's control, but finds that his freeze breath does not work. Wonder-Woman throws him down the aisle where Kenan is greeted by Lixin, the boy Kenan bullied in the first issue. Miraculously, Lixin is not under the control of Firecracker and tells Kenan about a freezer in the galley.

After failing to free Deilan, Kenan grabs Baixi and shoves his face into a container of ice. Bat-Man is freed. With Kenan preoccupied with Deilan, Baixi is given time to hack his bat-respirator. To save everyone on board, he needs Kenan to create a hole no larger than the respirator. Kenan kicks a hole in the cabin wall, and Baixi's respirator hyper-freezes the air. The GMOs are subdued, but Human Firecracker remains to be dealt with. As Bat-Man and Wonder-Woman distract the Freedom Fighters, Kenan makes his way to the cockpit. Outside of the airliner, The Great Ten arrive. A momentary alliance is formed as the JLC and the Freedom Fighters unite to prevent The Great Ten from destroying the plane.

In the cockpit, Kenan arrives to find Firecracker and Zhongdan in combat. Firecracker commands his soldiers to attack, but discovers he has no army left. He attacks Kenan with a blast from his arm cannon, which Kenan promptly destroys. Aware of Kenan's loss of power during moments of fear, Firecracker blasts Zhongdan. Kenan loses his invulnerability and is beaten down by Firecracker, who gives a speech about the embodiment of ideals. Kenan figures that Firecracker's weapons have kept the cockpit warm enough to allow his GMO to live. Super-Man tears the GMO from Firecracker's face. Zhongdan pushes his son out of the way just in time to shield him from Firecracker, who had turned his body into a literal human firecracker.

Outside, Deilan sees that the plane is turning around. Kenan contacts Baixi and Deilan, asking them to return to help fly the plane. In the cockpit, Kenan pleads for his father to hold out until they reach a hospital. Zhongdan tells Kenan to fight for the people as he passes away. Kenan holds his father in his arms.

Journalists bombard the JLC with questions as the plane lands. Super-Man is finally considered a hero by the people. Distraught, Kenan walks past all interviewers, including Ms. Lan. Later, Kenan, Deilan, and Baixi stand over Zhongdan's grave. Kenan believes Dr. Omen might have been behind the death of his mother. Deilan and Baixi offer to help Kenan in his investigation.

At the Oriental Pearl Tower, Kenan speaks with Mingming about Superman's qi and how to better channel it. Mingming gives Kenan a business card and instructions to visit Master I-Ching, her martial arts master. In the Ministry's mountainside research laboratory, Dr. Omen enters a heavily secured room. A regeneration container rests in the middle of the room with Zhongdan's body floating inside. Dr. Omen hints through dialogue that she is Zhongdan's wife.

Story - 5: Wow! There are so many great things about this issue, and Yang deserves praise for his work. The moments between Zhongdan and Kenan are heartfelt, and their interactions feel genuine. The scene in which Zhongdan dies carries such emotional weight behind it as he realizes the errors of his ways and tries to pass on one final piece of wisdom to Kenan. It's only one page, but Yang makes that page count.

The action is well-done, and I appreciate the moments that require Kenan to use his wits. Baixi and Kenan have some great moments together, and I look forward to seeing their friendship grow. The last few pages leave me eagerly anticipating the next issue, with the last page in particular leaving me the most intrigued.

Art - 5: Bogdanovic is fantastic. The emotional scenes carry real weight and action scenes are dynamic. I cannot give him enough praise.

Cover Art - 5: An explosive cover for an explosive issue! Eye-catching and well-rendered.

Variant Cover Art - 3: I don't really get this cover. It's well-drawn and all, but I don't understand the decision to include Wonder Woman. Unless there was a company-wide Wonder Woman variant theme that I'm unaware of, this feels a bit off.