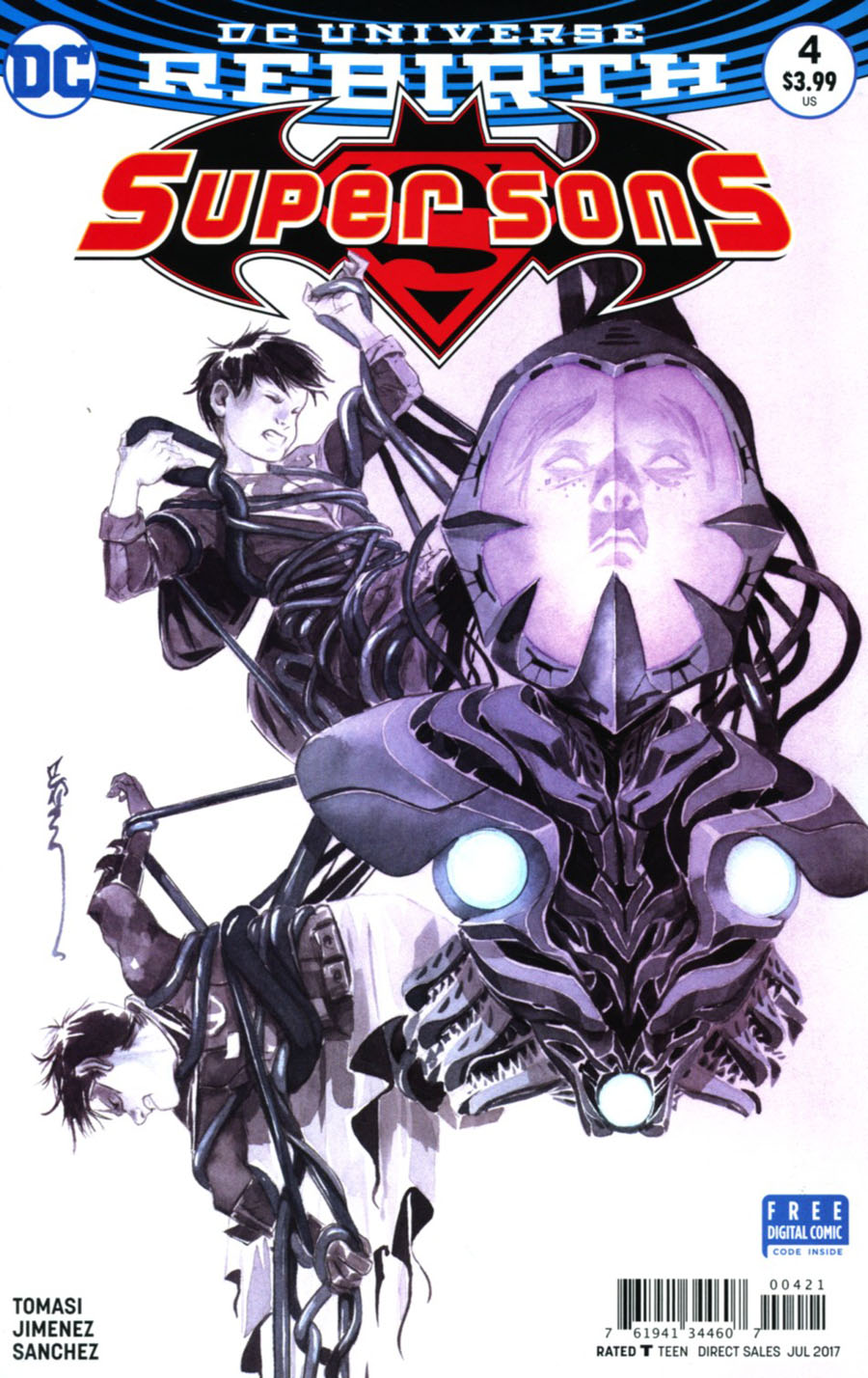 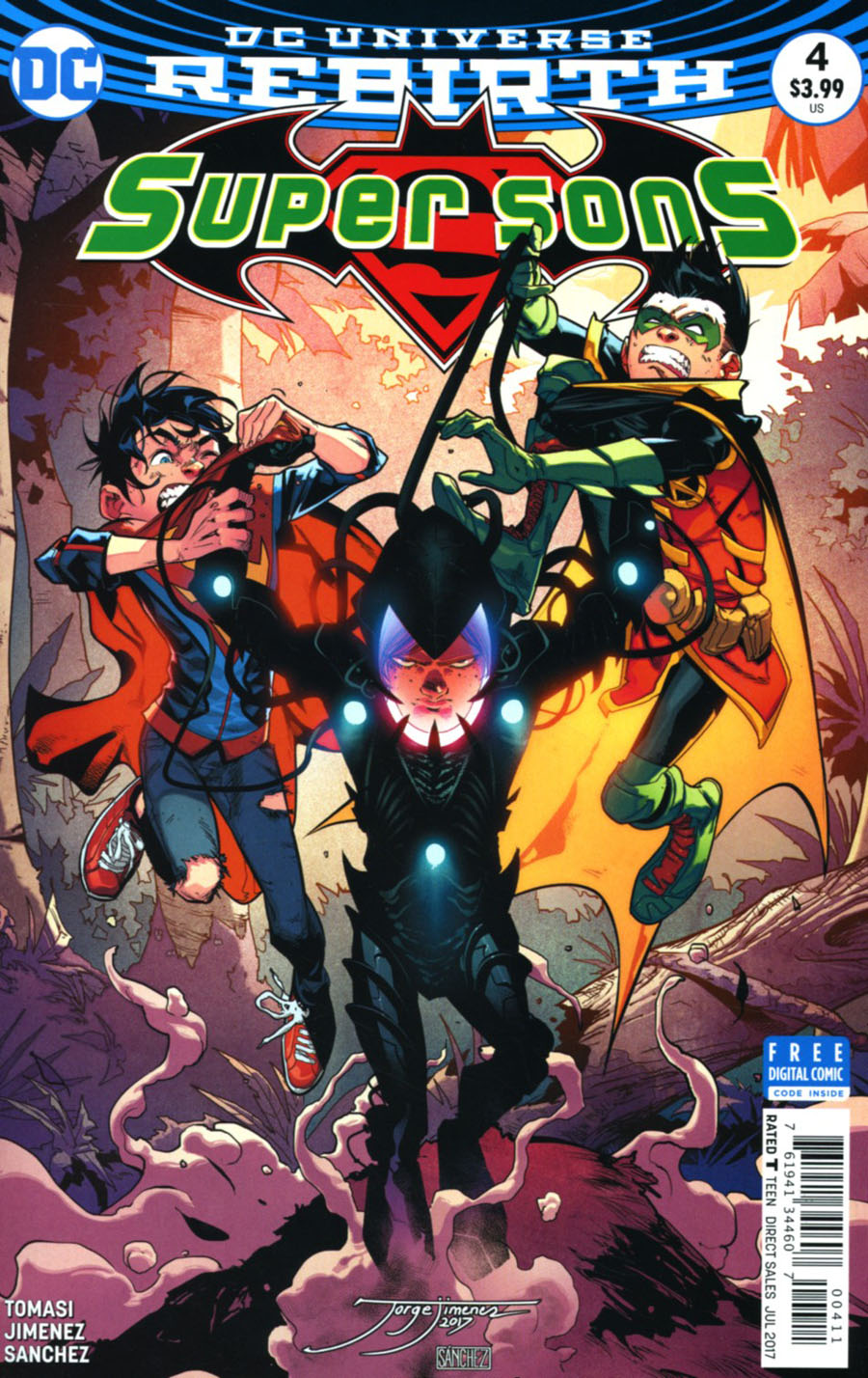 Reviewed by: Keith Samra
Click to enlarge
We open with Lois and Alfred going to wake up Jon and Damien from their rooms at the farm and at Wayne Manor. Both discover that the boys are not in bed as they should have been.

Elsewhere the boys are tied up and caught in Kid Amazo's compound. They argue amongst each other, blaming one another for them having been caught.

Kid Amazo boasts how they are no match for him, and that it's almost time for him to wipe them all out, including his family for real this time.

Lex Luthor bursts in, Robin explains that he had sent a message out to him before they got captured using one of the Amazo-Bots from last issue.

Lex frees the boys, tells them to get the rest of Kid Amazo's family out of there, while he takes care of Kid Amazo and his Amazo-Bots. The boys do so, they take the family and find a safe space for them, and they head back to the compound with Sara to help Lex.

Kid Amazo attempts to pull all the Amazo-Bots into his armor to take them all on, when it all becomes a bit too much for him, and Sara uses her powers to pull the Amazo armor off of her brother.

Lex gives the boys a lecture, while telling Sara that he sees a lot of potential in her, and that he can help her become a better young Super Hero. He turns his attention to the boys, only to discover that they have slipped away.

Jon manages to leap his way with Damien on his back all the way back home to the farm. The boys continue to bicker amongst themselves. As Jon tries to sneak back into his window, he is confronted by Lois and Alfred...

"You boys had better start talking... and Quick!"

Story - 5: A great climactic ending to a great first story arc. Tomasi really managed to keep the action and suspense consistent throughout this chapter of the arc.

Lex was a surprise I didn't expect to see this issue, but it makes sense that Damien would call him. He's too proud to call Superman and Batman, and I loved the line he spoke to Lex "I'm Robin old man... Batman's better half". Damien really believes that he is that good. That's why I love the scenes where he is bought back down to Earth by Jon. Hopefully Alfred also does that next issue for the conclusion/aftermath.

The constant bickering amongst the boys is a great bit of writing, they actually sound like real kids arguing. "Great news Superboy, Kid Amazo was able to use your powers better than you". "Yeah well, maybe you could try flipping a lot to get us out of here". I haven't enjoyed reading such comedic moments in a comic and laughing out loud since the Peter David Young Justice series. Tomasi is a genius with the dialogue. He is fast becoming one of my all-time favorite comic writers.

The next issue promises to be a good one too. I really want to see what Lois and Alfred will cook up as punishment for the boys. And will their fathers find out? They have both exposed themselves to Lex Luthor now, and I can't imagine Clark or Bruce being too thrilled by that. Previously in Action Comics, Clark went to great lengths to make sure that Luthor didn't see Jon that time in Metropolis, when the "Godslayer" took Lex to execute him for crimes he has yet to commit, and now that Lex knows there is a "Superboy" out there, what will he do with that information? We all know that Lex is dubious, after all, he gave Amanda Waller a piece of Kryptonite in the issues of Suicide Squad to take control of General Zod, so it's safe to assume that he will want to learn more about Jon. Even that scene with Sara, where he tells her that he can help her be a better Superhero if she would like, casts suspicion to his intentions. Also, the rest of Kid Amazo's family and Kid Amazo himself just happen to be in his grasp.

There is so much future potential for this title, I love it! Again, my honest plea, if you are not reading this book, you really need to! It is a perfect mix of humor and super heroics, one of the lighter sides of the DCU at the moment, also one of the best.

Art - 5: Jorge Jimenez, honestly, he is 50% the reason why I love this book so much. Hands down, the kinetic energy that flows from page to page has me awestruck every month. Sometimes it just feels that the images on the screen come to life (I read these digitally, while also collecting the hard copies).

I love that Jorge is getting better with each issue. The way his panel work is laid out per page, perfectly fits the pace of the story. Case in point, most of the issue, the panels are standard square/rectangle, but when the action starts as the boys head back to the compound to fight Kid Amazo, they distort triangularly, quick cuts to different scenes. This is taking what Neal Adams was famous for, and bringing it to a whole new level. A true master of his craft!

I also love that he experiments with different points of view throughout the book. There is a wonderful worm's eye view of the boys as they flee the compound and the pseudo bird's eye view when Jon punches Kid Amazo away from Lex, this wouldn't look as effective if it were just a level eye shot!

The first is Superboy carrying Kid Amazo's family out of the compound. We all know that Jon is strong, but this panel reminded you just how much strength he does have, as he carries 3 adults on his shoulder.

The second features Jon again, as he uses his "super breathe" to blow away the Amazo-Bot, a funny scene, but like I said, perfectly illustrates the amount of power Jon houses in his small frame.

And finally the third is the hero shot of the boys as they confront Kid Amazo back at the compound, Future World's Finest for sure.

Jorge is one of the best artists at DC right now, I hope they keep him around as long as possible. He kills on Superman and Super Sons.

What can I say about Alejandro Sanchez colors? I've stated in the past that he is perfectly suited to Jorge's art. The Alex Sinclair to his Jim Lee... So vivid and vibrant, they really inject life into the book. I love the colors on the shot of the boys at the end, leaping away. It really feels like a nice sunny morning.

I hope these two become a stable at DC, used as a benchmark for new comers to the industry.

Cover Art - 5: The boys take on kid Amazo in the Amazo armor on this month's cover. This is the first cover where the boys look as though they are not in control. I like the cover a lot because of that. Jorge and Alejandro have managed to inject a lot of the story in the cover. Great piece of art, and a wonderfully effective cover.