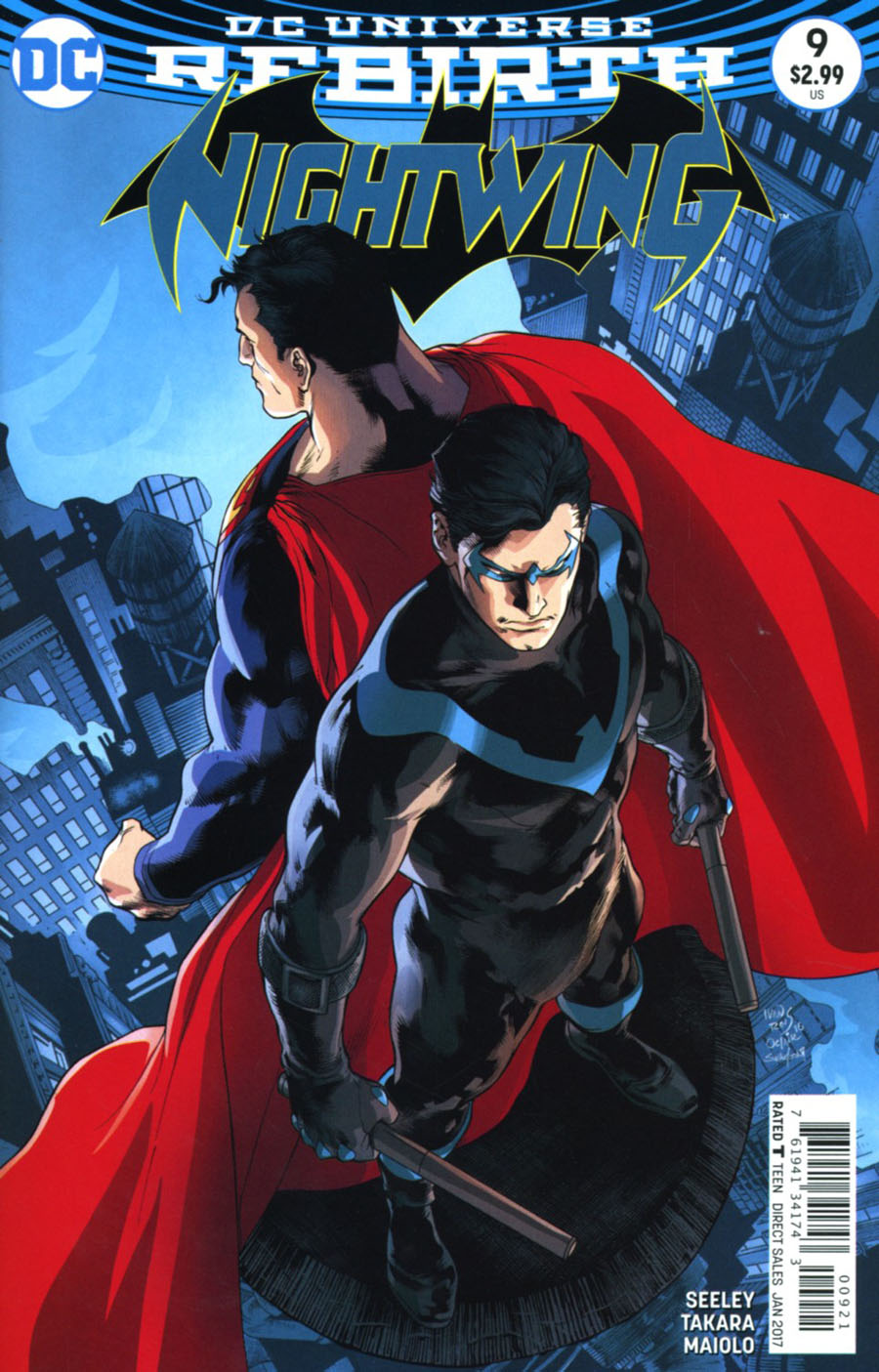 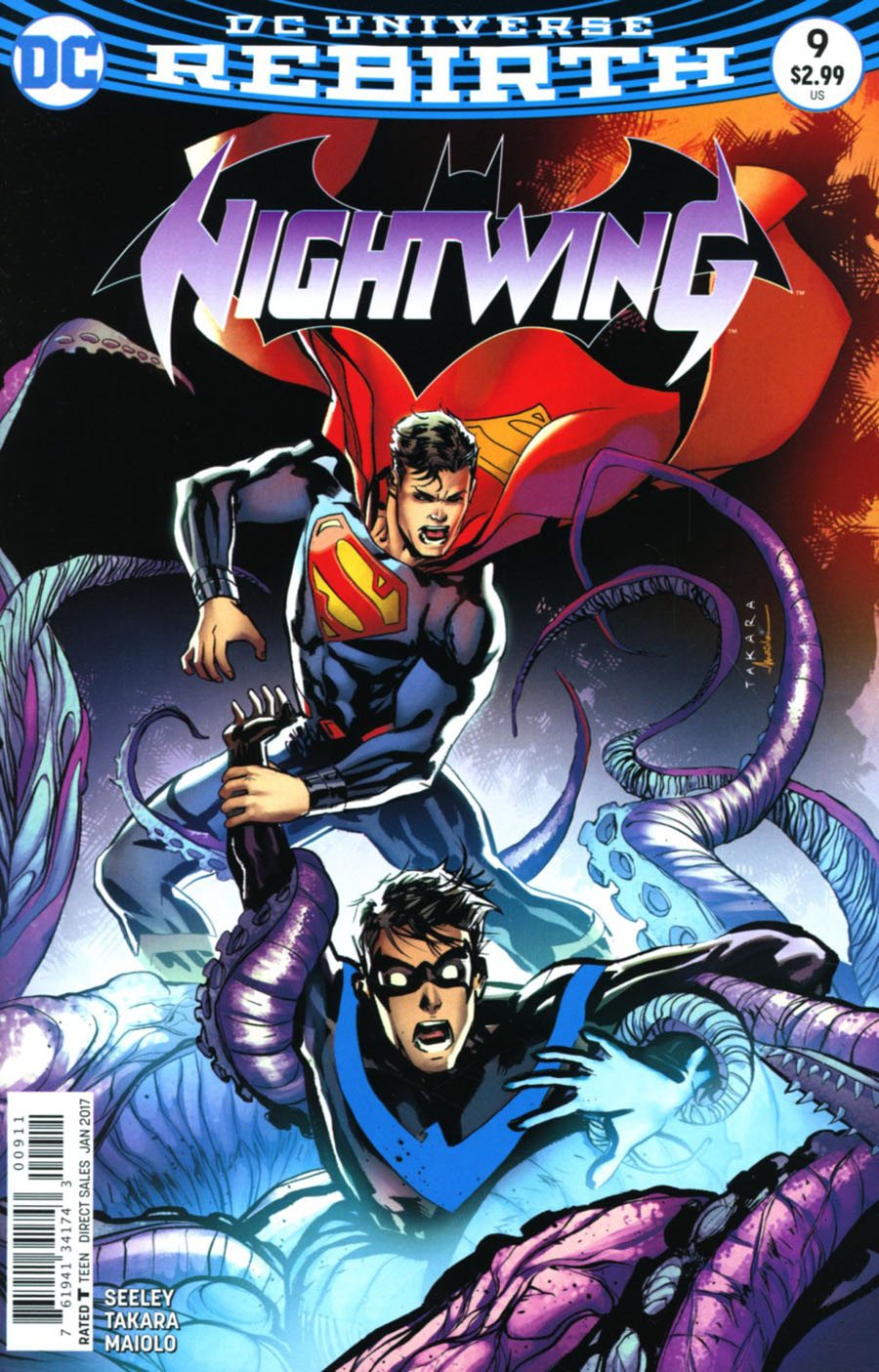 "Rise of the Raptor" - Conclusion

Nightwing was on a personal mission to take down the Court of Owls spread around the world. He is aided by a mysterious operative Raptor, who has ties to his days in the Haley Circus from his childhood.

Dick Grayson is having nightmares of his team The Titans all dying in action. He wakes to discover Superman at his window. Superman takes Nightwing to the Fortress of Solitude, and explains that Dr Destiny may be causing his recent nightmares. Superman goes on to tell Nightwing hat he wants to gain his trust, and that the Nightwing from his world was a good friend of his, and would like this Nightwing to be his friend also. Nightwing is skeptical of this Superman, telling him that the Superman of this (New 52) world was a good friend of his.

They go into Nightwing's dream-scape, using technology from the fortress. While in there they run into Dr Destiny who is wreaking havoc. They both start to get beaten down by Dr Destiny, when Superman explains that Nightwing need but only remember those times that he had been successful in the past. When he does this, he see's Superman (New 52) of his world and Red Robin (Tim Drake). Who help take Dr Destiny down. Nightwing happy that he is once again reunited with his lost friends, learns that they will always be with him. Dr Destiny makes one last attempt to attack Nightwing and Superman, when Nightwing is able to summon multiple heroes to aid him, seeing as they are all in his psyche.

They take down Dr Destiny and also the criminal organization called Cobra. The Justice League come into clean up. Batman thanks Superman for the assist to Nightwing, then offers Nightwing a ride home. Nightwing agree's, and asks Batman if they can take a detour through the city of Bludhaven...

Story - 5: I've always been a big fan of Nightwing. I've collected his various series over the years, so when Rebirth came along, it was a no-brainer for me.

This issue was very inception like, an obvious way. It was a great little interlude from what's been happening in the previous story arc. The use of Superman was perfectly handled. I love that Superman and Nightwing are friends in the universal sense. I also love that they kept the origin of where Nightwing's got his name from, by keeping it tied into Superman lore.

Superman reaching out, and asking Nightwing to call him "Clark" showcased the amount of trust he has in him. Was a real "Superman like moment". Tim Seeley really has a good grasp of the character.

Another thing that I really enjoyed was using this interlude of an issue to reestablishes Nightwing to the city of Bludhaven.

A great issue and a great series. I urge anyone that is even a little bit curious to at least check out the trade once its out.

Art - 5: I've been familiar with Marcio Takara's work for a little while now. I was a frequent visitor to his Deviant Art page at deviantart.com. His visuals flowed nicely, and I like the Pre-Flashpoint call backs with Doomsday, Superboy Prime, The Key and Mageddon.

His rendition of Superman was iconic looking, as well as very youthful at the same time. I'd love to see him tackle an issue of a Superman comic one day.

Marcello Maiolo perfectly accents Takara's art with the colors! A great job with the reflections and tone!

Cover Art - 5: The main cover is very eye catching! Marcio Takara did a fantastic job with it! I also liked the Ivan Reis variant just as much. I love the birds eye view of Superman and Nightwing.