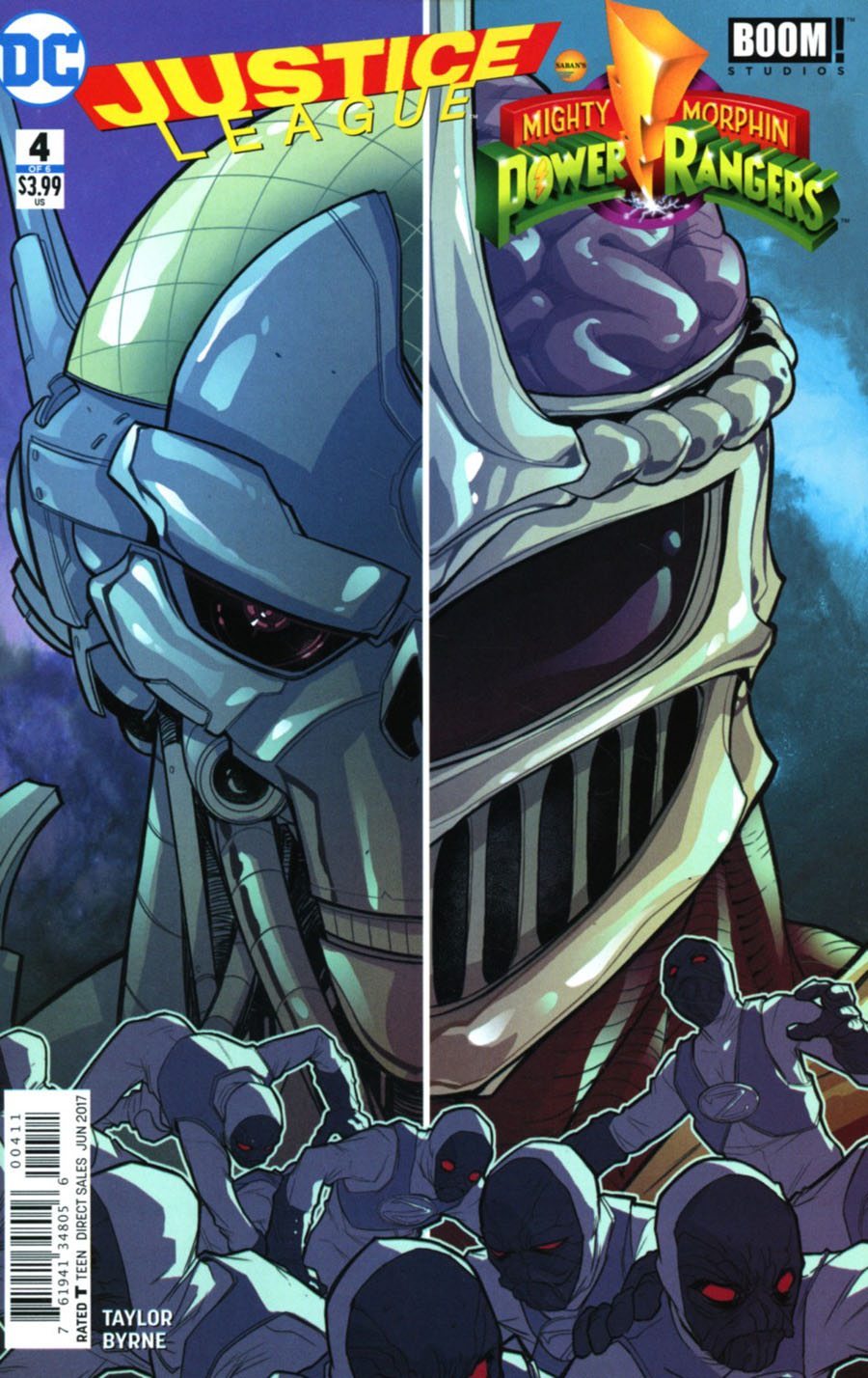 Reviewed by: Keith Samra
Click to enlarge
Picking up from the last issue, the Power Rangers and the Justice League are in Switzerland to the Cern facility to open up a doorway to the Rangers world. After having worked out the math, Superman and Wonder Woman fly the Super Collider to orbit with Green Lantern's help, and open a door way to the Power Rangers' Earth.

Once there, they realize that Brainiac has already started the process of shrinking down Angel Grove, and taking it to his ship. Zack the Black Ranger manages to see his parents before the whole city disappears and is transported to Brainiac's collection on his ship.

The League equips the powerless Rangers with weapons from their arsenal, and head into orbit to infiltrate Brainiac's ship.

Once there, Superman is able to retrieve the Rangers power coins, so they can morph into their Power Ranger forms, but before this happens, Brainiac takes over Cyborg, and turns him against the League and Rangers alike. We end with Billy the Blue ranger, skewering Cyborg in the torso as he says "I'm sorry Cyborg, I'm really sorry"...

Story - 5: Well, I did enjoy this issue quite a bit. The start was a little slow, but I'm guessing if you read the whole story together, it will flow a lot better. Plus it's always good to have all the math and science worked out.

So now, we are four issues in, and it's evident that Zack and Superman are the main characters from each team. In issue one, we see Superman consoling Zack at the loss of his city. This issue catches us up to the present, so now we know that Angel Grove has been taken by Brainiac, and as Batman explained, Brainiac will be back to destroy the rest of the planet soon enough.

Going back to Superman, I like that Tom Taylor used him sparingly and in the right spots. Such as having Superman fly out to distract Brainiac's ship, while the others snuck in covertly. It would have been far too easy to just have Superman smash his way in. Also I like that the League worked out the best solution and didn't just go to the Fortress of Solitude or the Batcave and have an "inter-dimensional portal generator transporter" just sitting at the ready. So a good use of science, geography, which led to the awesome moment when we got to see Superman and Wonder Woman carry he Cern Super Collider into orbit, with Green Lantern using his architectural know how to support the whole base, especially in the areas that needed it most. A great use of characters, their strengths both physical and literally, and also fantastic writing there on Tom Taylor's part.

Nice to see Cyborg have a bit more screen time again, and it actually makes sense that Brainiac would try and take over his system interface and use him as a weapon against his teammates and friends. As the League and Rangers closed in on Brainiac's ship, I had thought to myself, "I wonder if Brainiac could take over Cyborg if he were to tap into his ship". This of course was the case, and having partially guessed this, it still didn't feel predictable.

This is actually turning out to be a great little crossover, reviewing this series actually prompted me to go watch the live action movie that came out a month or so back, which in turn, turned out to be a lot more fun than I thought it would be. I'm excited for the next chapter, so I'm glad that Steve asked me to review this for the Homepage.

Art - 4: Steven Byrne does another good job on the art and coloring with this issue. I like when an artist can capture emotion in his/her facial expressions, and Byrne sort of excels at that with most of the core characters. I love the way you can feel Zack's anguish on the first page, as well as when he sees his parents trapped inside Brainiac's force-field. Also The Flash's infectious smile as the Rangers go through and pick weapons from the arsenal Batman bought with him.

Was fun to see the Rangers dressed up as characters from the DCU, you can see which stories/runs Byrne cherry picked from. From Prometheus' helmet to the Earth 2 Lex armor by Grant Morrison. And the obvious animated series influence as the Yellow Ranger puts on Hawkgirl's mask/helmet.

I like the updated design of Brainiac's ship. Byrne has a good handle on drawing tech, and also has the coloring aspect of it.

Now on to what I didn't feel worked too much. As I've stated before, Byrne has a cartoonish style, yet he grounds it in reality a fair bit. His proportions are pretty much on the mark, which is at times a detriment to his facial work, and minimal line art style. I'm not about to tell someone how to draw, especially a professional in the industry. What I mean by detrimental, is that if he were to possibly exaggerate body sizes and even make his figure work a little more "dynamic," it would make the page "pop" a little bit more. With that said, because he is taking on the art and coloring chores, he may be spending less time on the line art aspect of the art. And with this issue, it's the first time I felt that maybe his coloring style is overshadowing the art. Maybe it's just me, but I just felt the colors too overpowering this issue. However, his art still conveyed the story perfectly. Great work and I look forward to seeing more of it in the future.

Cover Art - 4: Karl Kershl did a pretty good job with this issues cover. I like the split screen effect of Zedd and Brainiac, with the putties below. It may not be "Grab Your Face" exciting, but it is pretty effective!